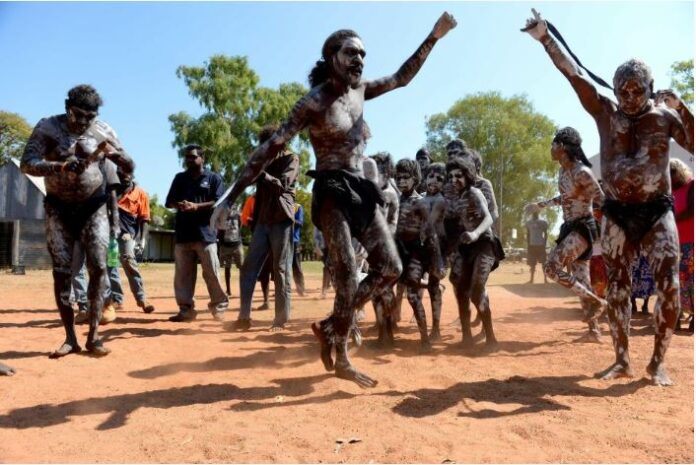 In 2001 I left Australia and I didn’t return for over ten years. Not long after I got back I went to a cricket match with some buddies. I was pretty excited as I’d missed out on cricket for a long time.

The game was about to start when I noticed some dignitaries wandering out to the middle of the field together with some aboriginals dressed up in traditional stone-age garb.

You know, the usual loin-cloth and mud coating stuff when your culture hasn’t bothered to invent little things like the wheel.

“It’s the Welcome to Country ceremony,” he said.

I stared at him blankly. “It’s the what?”

He repeated what he had just said and then he told me that we had to stand up. The whole fricking stadium was standing up. Not knowing any better I got to my feet, but I wasn’t happy.

What followed was rather excruciating. While a couple of aborigines blew on didgeridoos and some others danced in a circle bashing together some sticks, one spoke into a microphone.

It was a long and drawn out garble about how we were welcome to their home and they were giving us permission to be here and crap like that. I was thinking to myself, “But this is my home. Why do I have to be welcomed to my own home?”

I sat down with the others with the firm resolve never to stand or sit through one of these ridiculous “ceremonies” ever again.

You have to understand that when I left Australia in 2001 this so-called ceremony didn’t even exist, and if it did, nobody knew about it.

Ten years later and not only was it being used to start sporting events but the Australian Federal parliament has to sit through it at the beginning of every day. I mean, how many fricking times does someone have to be welcomed to country?

“But we did it yesterday.”

“Yeah, well we have to do it again in case you forgot.”

This underlines the utter absurdity and mischievous nature of this entire debacle. The welcome to country ceremony is just a nice little way to constantly remind ordinary Australians that they don’t belong here.

It isn’t even a part of aboriginal culture. By all accounts it was invented back in the mid-70s by some performers. And how much does this little ceremony cost?

Geez, that’s not bad for ten minutes work, is it? Imagine if you had the gig to open the Federal parliament, every fricking day.

You can’t even pay Elders directly. Perhaps they don’t want the idiot white man’s money to sully their hands. I wonder what you’d get for opening a new parliament after an election? Does $10,000 sound reasonable to you?

As this article from Quadrant states, this “mysterious and ancient” tradition goes back about 40 years at most:

The supposedly ancient ‘welcome’ tradition goes back 30-40 years, whereas the House of Commons goes back  nearly 700 years.

Who Dreamed Up “Welcome to Country”

Indigenous entertainers Ernie Dingo and Richard Whalley, of the Middar Aboriginal Theatre, claim to have invented the “welcome to country” in 1976 because two pairs of Maori visitors from NZ and the Cook Islands wanted an equivalent of their own traditional ceremony before they would dance at the Perth International Arts Festival.

Another version is that activists shrewdly created the ceremony at about the same time to buttress land-rights claims. And Aboriginal Rhoda Roberts, head of indigenous programming at the Sydney Opera House, says the ceremonies were developed in the 1980s by members of the Aboriginal National Theatre Trust which she co-founded.

Her speaker-for-hire profile claims she personally invented the term “welcome to country” along with the protocols involved.  She would like welcomes to include marking guests with ochre and Aboriginal sweat.

Getting marked with some performers’ sweat – that sounds like a lot of icky fun for the whole family.

You’d have to wonder what sort of actual ‘welcome to country’ ceremony interlopers would have faced back in the “golden days” before Europeans showed up:

One early observer, a certain Mrs Smith, wife of a Mt Gambier missionary, noted that welcomes don’t always end well: “The tribes, like most savage peoples, were in continual dread of each other; and although they occasionally met up on friendly terms to hold a murapena (corroboree), it usually eventuated in a fight, in which one or two were killed and afterwards eaten.”

Hmm. That would be an interesting welcome to country ceremony, wouldn’t it? Eat a couple of the spectators.

Now we have the excruciating situation where private businesses are holding these ceremonies before standard meetings.

Now don’t get me wrong – they’re not paying 2 grand for a bunch of smelly dancers to come in.

No, what it usually amounts to is some clown standing up and reading off a prepared  speech where he thanks the local whatsit tribe for allowing them to use the land blah blah blah. It’s white virtue signaling gone completely bonkers. And it’s also dangerous.

The Slippery Slope to Oblivion

During the recent Australian elections, Prime Minister Malcolm Turnbull made the outrageous deceleration that Australia was invaded:

“Well, I think it can be fairly described as that and I’ve got no doubt obviously our first Aboriginal Australians describe it as an invasion,” the Prime Minister said.

Oh dear. That’s no good. But it’s merely the natural progression from doing all this stuff in the first place.

Soon there will be a “treaty”, (which is in inverted commas because you only have a treaty if you fought a war and were defeated, which didn’t happen), and a bunch of other stuff will happen and then … and then there will be reclamations of land.

Those smug businesses that actually have permanent signs on their front door thanking the local tribe for permission to be there won’t be so smug when the same tribe rocks up and says, “yeah, about that permission – we’ve decided to take it back.”

Because they didn’t give any permission. What’s all this permission s#@t anyway? I really wish someone from Ireland would come to me and say that they’re finally asking permission for the local castle after stealing it off my ancestors about 400 hundred years ago.

Because I’d tell them to go f@%k themselves and that I want the bloody thing back.

There’s even a National Sorry Day which is held every year. Every fricking year. I mean, how many times do you have to say sorry?

The answer is, a lot. Particularly if you were stupid enough to say it the first time. Just like the welcome to country ceremony. Over and over and over again.

Because once you say sorry then that is an admission of guilt. And if you’re guilty, well, that must mean that someone else has to benefit from that awful awful guilt.

All this does is drive a wedge between people based on race. Which never, in the field of human interaction, has ever ended well.

THIS ARTICLE IS FROM ADAM’S WEBSITE HERE. He has many excellent articles on there. It is definitely worth a look.