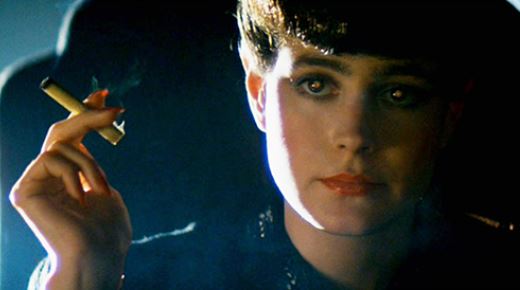 Scorching hot “Skin job” Rachel. She was one of the robots in Ridley Scott’s epic movie Blade Runner.

Adrian has been working on an interactive, virtual lip system.  Two people can use these devices to share a virtual kiss from anywhere in the world that there is a broadband connection.

In the interview, he discusses the recent rejection of his work by Leftist art curators at the Philadelphia Museum of Art.

In a move that Joseph Goebbels would have been proud of, David’s exhibition was rejected due to his Right-wing political beliefs in the right to “Life, Liberty and the pursuit of Happiness.”

This is a transcript of their conversation:

Emma: What is the idea behind your research Kissenger?

After we built these systems, I wanted to create a kissing machine that people can use to not only touch, but also kiss their loved ones over the Internet.

Kissenger is a new work based on original idea of a kissing machine, which allows people to share a kiss with each other through the Internet.

When we communicate with someone using our mobile phones now, we can only use visual-audio information such as voice, videos, texts or images.

I believe that physical touch is one of the most important ways to express our deep emotions and feelings with our loved ones.

This has been backed up by numerous research studies. Kissenger is a device to better express emotions and intimacy through Internet kissing.

Emma: How does it work?

Adrian: The device simulates human kissing through haptic stimulation on the lips. The device has a lip-like interface made of a soft rubber material, that interacts with the user’s lips and measures the lip pressure of the user using force sensors.

Underneath the lip interface is an array of actuators that generates real-time force feedback on various points of the partner’s lips to replicate the pressure sensations of kissing.

This interaction is bi-directional, so you can feel your partner’s lip pressure at the same time. The force data is transmitted over the Internet. The device is connected to a mobile phone, so that you can have a video call with your partner while using the device to send a kiss.

Emma: When did you get the invite to exhibit Kissenger in the Philadelphia Museum of Art?

Adrian: We were invited about one year ago by Michelle Fisher from the Philadelphia Museum of Art. She asked us to make the Kissenger devices for her exhibition at the museum called “Designs for Different Futures”.

We had a team of engineers and researchers who worked nearly one year and spent so much time and effort to get the demonstration ready for the exhibition we were invited to.

It cost us a lot of time and money, but we did it because we were invited by the Philadelphia Museum of Art, and we thought it would be a very good opportunity for the public in Philadelphia to be able to see our work and understand our research.

Emma: Why did they decide to remove your work from their exhibition?

Adrian: First, I received a call from Michelle Fisher and she said she was very concerned about my tweets. Obviously, she was concerned because I’m a great supporter of Donald Trump, the President of United States of America, and Steve Bannon.

It was very strange to me that I had to justify my tweets for this art exhibition, which is totally irrelevant to what I wrote on Twitter.

She also said my tweets were very rude. I don’t use any vulgarity or swear words. I use language that would be used by the President of the United States.

So why would I be held to different standards from the most powerful man in the world? What she was really concerned about was that I’m a right-wing political supporter.

At that stage she didn’t cancel our work. But when I ran in the 2019 Australian election as a candidate for the Fraser Anning’s Conservative National Party, headed by the great man Fraser Anning, then Senator of Queensland in Australia, it obviously became too much for the people at the museum.

If I were one of those fascist leftists, they would definitely exhibit my work in the Philadelphia Museum of Art.

But Michelle Fisher was so politically biased, that she was prepared to cancel our work that we agreed to work on for nearly a year, and we spent a lot of money on it.

They just suddenly sent an email, rudely terminated our agreement, and removed our work from the exhibition.

Based on our previous phone call when she was complaining about my tweets, it was very obvious that they didn’t want an artist with right-wing views.

This is a terrible act and it is no different from the Nazis who burned the books and removed artworks which didn’t conform to their fascist views.

It’s unbelievable that the Philadelphia Museum of Art would actually support this atrocious and politically biased behaviour to silence an artist based on my political views and tweets, which are totally irrelevant to my artwork.

Emma: Was Kissenger exhibited in other museums?

Adrian: Kissenger has been invited to exhibit in many public exhibitions before, including Ars Electronica Festival, one of the most prestigious media art event in Linz, Austria, that drew 100,000 visits, and VivaTech exhibition in Paris, which was a 3-day innovation event that had over 68,000 visitors.

I also demonstrated Kissenger in all my keynote speeches around the world, and each time we received wonderful feedback and a lot of people were amazed and wanted to try out our devices.

What those visitors and audiences were interested in was the technology and innovation behind our work, not the political views of its creators.

So, I think to penalise an artist or innovator by removing his work from an exhibition because of his political inclination is a really bizarre and unfair act from the Philadelphia Museum of Art.