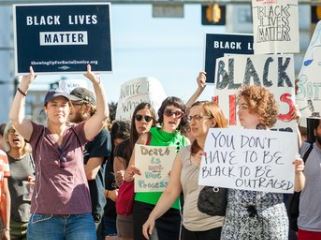 One of the peculiar things about the Black Lives Matter movement is what a small role blacks play in it.

Most recently, San Francisco’s hard-left mayor London Breed, when she sat down for an interview with Vogue magazine, scolded whites for honing in on a black movement.

I’ve commented repeatedly in past posts about the way in which white leftists have co-opted the Black Lives Matter movement (See here, here, and here, for example).

Interestingly, the most vocal white activists seem to be college-educated women. They’ve somehow managed to take the movement from Black Lives Matter to White Women’s Drama:

Another spectacular example of the White Woman’s Drama phenomenon was Robin Broshi, a member of New York City’s Community Education Council, who had a complete meltdown because a fellow council member had been holding a black child on his lap.

And then there was Oakland’s white mayor, Libby Schaaf, who had her own drama queen moment when someone mistakenly thought that exercise ropes that Victor Sengbe, a black man, had put in trees for himself and his friends, were nooses.

Sengbe was offended that Schaaf took it upon herself to tell black people, who were untroubled by the ropes, that this was a serious problem:

Bill Maher immediately latched on to the way white people are appropriating the movement:

All of which gets us to that Vogue interview. [with Mayor London Breed]The interview covers San Francisco’s myriad problems, such as its Wuhan virus response, escalating crime, drug abuse, and homelessness. However, the interviewer, André-Naquian Wheeler, began with the “large numbers of white people [who] are coming out to protests,” something he, as a black man, sees as “a complicated development.”

[London] Breed responds that, on the one hand, she’s pleased that whites are taking the problem seriously. “It gives me hope. It’s like, finally, you guys understand what we’re talking about.” Having said that, though, Breed is extremely unhappy that whites, having become woke, insist on whitesplaining and taking over:

One of the things that most disturbs Breed is that whites, having co-opted the Black Lives Matter movement, are busy turning it into an “All-Lives-Except-For-White-Lives Matter” movement. She has no room for the left’s beloved intersectionality:

And then there’s White Fragility, the huge bestseller by Robin DiAngelo, another white woman. According to John McWhorter, a professor and regular contributor to 1776 Unites, a black website dedicated to America’s core values, the book is one enormous condescension to blacks.

“I have learned that one of America’s favorite advice books of the moment is a racist tract. Despite the sincere intentions of its author, the book diminishes Black people in the name of dignifying us.”

There is a schism coming very hard and fast as black people, many of whom are horrified at the thought of seeing police leave their neighborhoods, watch white people, especially hysterical white women, once again tell them how to live their lives.