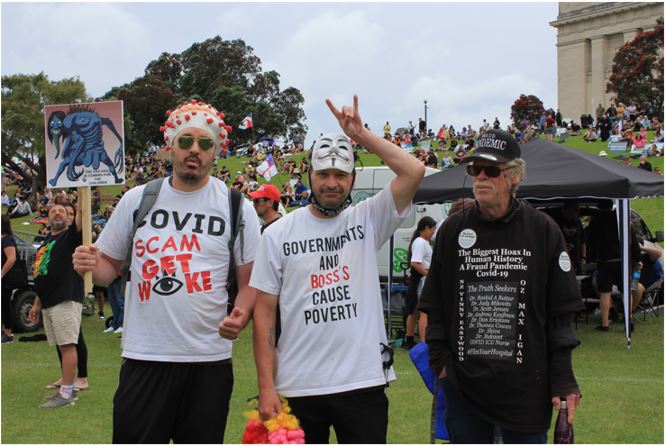 It was a fine, early December day in Auckland, not too hot, lightly overcast. A peaceful crowd of over 6,000, with not a politician in sight, gathered in the leafy Domain. On the adjacent grassy pitch, a schoolboys’ cricket game gave a feeling of village life, uninterrupted.

Above the rally site and sports grounds stands the War Memorial Museum. This is an Anzac shrine of great importance to today’s inhabitants of Middle-Earth.

But New Zealand is under siege, its people’s well-being threatened by a treasonous parliament.

Activists bore placards and wore T-shirts with strong messages, “No more Lockdowns. No Vaccine Jabs”. With deep fervour, they sang the Kiwi’s national anthem, “God of Nations at thy feet, in the binds of love we meet!”

After months of these gatherings, most participants (98%+) no longer wear the facemasks that symbolise the State’s attempt at mind control. The Spirit of Righteousness is moving in the breasts of many New Zealanders.

Here is produced scientific proof of the non-existence of the “Covid bogeyman”.

Thousands of Kiwis repeatedly stand in closeness, breathe the same air, and share an event for hours. Nobody collapses. No-one dies. No one is bedridden afterwards with an imaginary disease.

There’s your solid evidence. No “Super Spreader” event, despite the media sneers. Of course, the media lied to the public about safety and the need for masks and social distancing. And Mr Global owns the media.

These events demonstrate that there is no need for the “Bioweapon Jabs”. Big Pharma and Pfizer do not belong here.

People are naturally healthy. Those who are ailing, as always, require our special consideration but not injections with bioweapons.

We judge as traitors those interfering politicians who, at Pfizer’s beck and call, tell us what to do and how to think. Kiwis are turning away from the parliamentary system.

They plan to run their country on principles of Localism. No more politician’s mandates. We reject Mr Global’s plans for us. Only traitors and grifters sup with him.

Other countries show similar signs of civil unrest. To solve the sickness of failed central governments, the activists are re-learning the meaning of Localism. Then they spread the vision through the land, like a Contagious Positive Mind that brings healthy elements to society.

Common folk rise up to protect their lives and families from nasty State intervention. They are learning how the banks, schools, universities and economy have been stolen by agents of Mr Global. So they curse the globalists and their satanic agenda.

The parliaments of Australia and New Zealand now operate outside of and in opposition to the people’s long-cherished Civil Rights and established Freedoms.

The globalist’s final attack employs the State to strike against the sanctity of each person’s body and mind.

Politicians have gone mad, their spirits vaccinated with a brew of money, power, fear, and greed. For they have bet the farm on a gamble with Big Pharma.

They sold us out for Mr Global’s promise of a seat on the digital world spaceship that will whisk them to an eternal transhuman paradise. But their weekly paychecks still come from our taxes.

Those gathered at Auckland’s Domain were calm, peaceful, loving, and good-humoured. At the core of a healthy person is a place of sanity and decency.

What motivates a person to brush past the push and pull of intensive and ceaseless media propaganda?

To walk by tens of thousands of posters, billboards, and warning signs? To side-step each yellow-striped alert that heralds the advent of a dreaded virus?

Many brave people choose sanity. They find their way to a place of clarity and understanding. They respect others.

Let us disregard the media frenzy. Nothing really has changed on this earth. The weirdness is located inside the minds and hearts of most political leaders, the media and their victims.

They have gone completely mad-dog!

In their crazed, rabid stupidity, they attack us with words and then with pharmaceuticals.

Behind the stage sits Mr Global pulling their strings, invading their spirits. Money, power, fear, and greed are the themes of a sick soul.

It’s time for Psalm 23:4, which reveals the heavenly antidote to Mr Global’s schemes.

‘Even though I walk through the valley of the shadow of death,

I will fear no evil, for you are with me:

Your rod and your staff, they comfort me.

You prepare a table before me

In the presence of my enemies.’

That Bible quote sums up the feeling and the situation of this Kiwi gathering. Even more remarkable, there is no organising committee, no central clique, no big leader.

Just volunteers from many of the dozens of community groups. Like mushrooms after rain, right-minded teams of activists spring up to surprise and delight the hopeful patriot.

Then, the crowd moved in a great procession. It moved as one body from the War Memorial Museum in the Domain, through Newmarket, New Zealand’s most up-market shopping strip.

We could see the mighty river of our procession, an impressive pedestrian caravan. Peaceful Kiwis, singing, chanting, chatting, strolling.

We passed along the length of Broadway’s parade of boutiques. We filled Broadway to the brim, as never before. History in the making.

Stepping past the shopping precinct to Mount Eden’s leafy streets, the throng reached its destination.  The Governor General’s stately Victorian mansion sits on Mount Eden’s forested slopes some 1.5 kilometres from the Domain.

Of course, this Governor-General, one Cindy Kiro, whose office has the power to remove the government, has lost her connection with the common people.

She failed to greet us. Failed to welcome the Free Kiwis with a powhiri (Maori greeting). Failed to remove the corrupt government that enshrined here in the Governor Genralship.

Probably Cindy suffers from the same malady that is so evident in all who self-select for political and public positions. Cindy is part of Mr Global’s world.

There were no speeches, no angry or distraught faces. These Kiwis know each other, they represent the heart of this nation. They sense that politics and politicians are downstream from ideology, and that ideology is downstream from inspiration.

And the New Zealand people are inspired. They continue to control the moral high ground. Their behaviour and reality are superior to that of the politicians with souls tainted by globalist tendencies.

The common people can and will beat Mr Global and his minions. Time is on our side – for Mr Global is desperate and making dangerous moves.

His once hidden hatred of humankind is exposed by every child damaged from the vaccine bioweapon, with the ruin of small businesses, with restrictions on our freedom of movement, with the attacks on free speech and disrespect for independent thinking.

How does Mr Global fall from his throne? How does history topple any tyrant?

The old legends and the Bible teach us how to perform this important work. Heroes may be little people, but their virtue, good nature, and determination will defeat the hubris and cruelty of puffed-up despots every time.

So, wise Kiwis know why New Zealand was chosen for filming “The Lord of the Rings”. Because we are the Hobbits.

No self-respecting Hobbit would allow minions of the Witch-King Sauron to inject him with toxic spider juice. Learning on the job, he conducts righteous strife against evil.

Health-loving Hobbits naturally seek the closeness of village life. They are friendly with all other folk who cherish freedom and happiness.

And the indestructible Hobbit’s original pure character will eventually destroy the power of the Ring of Tyranny.

A little Hobbit has the quality of heart and agility of mind to defeat the great Sauron. To turn the witch-king to ashes is his destiny.

Then the Hobbit turns away from war. He returns to the Shire, to cherish his peaceful home, to enjoy family picnics in pleasant glades.