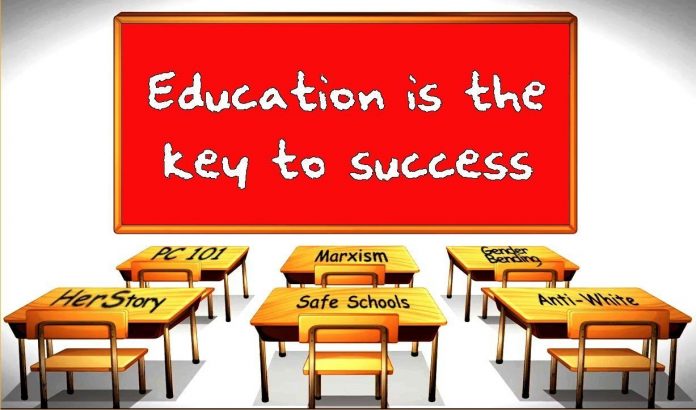 The intention of this series is not to suggest that Australians are stupid or unintelligent. On the contrary, as made evident during the years of Nazi Germany, it is possible to dupe an entire population into believing the most implausible lies and yet relatively few will protest or resist. Even though the threat of punishment and possibly death was cause for fear, the widespread use of the mainstream media (newspapers and radio) was a major influence on the German people’s psyche. History refers to this phenomenon as the lugenpresse or the lying press. Today, we call it fake news. Goebbels fully understood how to ensure the German people would not hinder the Nazi dream:

“The most brilliant propagandist technique will yield no success unless one fundamental principle is borne in mind constantly – it must confine itself to a few points and repeat them over and over”.

The limits of a few short pages do not allow for a comprehensive analysis of what has happened to the education system in Australia (and most of the Western world). The following is a brief overview of one of the principal causes behind the many issues and dilemmas we face today: education and the consequent anaesthetising of the Australian spirit. This essay outlines how a deliberately orchestrated decline in educational standards exemplifies the insidious effects of filling young minds with continual lies.

“The foundation for most public relations businesses is to spin truth into lies and lies into truth with the understanding that it doesn’t matter what’s true, it only matters what people believe is true.” [Captain Paul Watson, co-founder of Greenpeace]

For decades, Australians have watched politicians indulge the self-serving interests of countless educational ‘experts’, lobbyists, unions, and most damaging of all, inadequately qualified careerists. The time, effort, and money that governments have put into ‘improving the quality of education’ have been incalculable. Despite such ‘investment’, little proof exists of a genuine effort to establish a lasting and effective ‘education revolution’, nor is there likely to be.

The reality is that within primary and secondary schools, management and students subject teachers to a relentless barrage of disrespect, subjugation, disempowerment, alienation, confusion, and abuse. This unwarranted harassment is so pervasive that it is a wonder that there are teachers who have retained even a vestige of enthusiasm and motivation to excel at their chosen profession. See: http://www.badapplebullies.com/apps/blog/

Persistent union action often sparked by well-intended criticism or even proposals to change educational practice predictably upholds the deeply entrenched status quo. More often than not, the obstructive behaviours are enacted by a vocal minority many of whom have rarely set foot in a classroom for decades (if at all). Many factors contribute to an attitude of change resistance in schools: candidates for university teaching degrees are accepted with low ATAR scores of 25%, many with poor English language skills; teaching was not the first choice degree due to rejection from entry into preferred courses; and, many teachers are burnt out from stress and work pressures, waiting to retire, or have lost interest in the profession. Another major influence on preventing change is that one in three teachers is a member of the Australian Education Union (AEU). As well as being a staunch supporter and funder of the Labor Party, the AEU’s main affiliate is the ACTU.

How often do we witness the familiar chant for the need to increase resources (particularly funds – think Gonski) based on the claim to sustain or even improve the quality of education, only to see such demands discarded once agreement on a pay rise is secured? To make matters worse, corporate style managerialism has assumed full control over the delivery of education consequently forcing teachers to cope the best they can without adequate support and resources. Pay rises do not equate to ensuring classrooms are properly resourced.

Each time someone in management assumes a position of authority, restructure follows restructure as a means to progress self-motivated ambition for rapid promotion. Another overused managerial ploy to achieve recognition and status is to tout the ‘latest trend in educational practice’ as the pre-eminent model for improving learning even though it is a proven failure in some other country.  Under the guise of raising educational standards and mask the waste of taxpayers’ dollars, Governments impose state and national curricula, standards, and tests, and massage the results to justify the enormous waste of money and time it takes to implement such measures. In reality, success is measured by the number of reports produced, not the quality of learning.

Our universities are anti-intellectual enclaves that proclaim unthinking, mentally homogenised, emotionally inept puppets as their ‘best and brightest’. On most campuses in Australia, leftists are in control within both the student and academic bodies. Ironically, in an environment that declares the pursuit of intellectual freedom as the highest ideal, free speech has become a liability. In a 2017 survey, 8 out of 42 Australian universities have policies that protect intellectual freedom. Thirty-four received a ‘red’ rating for having policies and/or actions that “are hostile to free speech on campus”.

Aggressive students groups and unions actively suppress oppositional ideas using any means possible. This can include charging excessive hire fees and imposing needless security costs on taxpayer funded venues to prevent unwelcome speakers from voicing their views. A large part of the on and off-campus incivility witnessed today is the result of exposing our youth to a university experience.

University education has become a commodity, a ‘product’ to be prepared and delivered at the cheapest cost, and sold to students at the highest possible price. In short, mass-produced courses are for mass audiences. Online delivery in particular, has proven to be an economic boon. Consistent with the corporate model, Universities employ more administrators than staff who actually teach. Widespread casualisation of lecturing staff has simultaneously removed opportunities for graduates to enter into an academic career and diminished the quality of interaction between students and their lecturers. Moreover, there is now a generation of academic staff trained in postmodernist / cultural theories and cultural thinking. They teach subjects framed around Marxist principles. Of the universities that offer undergraduate history, it is difficult to discern the difference as all observe the same ideological framework and teach similar content and topics. There is one other aspect they all share – very few teach Western Civilisation (remember the Ramsay Centre fiasco?).

With the exception of the radicalised socialist left agitators, the majority of students at all levels are silent and display no resistance to authority. Rather than foster creativity and rational thinking, administrators have pressured teachers and lecturers to endure teaching environments where students learn not to think. The Australian education system produces academic ineptitude that ripples throughout every facet of Australian society.

Is it more than coincidental that  the lack of a basic grounding in rational thinking skills among the populace  allows politicians and governments to do as they please?

HAVE THOUSANDS OF LIVES BEEN LOST TO A LONE SRI LANKAN...

DID THE LIBERAL PARTY JUST BECOME THE COMMUNIST PARTY?