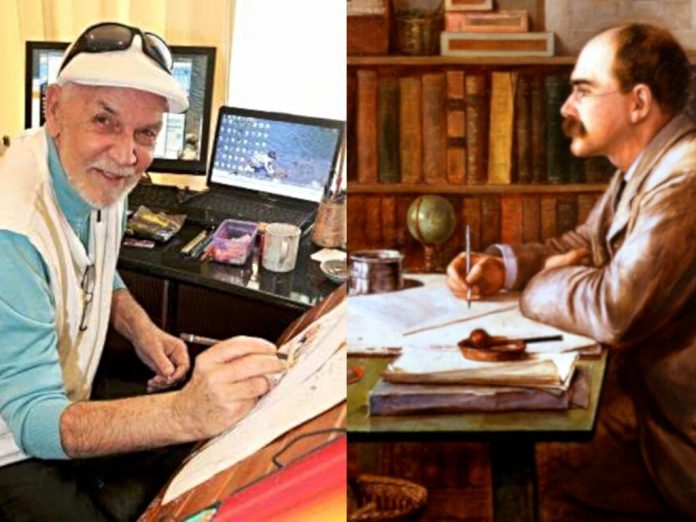 Rudyard Kipling is one of the best known of the late Victorian poets and storytellers. He received the Nobel Prize for literature in 1907.

Yet even with such high honour, many detractors neglected his work shortly after his death due to his unpopular political views. Literary critics however, recognised the power of his work. William Blackburn wrote in Writers for Children:

"His unrelenting craftsmanship, his determination to be 'master of the bricks and mortar of his trade,' compels respect, and his genius as a storyteller, and especially as a teller of stories for children will surely prove stronger than the murky and sordid vicissitudes of politics."

His status as a writer for children is rightfully secure, and none of his major works has yet gone out of print."

One of Kipling’s most famous works is a poem titled “If”. It inspires and provides encouragement on how to live one’s life.

The poem takes the reader through various ways in which to rise above the adversities that life throws in one’s way at some point.

Throughout the poem, the author gives the reader multiple scenarios, both positive and negative, along with a glimpse into how to conduct oneself.

Kipling presents the poem as an if-then scenario and leaves the “then” until the final two lines, revealing to the reader that if they are able to do all that was just mentioned, they will not only have the world at their fingertips, but they will also be a “Man.”

While reading the poem, it will be apparent that it sums up the life and ethos of the man many loved, and affectionately knew as Lazza. I added one word in brackets in the very last line, which I believe more accurately reflects what I came to know about the great Larry Pickering over the past three years.

If you can keep your head when all about you

Are losing theirs and blaming it on you,

If you can trust yourself when all men doubt you,

But make allowance for their doubting too;

If you can wait and not be tired by waiting,

Or being lied about, don’t deal in lies,

Or being hated, don’t give way to hating,

And yet don’t look too good, nor talk too wise:

If you can dream—and not make dreams your master;

If you can think—and not make thoughts your aim;

If you can meet with Triumph and Disaster

And treat those two impostors just the same;

If you can bear to hear the truth you’ve spoken

Twisted by knaves to make a trap for fools,

Or watch the things you gave your life to, broken,

And stoop and build ’em up with worn-out tools:

If you can make one heap of all your winnings

And risk it on one turn of pitch-and-toss,

And lose, and start again at your beginnings

And never breathe a word about your loss;

If you can force your heart and nerve and sinew

To serve your turn long after they are gone,

And so hold on when there is nothing in you

Except the Will which says to them: ‘Hold on!’

If you can talk with crowds and keep your virtue,

Or walk with Kings—nor lose the common touch,

If neither foes nor loving friends can hurt you,

If all men count with you, but none too much;

If you can fill the unforgiving minute

With sixty seconds’ worth of distance run,

Yours is the Earth and everything that’s in it,

And—which is more—you’ll be a (great) Man, my son!

THE END IS NIGH