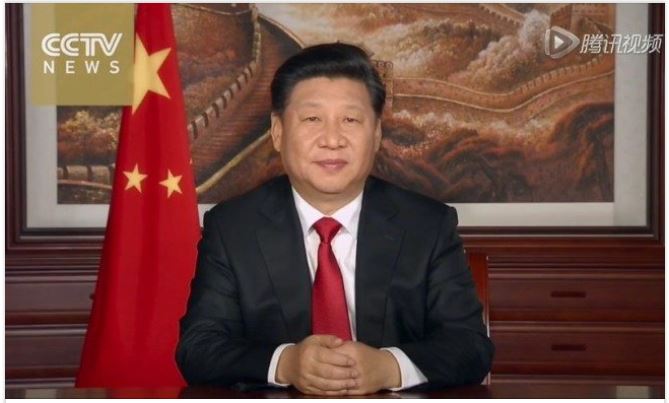 Early this year, the Central Committee of the Chinese Communist Party ordered the destruction of a large Buddhist statue that had been carved into a cliff face in Hebei Province.  The 190-foot-high statue of Guanyin, the goddess of compassion, had attracted up to ten thousand worshipers per day.  The official excuse was that the Chicom regime objected to the commercialization of Buddhism; the reality is that they were jealous of a belief system that doesn’t involve the Chinese Communist Party.  As Mussolini said, “everything within the state, nothing outside the state.”

From a Chinese interlocutor who has escaped the open-air prison that is current-day China:

A couple of years ago I began to suspect that Xi and company are trying to create a new religion in China, yes, a religion in the true sense of the word — an absolute, omnipotent, omnipresent metaphysical Deism.

The new religion didn’t start from nowhere. It started from the Chinese Communist Party’s ever more feverish self-glorification and the personal cult of Xi Jinping.  It’s telling the Chinese people what a wonderful feat is being accomplished to make China the greatest, the most powerful and most envied (or feared) country of the world, all thanks to the wonderful leadership of the CCP and its genius leader Xi Jinping.  China shows the way the rest of the world will follow, and in the long run only China, under the leadership of the CCP, can save the world from any global disaster.

The horrible destruction of Christian and Buddhist symbols throughout China is so bizarre it can only be understood in the context of the attempt to create a religion worshiping the CCP.

The Chicoms are old-style communists in the Stalinist tradition.  The Sino-Soviet split in 1960 was due to Khrushchev’s renunciation of Stalinism.

The destruction of giant Buddhist statues carved into cliff faces — what does that remind us of?  In March 2001, the Taliban blew up 1,500-year-old statues carved in the cliffs of Bamyan, Afghanistan.  The same regime went on to attack the United States six months later.  One thing we have learned from history is that people who blow up giant Buddhist statues are deeply unhappy.

The Central Committee of the Chinese Communist Party have an image as being the cream of a giant meritocracy.  In reality, the princelings of their Long March forbears are as paranoid and delusional as any of the dictatorships the world has seen.

Across the border in Russia, the regime is doing the opposite.  The most respected institution in Russia is the Russian Orthodox Church, so the Putin regime is attempting to borrow some of that legitimacy by building churches.  That has caused trouble because he is trying to do it on the cheap by building some of the churches in public parkland.

We in the West are also having a religious war.  The current state-sanctioned religion is global warming with its priesthood, in the EPA and other agencies, taxpayer-funded.  This religion is under threat from the proposed Presidential Commission on Climate Security, to be led by Dr. Will Happer.  Unfortunately this proposal has gone quiet, and the global warming zealots are declaring “climate emergencies” in one city after another.

As with the Chicom regime, the global warmers are jealous of the established religions they are attempting to replace.  A recent book of the Catholic Church, an institution almost as old as Buddhism, seems to have been inspired by Saul Alinsky’s rule number four: make the enemy live up to its own book of rules.  So the book deplores the fact that an institution that has a lot of homosexuals in its hierarchy does not condone homosexuality.  The homosexual who wrote it did not do so unassisted.  He is quite proud of the fact that his team included 15 lawyers and 80 research assistants.  More resources went into writing that book than likely will be required for the Presidential Commission on Climate Security, if it ever gets started.  So who funded such an exercise?

Individuals in the Catholic Church were also targeted in the same campaign.  Cardinal Pell, ranked no. 3 in the Vatican, was brought down by a multi-year effort to smear him as a pedophile.  This included disparaging profiles in women’s magazines in order to influence what a jury might think.  To the left-wingers in Australia, Cardinal Pell got what he deserved because “he hadquestioned climate change.”  The global warmers don’t like their faith being mocked.

All the leaders of the different Christian denominations that have included global warming in the pantheon of their beliefs really haven’t thought it through.  That religion will eat them from the inside out.

People are still fighting over religion because religion is important.  The former New York Times science reporter Nicholas Wade makes a good case for our genetic code being hardwired to believe in a religion in his book The Faith Instinct.  Religion is part of culture, and culture is the continuation of evolutionary pressures by non-physical means.  Culture interacts with the genome, and a good trend in that interaction can be self-reinforcing — thus Steven Pinker’s theory that the genes for violence were rinsed out of our genome by the Western judicial system.  A society with less violence has fewer frictional losses and becomes more productive.

Back to President Xi and his paranoia of giant stone carvings in remote places.  If he is paranoid of one of those, what would he think of, in Lincoln’s words, “the last, best hope of earth”?  Countries like America threaten the Chinese Communist Party with their mere existence by providing an example of a different way of doing things.  To quote Lincoln again, Xi and his Chicoms might not “by force take a drink from the Ohio,” but these days, PLA generals can blithely threaten to nuke Los Angeles.

Engagement with China failed.  It follows that disengagement will lessen our burden in the struggle underway.  If anyone thinks we can peacefully co-exist with China run by President Xi, think of the Buddhist statue that had such a short life in the cliffs of Hebei Province.