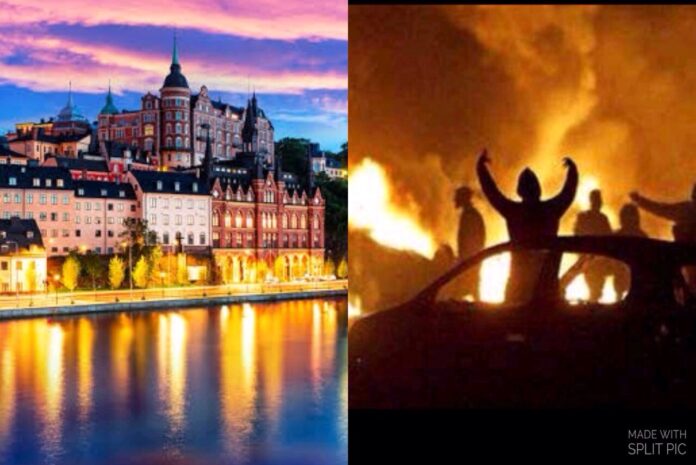 The Danes have put extra resources into controlling the country’s links to Sweden, because of bombs going off in Denmark due to people coming from Sweden. The people from Sweden are Islamist criminals. The Swedish government reacted to the Danish move by calling the Danes “Nazis”. Swedish society has changed for the worse, and the Swedish people are aware of what they have lost.

All this is known, but what is interesting is that a former head of the Swedish truck-maker Scania, a Mr. Leif Ostling, has said Sweden is headed for civil war because of the problem of its violent migrants who have no inclination to integrate into Swedish society. As a successful businessman, his views can’t be dismissed as being from some sort of antisocial loon living in his mother’s basement.

This raises the question: how do you have a civil war in this day and age? Having a civil war is aspirational, but is it achievable?

Who has the guns?

The population of Sweden is now 10.1 million, of which 8% are of the Islamist persuasion. The first question is, who owns the guns, and how many are there?

This site says civilians in Sweden are estimated to hold 2,296,000 guns, legally and illegally, of which about half are rifles. There is a big hunting tradition in Sweden. As of the year 2011, licenced firearms per 100 head of population was 6.5, and registered guns per 100 people was 18.9. So the average gun-owner has three of them.

The Swedish government is thinking along the same lines. They are currently trying to restrict weapons use by hunters. Magazines and ammunition are to be registered with the police and kept apart from the weapons.

The Islamist elements have most of the hand grenades in civilian possession, principally the M75 hand grenade from the former Yugoslavia. Hand grenade attacks in Sweden peaked at 40 in 2016. The Islamists also have more explosives on hand. In the first nine months of 2019, there were 97 explosions in Sweden. Even the BBC has noticed. A litany of horrors could be written about Sweden, with all the murders and rapes and knifings and so on, but just consider that there is an explosion just about every second day.

The defense forces in Sweden have 139,180 firearms, and the police a further 38,000.
All in all, there are plenty of guns to go round to have a civil war with. This won’t be a brutish affair conducted with knives and sticks.

How will it play out?

But how will it play out? At the moment, the Islamists attack police stations, control no-go areas and enclaves, and are not sufficiently discouraged from these activities by the police. Public opinion is becoming less tolerant of the situation. In terms of the politics, leftists won the last election, in September 2018, and the Social Democrats retained control of the government. Their main opposition is the Sweden Democrats, whom the prime minister has called “an extremist and racist party.” In a recent poll, the Social Democrats are at 22% support, and the Sweden Democrats are more popular at 24%.

A sign of the shift in public opinion is the fact that the leader of the Moderate Party, with 70 out of the 349 seats in the Swedish parliament, has apologized on Facebook to all those who had criticized the country’s immigration policies over the years. The shifting winds of public opinion will encourage a crackdown on the Islamist enclaves, which in turn enrages the Islamists, and they are likely to respond with more attacks on the police and other public institutions.

How we get to civil war is that the government reaction to the escalating violence is likely to lag too far behind events and public opinion. And then an officer in the armed forces will have his wife or daughter killed and lead his unit in taking over the parliament building. Nobody in the police force will stop him, because the police have been taking the brunt of the Islamist violence for decades.

The next phase will be the reaction of the lefties running Germany, France, and the European Union. The yellow vests have been protesting in France for over a year now. Early on, they were surprised to see European Union decals on French armored personnel carriers. It seems that Macron and Merkel have conspired to create a French-German force to put down insurrections in Europe. To get to Sweden, this force would have to pass through Denmark, and the Danes are likely to stop them. If that fails, any armored column is unlikely to get across the Oresund Bridge that connects Denmark and Malmö in Sweden. The Swedes make good antitank weapons.

Yes, you can have a civil war in this day and age. With respect to Sweden, what can’t go on forever won’t. If the state does not maintain its monopoly on violence, the state ceases to exist.

People can have a short memory for trials and tribulations when they have been civilized and comfortable for a while. Across the border in Norway, the Norwegians had a bad time in WW2, with near starvation conditions. So in the 1950s, they built grain storage to last them at least a year, in the manner of Joseph’s advice to the Egyptian pharaoh. Two generations later, all the pain had been forgotten, and the grain silos were converted to student accommodations.

The pain of Sweden’s coming civil war won’t be forgotten as quickly.