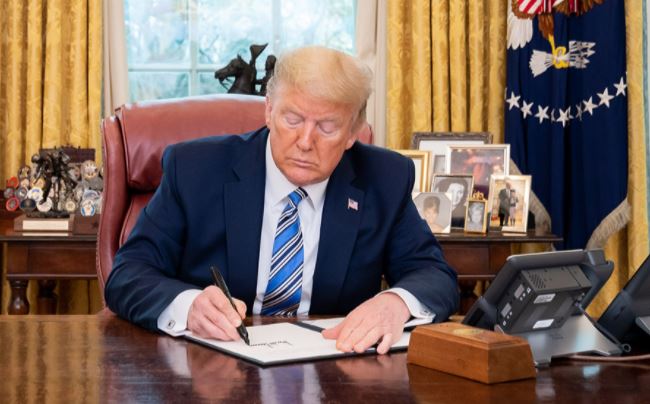 The fate of Western Civilisation, some three thousand years in the making, now hangs by a slender thread.

As Obama said, he had a “pen and a phone” and that was all he needed to remake the United States.

Legal contracts in the United States tend to be mercifully short but there is also wide latitude in legislation in that country which allows new meanings to be construed by activist judges.

Thus Conrad Black was persecuted and his fortune taken from him because he was a conservative in charge of a media empire.

Perhaps we have caught up here because the persecution of Cardinal Pell was a joint private/state enterprise based on loose interpretation of the law.

Section 1 of that Executive Order deals with blocking assets. Section 7 states that no notice has to be given in the blocking of assets under Section 1.

It appears that blocking of assets has the same meaning as seizing of assets. Executive Order 13694 was not rescinded by President Trump and remains in effect. So assets can be seized without notice.

Executive Order 13757 followed on 28th December, 2016. This Executive Order appears to be just one of Obama’s contributions to the Russia hysteria resulting from Hillary Clinton’s loss of the 2016 election.

It names five Russian entities and four individual Russians that were sanctioned. The list is a token effort in that it did not affect business between the Obama regime and Russian entities which they wanted to do business with, i.e. Hunter Biden was able to be paid US$3.5 million by the wife of the mayor of Moscow.

But it does have wording in it that is very useful in our current circumstances. Part (ii) (E) of Section 1 of that Executive Order directs the seizing of assets of any persons:

“tampering with, altering, or causing a misappropriation of information with the purpose or effect of interfering with or undermining election processes or institutions”

Executive Order 13694 had not mentioned elections.

Part (iii) (B), Section 1 directs the seizing of assets of persons who “materially assisted, sponsored, or provided financial, material, or technological support for, or goods or services to or in support of, any activity described” in part (ii). Under Section 1, the Secretary of the Treasury in consultation with the Attorney General and the Secretary of State determines who is complicit for electoral cyber-crimes.

Executive Order 13757 was not rescinded by President Trump, remains in effect and is sufficient to reverse the fraud in the recent presidential election.

A couple of years pass and 91 executive orders later, seemingly unprompted by then contemporary events, Executive Order 13848 was signed by President Trump on 12th September, 2018.

The executive order is entitled ‘Imposing Certain Sanctions in the Event of Foreign Interference in a United States Election’.

As part justification for the executive order, the president quotes the 2017 Intelligence Community Assessment which was a Deep State contribution to the Russia hysteria of the time.

This was released on 6th January, 2017 to delegitimise the incoming Trump administration. Trump quoted the Deep State’s propaganda against them.

“Not later than 45 days after a United State election, the Director of National Intelligence in consultation with the heads of any other appropriate executive departments and agencies shall conduct an assessment of any information indicating that a foreign government, or any person acting as an agent of or on behalf of a foreign government, has acted with the intent or purpose of interfering in that election.”; and

This explains why the Republican Party organised alternate slates of electors for the contested states. The remedy that the report by the Attorney General and the Secretary of Homeland Security are likely to recommend is that on 6th January Vice President Pence recognise the alternate slates when he opens and tallies electoral college votes in order to save the time and expense of new elections in those states.

This is the most likely path. It relies heavily on the Attorney General. The hapless Jeff Sessions was in that role when Executive Order 13848 was signed.

He was replaced on 14th February, 2019 by Bill Barr. Barr seemed reliable but achieved nothing. The reason he slow-walked everything, couldn’t see corruption in the Hunter Biden laptop etc. became apparent when he recently referred to President Trump as a “deposed king ranting”.

Barr outed himself as a Deep State operative too soon, leaves his position on 23rd December and so won’t be involved in drafting the report in response to the report by the Director of National Intelligence. The fate of Western Civilisation hangs on such small matters as the Attorney General breaking cover a tad too early.

This article first appeared in The Wentworth Report