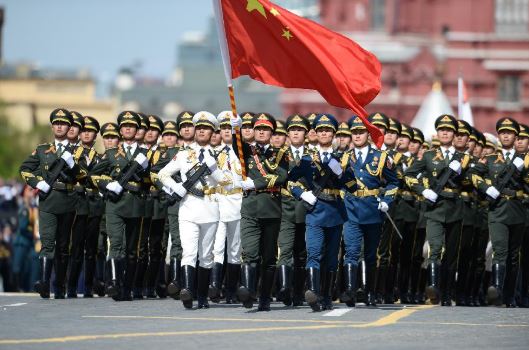 It is commonly accepted now that China is using its trade with the United States and other OECD countries to increase the size of its economy, which in turn will allow it to build its military to the point where it can attack the United States and other countries and hope to win. At its simplest, every Chinese container landed at the Port of Los Angeles contributes to a U.S. combat death at some point in time of China’s choosing. Every item of injection-moulded plastic from China picked off the toy shelves at Walmart contributes to a future U.S. combat death.

Some of our leaders seem to comprehend this but speak in a kind of code. Thus, Vice President Mike Pence told the West Point graduating class last month, “You will lead soldiers in combat. It will happen.” General James Mattis has made similar remarks. How can they be so certain that the size of the U.S. military won’t be enough to discourage a belligerent from disturbing the peace of the world?

National emblem of the People’s Republic of China (source)

Because that belligerent country is China and their intentions are as plain as day. Would a peaceful country continually bait Japan as China does?  This graph from the Japanese Foreign Ministry shows Chinese incursions into Japanese waters.

The sudden leap in incidents in 2012 was due to the rise of Xi Jinping as Supreme Leader, later uprated to Core Leader. All these incursions by Chinese fishing vessels are funded by the Chinese Government; it seems the budget is for 12 per month. This is the steady heartbeat of Chinese hate and enmity while they wait for the moment when they can attack.

All this is known, but still Chinese goods and people enter the country. There is a certain amount of inertia in the system while Trump’s tariffs reach their full effect. But each day’s delay in bringing in those tariffs likely will result in more U.S. combat deaths.

Perhaps a more personal aversion to the Chicoms is needed to speed things up and reduce U.S. combat deaths. What will help to that end is reading this interview of incontrovertible China expert Steven Mosher. Mr. Mosher begins with some interesting economic observations, including that if Hong Kong loses its special trade status with the United States due to the suppression of rights there, then this will be a big hit to the Chinese economy. Tariffs are our best tool in defanging the monster:

The rest of the economy is an old Stalinist state-planned nightmare. The Party itself consumes probably $1 trillion a year in wealth just on its salaries, on its resorts, on its vacations, on its foreign junkets, on the rest.

So the Party itself is a great hurdle or handicap for the Chinese people that they have to carry a cross, carry through life.

The second burden the Chinese people have to bear of course is the state-owned sector which loses trillions of dollars a year. All of the state-owned economic enterprises lose money.

China Railway, for example, is $750 billion in debt. They built beautiful high-speed rail all over China. Not one of those high-speed rail lines is making money. Not one of them is paying back the money it took to construct the rail line, which was probably two or three times what it should have cost because of corruption — officials on the take at every level of government.”

There are some parallels with the leadup to World War II in the Pacific. Roosevelt put an oil embargo on Japan in response to Japanese aggression in China. The Japanese Navy did their sums and calculated they had nine months before they ran out of fuel. So they moved up their war timetable. Mosher’s opinion is that tariffs will cause China to burn through their $3 trillion of foreign exchange reserves very quickly. They are now the world’s largest oil importer. If Xi Jinping thinks his window of opportunity is closing he might move up his war timetable even if the chance of success is much less than what he would prefer it to be. The Germans made the same tradeoff in starting World War I.

And then Mosher tells a tale which reveals the Chinese Communist Party is as repugnant as ISIS was when they were chopping heads of two-year-old girls for being Christians. The Chicom organ harvesting industry started innocently enough back in the 1960s with senior party officials receiving blood transfusions from young people, which does have a life-lengthening effect. Mr Mosher continues the story:

“And then they moved into transplants in the 1980s, and I think it was originally senior Party officials who were the beneficiaries of the transplants. The prisoners who were executed were those who were at that time being given this horrible sentence of immediate execution with a two-year suspended sentence.

And that meant that they were on the chopping block at any given time. And when their tissue was a match to the tissue of a Party leader who was in need of an organ, they would be executed by a single bullet to the back of their head. And they would be, their body would be transported to a medical van and their heart or liver would be extracted immediately.”

Then the Chicoms expanded the operation to make money selling to wealthy transplant tourists from all over the world:

“The Party authorities realized that foreigners were willing to pay $150,000 for a heart, $180,000 for a liver. The price varies. And so they began developing transplant centers throughout the country. I think the People’s Liberation Army were the leaders in this regard because first of all, they had a ready source of prisoners through the police state that they help to run, and they had army hospitals in existence.

So as the traffic ramped up, and more and more transplant tourists began to come to China, the advantage of coming to China was not just the cost, which was lower than the cost of getting an organ overseas. The advantage was that you could get a transplant almost immediately.”

“Now with this extracorporeal membrane oxidation, this heart lung machine, you can harvest all of the organs. And the worst part of it is this: They can actually put a balloon catheter in the carotid arteries going to your brain and block the blood flow to your brain, while they keep the blood flowing to your organs.

So they kill the brain at the same time that they keep blood flowing to the organs and can harvest them one by one. So they’re able to make not just $150,000 off a single killing. Now they can make $750,000 off a killing because they’re harvesting both kidneys, both lungs, the heart, the liver.”

Despite the likes of Governor Ralph Northam of Virginia with his advocacy of infanticide and Planned Parenthood with its trade in fetal tissue, we have better standards than the Chicoms. As Mosher’s interlocutor asks, “why isn’t the CCP just generally considered a pariah regime?”

Well, yes – good question. Their true nature is readily apparent. Let’s not wait until they start killing American troops or drowning American sailors to bestow pariah status. The Chicoms are aggressive, amoral barbarians. Let’s treat them as such which starts with not allowing them into this country for any reason.