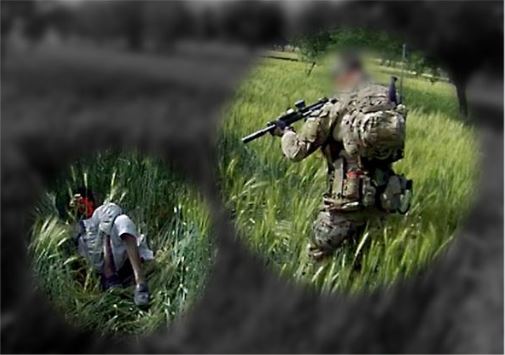 When the ancient Assyrians invaded a country, they would skin the civilians they captured alive and make pyramids out of their skulls to let the people in the next city know what was coming.

During the Mongol conquest of Korea, one town opened its gates and had all its citizens kneel next to the road with their heads bowed so the Mongols would just get on with beheading them. They knew it was unavoidable.

During the bombing of Dresden, 20 per cent of the civilian population was massacred over two nights from the air. Most of them suffocated to death before being burnt.

War is hell. Anyone who likes war is either a psychopath or hasn’t experienced it up close.

However, if you send soldiers to go fight somewhere, you support them. You honour them. You don’t call them criminals and backstab them, as Angry Wine Aunt ABC and the entire political class in Australia is doing this week.

If we are a moral people, then war is a crime. If it is an imperial war of aggression, as all our wars have been now for decades, then it is a sin. There is no righteousness in sending our boys (and girls and now maybe its) to go and kill other people’s boys as part of some macabre oligarchical chess game.

We are told that our wars these last few decades have been to stop ‘terror’. Sure. Maybe they’re for oil. Maybe they’re to contain Russia and China. Maybe they’re part of some other diabolical scheme cooked up by the people who run our foreign policy for their own benefit. Who knows?

The soldiers we send to do the dirty work for our elite though are our best. They’re the cream of the stock. We used to honour such heroic sacrifice. Now, spineless journalists muckrake and smear their reputations and cowardly bureaucrats throw them under the bus.

What tosh. Look at that weasel kowtowing to save his career. How can we expect our soldiers to bleed and die for the nation when their supposed defenders betray them like this?

He’s not the only one.

The Marxists at their ABC are crowing. Don’t they realise that humiliating men who are good with guns is not a wise move for long-term health?

Any sane man would think that the SAS would require a ‘warrior culture’ and a bit of ‘toxic competitiveness’. Isn’t that kind of what the whole special forces thing is about?

If special forces is now about sharing and caring and playing nice, someone needs to tell Spetsnaz.

And given that our incompetent elite are rushing toward a pointless war with China rather than just kicking them out, perhaps we should take a leaf out of their book and start showing our soldiers as heroes rather than villains.

“Peace behind me, war in front of me.” That’s a line from that little recruitment video put out by the PLA.

Sounds like they’ve got a bit of a ‘warrior culture’ problem there too by the looks.

We can’t keep going on like this. We can’t keep sending boys to fight wars for lies and then letting fifth-column Marxist subversives undermine them at home while political elites pander to the identity communists and internationalists.

This has to end.

Those soldiers we sent are not the criminals. They’re not the ones playing power games on the world stage. Someone should pay dearly for the crimes we have committed around the world, but it’s not them. It’s the politicians.

Give the soldiers the parades and the medals and the gold-class healthcare. Send the gutless pollies who play war games on a whim to the gallows instead.

Or even better, drop them off in Kandahar with a rifle and tell them to find their own way home.

DIGGERS DIG THEIR OWN GRAVES