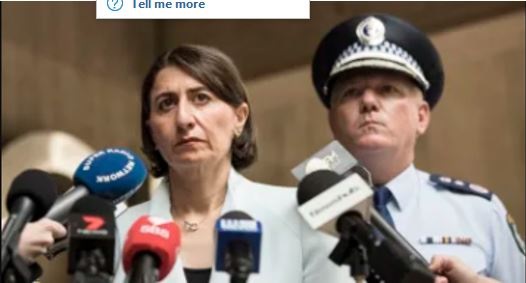 Abandoning centuries of British legal tradition developed to protect individual rights through due process, NSW Police are launching ‘Operation Vest’ to gather anonymous accusations of sexual assault by women against men that the men accused will never be aware of.

Because women never lie, I guess.

It turns out though that this Stasi-style informant system has been running in all states and territories for quite a while. In NSW it’s called SARO, and can be used by police to keep secret files on men without those men having any ability to defend themselves or face their accuser.

This isn’t a harmless process. These accusations matter. Once received, police identify the accused as a sex offender and the secret file can be used later as evidence if another woman comes forward with a formal accusation.

As always, the neo-Marxist media, academic and political elite driving the agenda through have a young female figurehead to make the revolution seem organic and young and funky and fresh.

OK, Greta wasn’t funky or fresh but she was saving the universe so it’s understandable.

This time, the Joan d’Arc for Stasi sex files is some obscure nobody called Chanel Contos.

I’m sure Lenin would’ve gotten more than 4.5K likes with the entire bourgeois propaganda machine behind him. They just don’t make commies like they used to.

I thought that was pretty funny too Vlad.

The communist system established in nations across Eurasia, Africa and South America in various ways after 1917 was not about establishing economic equality. That’s what classroom useful idiots have been telling kids for decades in our schools, and it’s a lie. Communism has nothing to do with equality, or economics, or social justice, or creating the transgender lesbian diversity utopia.

Once the coming Western Marxist revolution has been fully rolled out, and in the United States it looks like the revolution is well underway, the Gretas and Chanels and the Stan Grants and probably even the AOCs who were used as symbols to destroy traditional Western societies will be liquidated. They’re too idealistic. There will be no place for them in the dictatorship of diversity.

You probably think this can’t happen because it hasn’t happened. That’s probably what the kulaks in Tsarist Russia thought too. Then they found out that those angry, smelly intellectuals attacking everything that held society together weren’t messing around.

Mass execution during one of Stalin’s purges

Ukrainian children during the Holodomor in 1933

This is where we end up if we don’t change course. Soon.

The thugs who will run the camps where our children will be put will not be the purple-haired academics screaming outside Parliament House that we believe all women. Those people are fools and tools for the psychopaths who will follow.

But first, those psychopaths need the traditional structures of society so broken down that the people call for their tyranny to restore order. Since the 1960s, campus radicals have worked relentlessly to deconstruct every pillar of our society and create the current social disorder we inhabit.

That was always just a stage, and now that stage is coming to an end. We have the framework for an identity-communist secret police already established now. The wolves are at the door.

If you want to do something about it, start by lobbying politicians. Posting on social media does nothing. The algorithms block your posts anyway once you’re identified as a wrongthinker. Instead, put pressure on your representatives.

If you want to push back against the secret informant system in Australia, contact your relevant State Minister of Police and let them know that secret police processes are unacceptable in Australia and you will be opposing their re-election in future. In NSW, the relevant Minister for Police and Emergency Services is David Elliott. He calls himself a liberal. He’s clearly not. You can find his contact form here: https://www.nsw.gov.au/nsw-government/ministers/minister-for-police-and-emergency-services. Keep it polite but firm.

This is how the Marxists operate. They don’t complain or whine. They flex.

This article first appeared at theantimarxist.info