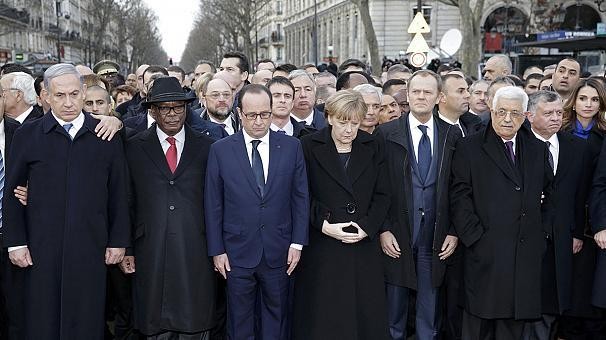 French President Francois Hollande and German Chancellor Angela Merkel are are both fools.

Hollande for his statements: "The first victims of fanaticism and intolerance are Muslims," and "Anti-Muslim acts, like anti-Semitism, should not only be denounced, but be severely punished." Both spoken at the Institute of the Arab World in Paris recently.

Merkel for joining a Muslim community rally after the Paris terrorist attacks to promote tolerance and rebuke a growing anti-Islam movement.

Hollande’s untimely statements so soon after the Paris Islamic terrorist attacks are so offensive to the French people it is surprising that he has not been dragged out of the Presidential Palace and burned at the stake.

It was definitely his “let them eat cake” moment.

These two leaders, like many other Western leaders are foolishly blind to the growing and very dangerous foothold that Islam has gained in their countries and around the globe.

British Prime Minister David Cameron is another pathetically weak Western leader who is a Muslim apologist and constantly cuddles up to them with pro Islam statements.

The UK, like the rest of Europe, is being overrun with Muslims. Enclaves are rapidly growing, springing up everywhere like Chicken Pox. There are virtual no-go zones for non Muslims and where only Sharia Law is practised within. Local laws do not exist. It is just unbelievable that this has been allowed to happen in a Western democracy.

If this tolerance and rampant growth continues Europe will become unrecognisable and eventually will become another Muslim continent.

Tony Abbott who before being elected showed great patriotic promise as a man who would protect Australia and its culture from the scourge of Islam is quickly becoming a major disappointment. He is another pathetically weak leader and falls into the same category as Cameron, Merkel and Hollande.

The same infiltration that is happening in Europe is also well advanced in Australia.

Obamba, well what can you say about him other than that he is the enemy within.
The only leader in the world who is currently standing up to this vile, barbaric, murderous totalitarian cult that is masquerading as a religion is Vladimir Putin.

He does not tolerate Islam. He protects the Russian people and their culture. If Muslims in his country step out of line he crushes them like bugs. No ifs, no buts. I cannot help but admire him and wish we had more leaders like him.

In the past when totalitarian regimes threatened to destroy us our leaders didn’t shy away from the fight. Leaders like Winston Churchill, Franklin Roosevelt, Harry Truman and Sir Robert Menzies.

If we still had leaders like these we wouldn’t have a problem with Islam at all. These leaders were capable, strong, decisive and true patriots. They didn't run around like weaklings appeasing the enemy at every turn with statements like "this has nothing to do with Islam". They called a spade a spade.

They stood up, they fought back and they led the defence of their nations, keeping the world free from our evil enemies who sought to destroy us. They fought back with iron fists to crush them into ground. These leaders saved the world.

These leaders were a far cry from the wimpish Western leadership being displayed today.
Our current crop of leaders will lead us to the destruction of the world as we know it.
History will judge today's leaders harshly for their weakness. They will all be remembered as Neville Chamberlains. The British Prime Minister who famously tried to appease Hitler. We all know how well that appeasement worked out.

Make no bones about it, we are in the fight of our lives. We just haven't realised it yet, therefore we haven't started to fight back.

Islam has been planning to undermine the West for a long time and it's only since 9/11 that their campaign went into the next phase. They have plans to dominate the globe and have slowly and quietly been infiltrating Western nations for decades.

Mosques and schools are springing up everywhere like rampant cases of the clap, all funded by the global Halal certification scam on the world’s food which is run out of Saudi Arabia.

They plan mass immigration from Muslim to Western nations and plan to suck their budget destroying welfare with multiple wives and huge birth rates. Some Muslim families have up to ten children under our generously free heath care systems.

Their plan is to out-breed non Muslims. Eventually they will outnumber us and use an electoral advantage to impose Shariah Law . Then they will be in charge.

Muslims don't all need to be terrorists or extremists. Constant defence of Islam is a gross misrepresentation of the religion to whitewash that it is not compatible with western society.

Wether they are "extremists" or Moderates" they all read from the exact same Koran.

The same Koran that calls upon all Muslims to subjugate, enslave or kill all non believers.

This is a "religion " that worships the prophet Mohammed, a fifty one year old man who had sex with his nine year old wife. In anyone's world or culture this is beyond disgusting, yet Muslims blindly carry on being Muslims like there is nothing wrong.

This is the so-called religion of peace.

The Western World needs to wake up and wake up now before it’s too late.
We need to cease the politically correct muzzling of our societies.
We need to all speak freely, realise and admit that Islam is evil – all of Islam.
We need to stop tolerating them living amongst us.
We owe it to our children and grand children not to leave them to the mercy of Islam because Islam will show them no mercy.

We need to stop this evil in its tracks and send them all back to throwing rocks at each other in the desert.

If we don’t do all of this very soon we are doomed.

Where are the strong men and women who we desperately need as our leaders today to ensure our survival?