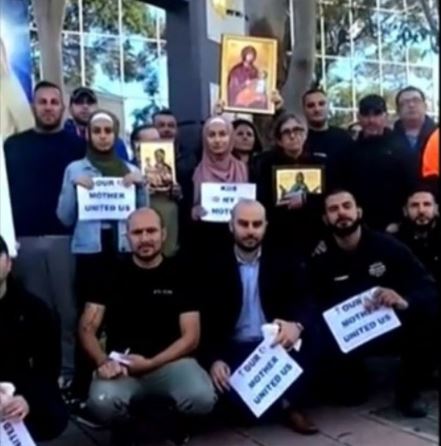 People’s heads have exploded this week as fat degenerate KIIS FM radio host Kyle Sandilands has actually been forced to apologise for blaspheming against the Virgin Mary.

Kyle Sandilands issued a lengthy on-air apology on radio this morning for the “dumb” comments he made about the Virgin Mary but made it clear he won’t be getting sacked anytime soon.

The KIIS host sparked outrage just over a week ago when he “joked” on his breakfast show that the Virgin Mary was probably impregnated “behind the camel shed”.

“I thought Mary was his (Jesus’) girlfriend but apparently it was the mother,” he said.

“And the mother lied obviously and told everyone, ‘Nah I got pregnant by a magical ghost’. Bulls**t.”

He also called anyone who believed in the Bible story “dumb”.

“You might believe everything that was written down 2000 years ago to be absolutely accurate. Good on you, you’re dumb. Dumb as dog sh*t,” he said.

Kyle and Jackie O weren’t on air last week due to the radio survey break, but the controversial radio host addressed the issue at the start of this morning’s show.

Kyle claimed that someone published his mobile phone number online after his Virgin Mary comments and he received hundreds of angry calls.

“Some were very, very aggressive, a lot of people hung up … there were threats,” he said. “But the main thing I took out of it was, you know me, I believe everyone has the right to their own opinion and their own religious beliefs and no one has the right to take that away from them. But what I didn’t realise until I started taking these calls was that I’d stepped on the belief of other people and that’s what I’d done wrong.

This is a remarkable turn of events, isn’t it? Can you even remember the last time somebody apologised for insulting Christians in the West?

Kyle’s blabberings were obviously influenced by decades of Satanism dressed up as Western culture, exemplified by movies such as The Last Temptation of Christ and the body of work which Dan Brown and his wife borrowed to create The Da Vinci Code.

These works and their ilk drew on the heretical belief that Jesus married the prostitute Mary Magdalene and fathered a European royal bloodline.

This conspiracy theory has filtered its way down, in a manner described by Miranda Priestly, from ‘high culture’ to the bottom feeder that is Kyle Sandilands. His assertion that he thought Mary was Jesus’ girlfriend finds its genesis in these previous blasphemous works.

Why then, has Sandilands been forced to apologise for his words, while these subversive works, while controversial have been maintained as pivotal moments in 20th Century Western culture?

This is why we have to talk about race:

The comments prompted people to protest out the front of the KIIS FM radio station last week in Sydney and were condemned by religious leaders around Australia.

Look at who was protesting. A combination of Lebanese Muslims and Lebanese Christians.

Who were these “religious leaders around Australia”? Were they the heads of the Catholic, Anglican, Lutheran, Methodist, and hell, even the Uniting Churches in Australia’s main capitals? Tell ’em they’re dreamin’:

From the Daily Telegraph:

Senior Christian and Muslim leaders have dismissed an apology by Kyle Sandilands over derogatory comments he made about the Virgin Mary and are instead calling on him to meet with them in person.

“Many leaders of the Christian and Muslim faiths raised their concerns about these comments and declared their dismay and opposition to Sandilands’ mockery of religion, beliefs, and of those who hold those beliefs,” the statement read.

Not a Saxon to be seen.

If ever there was a signal that British heritage Australian Christians need to break the ZOG mind control and get redpilled on race, this is it.  If we leave it to foreigners to defend our culture and our honour, then Christianity and Western culture will merely become additional vehicles for white genocide.

The appearance of non-Australian Christians outside the KIIS FM studio obviously caused Kyle and his bosses to step back for a moment.

It triggers the NPC cognitive dissonance when Christianity is suddenly defended by a Certified Marginalised Community (TM). Whose side do we choose? This does not compute. But it was the appearance of Muslims that forced the apology out of Kyle’s pie hole.

It doesn’t matter to Kyle that Muslims venerate the Virgin Mary for a heretical reason – Islam teaches that Jesus was merely a great prophet, not the Son of God. The irony here is that in attacking the Virgin Birth, you deny the divinity of Jesus, (which Muslims also deny) and thus the whole point of Christianity, which is that God sent his Son Jesus to die on the cross in order to save us from sin.

What matters to Kyle? Let’s leave the explanation to Generel Moff Tarkin:

Just to reinforce the point, let’s listen to Han Solo:

“Fear will keep the local systems in line.”

“Islam has nothing to do with terrorism.”

We are now at the point in the West where Muslims don’t really need to commit any more large scale terrorist attacks.

Their free flow here is assured, and their birth rates are solid. The state security apparatus is being systematically turned against the host population and mass media propaganda feeds us a steady stream of humiliation, informing us that our soon to be overlords are both victims but also superior to us.

Muslims understand their own history too. Islamic conquest and Islamisation wasn’t a story of non-stop violence.

The violence was inflicted when necessary. The rest of the time the mere threat of violence over the course of 1400 years has been enough to turn the former heart of Christendom into 90+% Islamic shitholes.

Basically, in the current year Australia, Muslims know that all they have to do is show up and they get what they want.

Kyle Sandilands gets it. He doesn’t want to live his life like Geert Wilders, Ayaan Hirsi Ali or Salman Rushdie.

Antifa sympathiser little Joe Hildebrand doesn’t get it. His head is still exploding.

Just saw @ABCmediawatch and very confused by them condemning Kyle Sandilands for making a joke about Christianity. Do they support free speech or blasphemy laws? As a Catholic libertarian I am very disappointed and I wish them all the best.29210:14 PM – Oct 1, 2019Twitter Ads info and privacy91 people are talking about this

As Adam Piggott has pointed out, the left’s past championing of free speech was only ever a way of subverting blasphemy laws in order to subvert the Christian West.

When an establishment journalist gets raided for breaking the law or somebody insults Christianity, leftists will still reflexively revert to their old habit, but generally they are in favour of speech suppression now that they currently hold cultural and political hegemony.

But as this episode demonstrates, all this will change. Australia is not Australia. The West is not the West. The foreign invaders the globalist oligarchy brought in to replace us are changing the rules and will soon battle for cultural supremacy. They represent a genuine challenge for one reason and one reason alone:

Muslims are willing to resort to violence.

Ironically, Kyle Sandilands’ capitulation and apology for insulting the Virgin Mary is a sign of the growing Islamisation of Australia.

It is also a reward for political violence.

I’ll let you draw the dots about what conclusions our own people will draw from this.