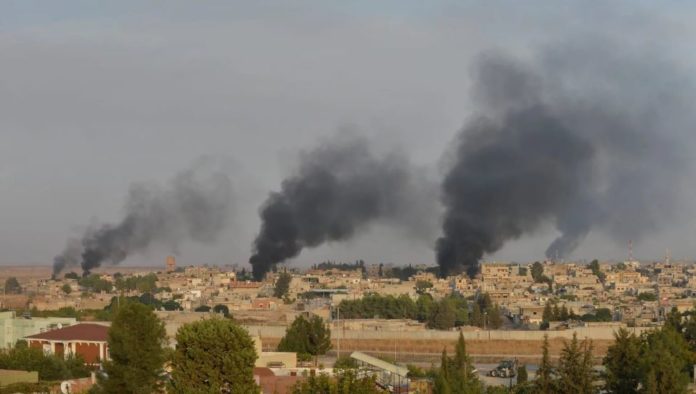 This article is reproduced with kind permission of the good people at XYZ Blog. It can be viewed in its original form HERE

Back in the 80’s, Saddam Hussein gassed the Kurds (apparently) and we all felt sorry for them. Then during Iraq War 1 George HW Bush said something vaguely resembling a call to arms.

The Kurds responded by rebelling against Saddam, then they got massacred when it became clear the US was only interested in liberating Kuwait and hadn’t come to let-my-people-go.

Hollywood conveniently made a movie about it, and our sense of responsibility regarding abandonment of the Kurds was one of the canards, among others, that sucked us back in.

After Saddam was toppled and when ISIS became the new bad boys in the sandpit, the Kurds proved themselves imperfect allies. Here is Lucas Rosas on the subject:

“Imagine a cross between a gang of Marx-spouting Communist fruitcakes and a fractious alliance of Muslim mafia clans all eager to stab each other in the back, armed with tens of thousands of Kalashnikovs and the very latest in heavy American military equipment….

“…during World War 1 the Turks wanted to religiously cleanse their empires’ heartland of filthy Armenian and Assyrian Christians, but they had a problem.

The pesky war was taking up all their military resources that could otherwise have been usefully directed towards genocide. The solution? Promise the Kurds the property of anyone the Kurds ethnically cleansed.

“And that’s why the rebels in northern Syria today are Kurdish Muslims rather than Middle Eastern Christians. The Kurds are sometimes literally living in what were once the Christians’ houses.

The Turks later turned on the Kurds, insisting they were actually “Hill Turks” and tried to wipe out their language, culture and identity, but to be honest I find it hard to feel sorry for them….

“It took the U.S months of bribes and cajoling to get the Kurds to strike south and take the relatively undefended ISIS-held oilfields before the rapidly advancing elite Tiger forces of the Syrian Government could retake them.

The hundreds of trucks full of “supplies” to help “motivate” them were crossing the Turkish border ten at a time for a month. Generally speaking the Kurds don’t really see any reason to fight in areas that aren’t at least a little Kurdish, so they needed persuading.”

A pattern exists whereby the Kurds have become part pretext, part shiralee, a reason for Western forces to be perennially trapped in the shithole that is the Middle East.

Imagine that, a stateless people of the Middle East, desperate for a homeland, always in need of Western protection, ironically one of the many thorns in the side of that mythical Middle East stability.

Anyway, until recently the Kurds had been used as a pretext again by neocons to keep a small US force on the border between Turkey and Syria, ostensibly to protect the Kurds living in the region and to ensure the Kurds would guard tens of thousands of ISIS leftovers who we’re not allowed to massacre because human rights or something.

In reality, the boys were there as a tripwire in the hope that the neocons could finally get their little war with Iran.

Until the God Emperor wisely pulled his American boys back. Now the Kurds are getting hammered and we are supposed to care again.

The ground assault was launched in the border town of Tal Abad, with Turkish media reporting special forces and armoured vehicles had entered Syria at several points along the border.

A source from the Serekanyie Military Council told the North Press Agency the Turkish army had targeted 16 points with air strikes and heavy artillery shelling, in the villages of Aluk, Nustel, Aziziya, Aziziya school, Bir Nouh, Asadiya, Musharrafa and silos in Ras al-Ain.

I don’t know where any of those places are, and I don’t care. I also don’t care about the Islamic State:

The strikes also hit one of the several Kurdish camps near the border where Islamic State prisoners are being held.

Coalition countries have grave concerns the Kurds will now abandon the internment camps, including the infamous 70,000 strong Al-Hawl camp where 66 Australian women and children are housed, in order to fight back against Turkey.

You know, there is always a way to deal with that.. Also, they’re not Australians. We were supposed to be fighting the terrorists over there so we didn’t have to fight them over here.

Then our treacherous governments imported millions of them into the West and they have been relentlessly bombing our women and children in our own backyard for the last decade and a half.

“There are attacks on guards and camp management, in addition to burning tents and preparing explosive devices,” said Mr Kro, speaking from the town of Qamishli.

The XYZ has obtained exclusive footage of the hell being unleashed in said internment camp:

Basically, the S has hit the F in northern Syria. Greg Sheridan has produced his usual sound analysis, summing up the Turks’ motivations, Trump’s motivations and Australia’s well balanced response.

He has made a bit of a fuss about America’s ability to exert influence in the region and the importance of not betraying allies.

It’s the sort of thing which would have made a lot of sense before the demographic transformation of the West really kicked into gear but is now essentially beside the point, for that very reason.

Aside from the fact that it is important for people to understand that the world is a chaotic and murderous place with or without Western intervention, I am extremely pleased that Donald Trump has taken this course of action, for the following reason:

Given that Western nations are no longer nations, the concept of “the national interest” has become redundant.

When Western governments are actively importing millions of third worlders every year, when European people are reproducing at below replacement levels, and when our governments are actively suppressing any discussion of this demographic replacement, how can the ethnic cleansing of Kurds along Turkey’s southern border be said to affect the so-called “strategic interests” of you or I?

Turkey is a thoroughly illegitimate country which came into existence after centuries of relentless assaults against the heart of the Eastern Roman Empire, and became more or less Turkish after centuries more of ethnic cleansing and genocide.

It now threatens to unleash a fresh invasion wave of economic migrants upon the West if we criticise its planned forced repatriation of said Syrian refugees into the buffer zone it is creating.

How can Australia be said to have a “national interest” when our government has foolishly imported Turks, Syrians and Kurds into our country and the major political parties must now satisfy each constituency?

It simply makes no sense. The US needs its troops to guard its own border, not somebody else’s.

More to the point, the civil wars, ethnic conflict and foreign invasions which will come to Western countries in the next couple of decades (not the “climate emergency” which the NPC’s are currently obsessed over) are going to make the world wars of the 20th century look like Mary Poppins.

After that, the only wars we should ever consider in the Middle East are wars of total conquest to take back the land which is rightfully ours due to the might of our Roman and Gothic ancestors.

Sorry Kurds , but you’re on your own this time .