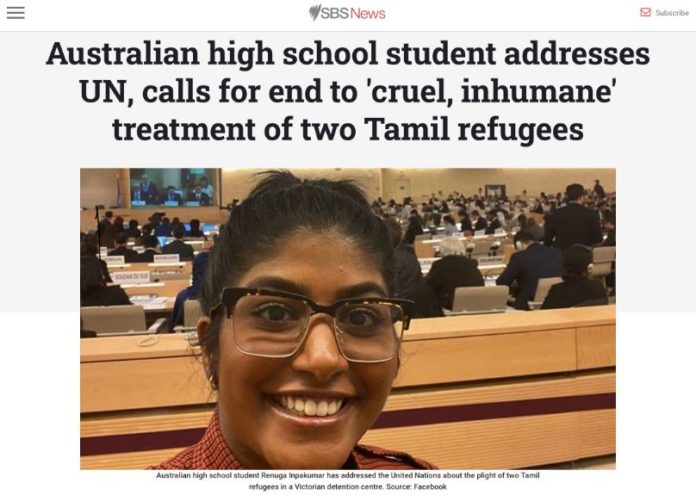 A Sydney high school student has used her opportunity to speak at the United Nations as a platform to make the case for two Tamil refugees being held in a Melbourne detention centre.

Renuga Inpakumar, from Our Lady of Mercy College Parramatta in Sydney’s west, travelled to Geneva, Switzerland to address the 43rd session of the UN Human Rights Council.

The 17-year-old refugee activist took aim at the Australian government, accusing officials of failing to honour its obligations to those in need.

“The continued detention of individuals who have been the subject of persecution during the Sri Lankan genocidal war against Tamils and clear intent to seek refugee and protection in Australia shares no spirit of brotherhood,” Ms Inpakumar said.

“In fact, it breaches the spirit of brotherhood and other obligations owed by Australia to the international community and the two refugees (in question).”

This Tamil student has learned our trigger words. Say brotherhood and we’ll let in anybody to the strains of Beethoven’s 9th.

Ms Inpakumar is a passionate advocate for the two men, Sivaguru Navanthirasa and Loganathan Janurupan, whom she says have languished in “various Australian detention centres for more than 10 years.”

In casting a critical eye on Australia’s immigration policies, the year 12 student urged the United Nations to assess the situation and intervene as necessary.

“Is the treatment of these refugees just in accordance with the (UN) charter’s vision? if not, I implore you to act on this matter urgently,” Ms Inpakumar said.

Because – you get the picture.

I actually have no problem with Renuga Inpakumar representing the interests of her people. It is a perfectly natural and good thing to advocate for the benefit of your ethnicity.

She is able to advocate for the ethnic interests of her people in the world’s peak globalist body because Australia is ruled by a cabal of anti-whites who give the Australian people the illusion of democracy while denying us a say on who comes into this country and just who is considered Australian.

This cabal, who sit on both sides of the Australian parliament, reinforce the fantasy that Renuga Inpakumar is an Australian because they either believe in the genocidal notion of so-called “multiculturalism” or they are too cowardly to oppose it publicly.

Thus a Tamil who should never have been let into the country without democratic consent, can masquerade as an Australian at the UN in order to pressure the Australian government to let in more of her people.

Every other non-Australian ethnicity which has come here since the end of the Second World War has done pretty much exactly the same thing. And both sides of politics have let them do it for 75 years.

Don’t expect an ethnic Australian nationalist to be allowed to address the UN to urge the body to pressure the Australian government to stop replacing us in our own country. We’re going to have to get out of this one on our own.

Republished with kind permission of David Hiscox at XYZ