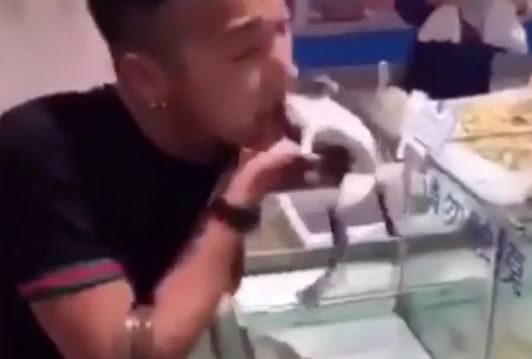 ScoMo hilariously stated last Wednesday that anybody who thought there would be a nationwide lockdown had tinfoil for brains.

While declaring a national human biosecurity emergency under the Biosecurity Act on Tuesday morning, Morrison ruled out an Italian-style national lockdown and urged calm, taking aim at those panic buying, saying it was “un-Australian” and unnecessary.

On The Uncuckables the following evening, Tim Wilms disagreed with my statement that a nationwide lockdown would occur given how adamant Scott Morrison was in his denial. I predicted they would follow the pattern set by other Western nations:

Morrison said this was only stage one of the social distancing measures. If Australians fail to adhere to the rules, more draconian measures will be introduced. Stage two has not yet been defined or discussed.

States and Territories implement their own restrictions

Tens of thousands of people flocked to Bondi Beach on Friday, drawing criticism from community leaders and health experts. Health authorities have identified outbreaks in Bondi and Darlinghurst, both on March 15, at local bars and clubs. “What happened at Bondi Beach was not OK and served as a message to federal and state leaders that too many Australians are not taking these issues seriously enough,” the Prime Minister said on Sunday.

Despite repeated warnings about the risks of spreading COVID-19 — and the closure of Bondi, Tamarama, Bronte, Coogee and Maroubra beaches by local councils — hundreds made their way into the water or onto the sand, again on Sunday, with some ducking under fencing or other barricades to reach the sand.

NSW Police Minister David ­Elliott called the beachgoers “stupid” and said any person on a closed beach would be moved on.

Morrison said more draconian measures needed to be pursued because the behaviour of the public over the weekend “sent a very clear message to premiers, chief ministers and myself that the social distancing practices are not being observed as well as they should be”.

Morrison said he was “deeply regretful that those workers and those business owners who will be impacted by this decision will suffer the economic hardship that undoubtably they will now have to face. That is a very, very regretful decision. But a necessary one in the view of the premiers and chief ministers and myself to ensure that we can control the spread of this virus.”

I don’t any special ability to predict the future. I simply observe patterns.

A rapidly spreading global pandemic didn’t stop Parisians from crowding public parks and pathways on the first, warm sunny weekend of the year — and then posting the evidence on Twitter and Instagram. The French government was watching.

“We’ve also seen people getting together in parks, in bars that haven’t respected the order to close, as if somehow life hadn’t changed,” French President Emmanuel Macron said in a televised address Monday evening, when he announced a countrywide lockdown on top of the government’s earlier efforts to close restaurants and cafes. “It’s not just you that you aren’t protecting — recent developments have shown that no one is invulnerable, not even the youngest of us.”

The police could use emergency powers to enforce rules on social distancing and reduce the further spread of coronavirus, the London mayor has said, amid concerns about mixed messages from central government on the issue.

Following scenes of packed beaches and parks over the weekend, and worries that people fleeing cities for more remote parts of the UK could overwhelm less well-resourced local health services, Sadiq Khan urged people to stay at home if at all possible.

“My message to all your viewers is simple: life has changed, we’ve got to do things differently for a while now,” he told the BBC’s Andrew Marr Show. “Social interaction leads to the disease spreading, leads to people dying. Don’t leave your home unless you really, really have to”….

“It’s really important that the police are focused on the priorities that they’ve got, dealing with violent crime and other issues, but clearly, if it is the case that people continue to act in a way that’s leading to this disease spreading, then those sorts of things will have to be considered.”

It’s like a memo went out to all Western governments. It’s not extreme far right extremists on the internet noticing this either.

Based on the advice of its team of epidemiologists, behavioural scientists and virologists, the UK government is leaving it down to citizens to choose how closely they stick to its health advice, for now at least. One reason for that is the tricky behavioural science behind getting people to stay indoors for long periods of time.

“One thing that’s necessary for people to really support any kind of intervention is for it to be seen to be proportionate to the threat,” says Susan Michie, a professor of health psychology at University College London who is also a member of the scientific group advising the government’s response to Covid-19. Put in place a lockdown too early, and people may not be able to comply with it but go too late and you risk negating some of the possible public health benefits that come with wide social isolation.

This might explain the government’s slow policy of gradually introducing new advice and policies to deal with the outbreak. “If you look retrospectively, that has been a coherent strategy – they’ve been ratcheting up, bit-by-bit,” says Michie. What started with advice on hand-washing and calling 111 continued with isolation for those with symptoms and later social distancing for the entire population.

So I’m not crazy. They even provided a handy photo of sheep for us, just in case we didn’t really understand what was going on:

It’s bizarre, isn’t it? In contrast to the Chinese government which locked down cities cold turkey, Western leaders appear to think they need to condition us to accept a lockdown and to socially enforce it on one another with hashtags.

It’s working. The general consensus of the conversation I have with people I know is that we should already be in total lockdown.

The same politicians who barely a month ago were urging us to eat at Chinese restaurants and hug Chinese people in order to not be racist are now berating us for lying in the sun.

Now their people, who brought the coronavirus to our country with the treacherous support of our own institutions, send our products back to their countries.

It’s almost like our governments have been betraying us for years and understand that they are at risk of losing all legitimacy. Thus at our darkest hour, they want us to beg for our own enslavement.

SODOMY, ISLAM, OBAMA AND THE MYTH OF ‘PALESTINE’