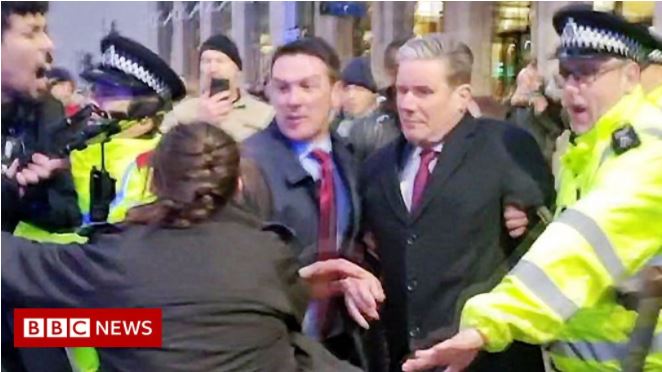 However, I assumed that by 2022 the police’s role would merely be to escort Western politicians to the gallows and prevent them from being dismembered by angry mobs along the way.

British Labour leader Keir Starmer was ushered into a police vehicle in London on Monday, February 7, after protesters surrounded him and shouted references to alleged child abuser Jimmy Savile.

Last week, Prime Minster Boris Johnson criticized Starmer in Parliament for what he called a failure to prosecute Jimmy Savile during his time as director of public prosecutions. A widely known TV personality during his lifetime, Savile has faced a raft of sexual abuse claims. Johnson was condemned for the remark, which prompted the resignation of his policy chief.

This footage, recorded near Parliament on Monday, shows Starmer being escorted into a police car and driven away, as a mob of protesters shout at him. Footage recorded on the street captured members of the crowd accusing Starmer of “protecting pedophiles” and making reference to Savile.

According to Metropolitan Police, two people were arrested at the scene.

As the knowing grows despite the best efforts of the censors, otherwise known as the Lying Press, the emerging pattern is that it is no longer safe for Western political leaders to show their faces in public. In Australia, Prime Minister Scott Morrison and Victorian Premier Daniel Andrews have both been mobbed in recent times:

And Canadian Prime Minister Justine Trudeau has gone into hiding under the pretext of isolating with Covid:

Ordinary people are furious that after two years of lockdowns and the overturning of every aspect of our lives, people are being forced to choose between taking a dangerous vaccine to keep their jobs or living on the streets.

As stated, the normies are connecting the dots. Pizzagate is real. Consider the fact that Jeffrey Epstein and Ghislaine Maxwell ran a sexual blackmail operation for Israel which ensnared practically every powerbroker on the planet, yet the only member of the establishment likely to face punishment is Prince Andrew.

The Lying Press is pretending that this is completely normal and that once the sacrificial lamb is slaughtered the matter will be done and dusted.

Hence the cries of “traitor” at Starmer.

Klaus Schwab, the head of the World Economic Forum, has openly boasted that his organisation has “penetrated” the cabinets of the most pivotal countries in the world, so that they will do his bidding rather than fulfil the mandate bestowed upon them by their constituents:

This footage has surfaced at the same time as footage of Scott Morrison being congratulated by the WEF for fulfilling their policy program, rather than the policies he promised to the Australian people.

It is telling then, that an activist who has called for Morrison’s hanging has been invited into federal parliament barely a week after his own car was mobbed by anti-vaccine mandate protesters.