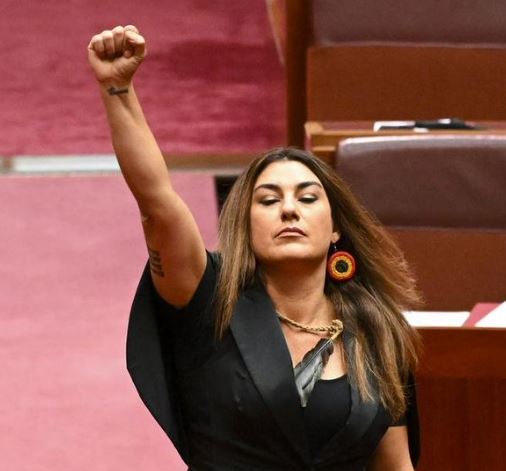 There is no mockery I can write here which hasn’t already been said on the internet.

Greens Senator Lidia Thorpe has been forced to undertake her parliamentary oath for a second time after referring to the Queen as a “coloniser”.

The outspoken Senator for Victoria lifted her fist into the air in what appeared to be a black power salute as she marched towards the central table of the chamber on Monday morning.

“Appeared to be”? “Appeared”? Yes, that was a black power salute. Lidia Thorpe did the salute of a terrorist organisation in our parliament. It’s another “Australia has fallen” moment.

She then sarcastically recited the oath of allegiance and added her own spin, which was swiftly shut down by other senators.

“I sovereign, Lidia Thorpe, do solemnly and sincerely affirm and declare that I will be faithful, and I bear true allegiance to the colonising Her Majesty Queen Elizabeth II,” she said, drawing uproar from the Senate.

Her schoolgirl antics made international headlines. She lapped it up:

Lidia Thorpe has openly admitted that she considers herself aborigine, she (correctly) considers aborigines to be a separate people from Australians, and that she is not so much a traitor as an infiltrator on behalf of “her people”:

The irony, as her designer clothes attest, is that as a university educated, slightly aboriginal federal Senator who can get away with making a terrorist salute in the heart of Australian power, it is she who holds the whip and it is the native Anglo Australians she mocks who are now well and truly the niggers. We are a literal minority.

The Australian parliament does not represent Anglo Saxon Celtic Australians. Nearly every elected official in the land proudly boasts their commitment to multiculturalism and supports mass immigration.

Anybody who openly represents White Australians is blood libelled by the entire political and media establishment as a terrorist.

Political aboriginals like to declare themselves “the sovereign owners of this country”, and claim that they “have never ceded sovereignty”:

THE FEDERAL RESERVE SHUT DOWN YESTERDAY—WHY?