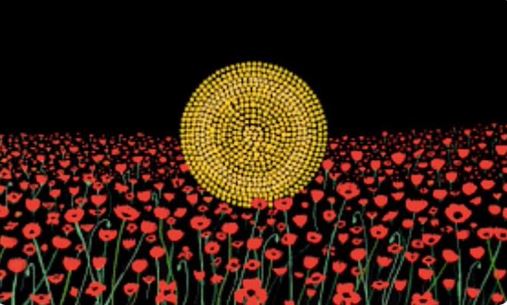 Given that Lidia Thorpe is under investigation for potential links to organised crime, you’d think she would want to keep her head down:

On Remembrance Day, Lidia Thorpe tweeted a variation of the so-called “aboriginal flag” depicting the red portion as poppies, accompanied by the words:

“Let us remember those who never made it home, care for those who did and tell the truth about our history so we can heal. My ancestors fought in the Frontier Wars, my great grandfather Harry Thorpe earned a medal for bravery in WW1. Lest we forget.”

It is eerily similar to the tweet by Yassmin Abdel Magied on Remembrance Day in 2017 which sparked national outrage.

The cultural pushback against Yassmin was so strong 5 years ago that she basically fled the country with her tail between her legs. This time around, Lidia Thorpe’s disgusting tweet got nothing. The only reference a Google search gives us is a glowing review from an obscure aboriginal blog.

Today is Remembrance Day, and Greens Senator Lidia Thorpe has recognised those who fought in Australia’s Frontier Wars, including her ancestors.

The Frontier Wars between First Nations people and colonisers took place following the 1778 invasion of Australia.

Senator Thorpe also paid tribute to her grandfather Harry Thorpe who won a medal for bravery in World War One.

She wrote on Twitter: “Let us remember those who never made it home, care for those who did and tell the truth about our history so we can heal.”

This week, the Australian War Memorial revealed it had allocated between $5 and $10 million dollars for a new gallery recognising the Frontier Wars, expected to open in 2028.

Between 5-10 million dollars “recognising” the so-called “frontier wars” at the Australian War Memorial?

This makes no sense. Aboriginal identity politics activists have gone to extraordinary lengths to distinguish aboriginal people from Anglo Australia as a separate people. They have their own flag, their own customs, culture, bloodlines and lore, their own reservations where White people are not allowed to go without a permit, and they are advocating for an entire House of Parliament to advance their ethnic interests alone.

Surely if they want to commemorate their own “war dead”, they should do so at their own war memorial and leave ours out of it. They would undoubtedly be given the money if they demanded it.

The doublethink is deliberate. While aboriginal people are a separate people and must commemorate their “frontier wars” fallen, however the Australian War Memorial must acknowledge them because it has to embrace the diverse history of “all Australians” or something.

What it comes down to is that White people are not allowed to have anything of our own.

Not even our own grave.

You’re probably wondering, “what the bloody hell are the “frontier wars”?” They are essentially the latest chapter in the fictionalisation of Australia’s history in order to demoralise and disenfranchise White Australians.

The so-called “frontier wars” refer to the occasional violent skirmishes between British settlers and aborigines during the colonial period. If a White man killed an aborigine without due cause he would by law be hanged. However aboriginal gangs would regularly loot, rape and murder British settlers, which was rightly met with proportionate responses from British settlers.

Keith Windschuttle has conducted excellent research debunking the myths of massacres and genocide by White British settlers against aboriginals. Quadrant has continued its excellent coverage, explaining what a disgrace it is to associate the Australian War Memorial with the so-called “frontier wars”:

“Let me set Karvelas straight on one point.  The primary purpose of the Memorial is not ‘telling stories of war’.  It is to honour those thousands of men and women who have given their lives in defence of this country and its values. The story telling derives from that aim. I did not lose my life but, as a veteran, this proposal offends me mightily.  I can only imagine the outrage of those who did die, were they able express it, at the suggestion that myths (and that is all they are) about colonial wars designed to denigrate the very foundations of the nation they cherished, be incorporated into the Memorial.”

Here we get to the heart of the matter. Any mainstream reference to our brave and resourceful colonial ancestors in the current year clownworld is framed in terms of genocide and injustice by White people against aborigines.

This blood libel is now bleeding over into our commemoration of our own war dead. They used to let us remember our fallen, but now they are attacking our heritage from every angle.

The logic will inevitably follow that if our country was founded upon theft and genocide, then that is what our Anzacs fought for. The revisionists are deliberately pulling the moral rug from under the Anzacs. The academic establishment is working to delegitimise Australia by delegitimising its founding. If they can do this, they can delegitimise the Anzacs on the grounds that they fought for a racist, genocidal regime.

By extension, this delegitimises us, White, Anglo Australians. It is designed to demoralise us to the point where we no longer fight for what’s ours, to no longer advocate for our own ethnic interests. They do not want us to oppose mass replacement immigration, forced miscegenation and policies which deliberately undermine the White birth rate.

Shoehorning the so-called “frontier wars” into the Australian War Memorial is a war crime against White Australia and its aim is actual genocide – of us.

So, why has there been not a peep from the Lying Press about Lidia Thorpe’s disgraceful tweet? Because the idea behind Yassmin’s tweet which caused so much fuss five years ago is now official Australian government policy.