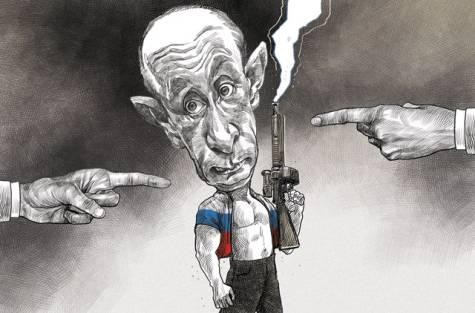 For all of you going on about what a great tough guy Putin is, I suggest you stop and take a look at the man. Putin is ex-KGB and military. He is known to have associations with the Russian mob and has gone to great lengths to "remove from circulation" anyone he has considered a threat to his power in Russia.

As a leader, Putin showed his true colours concerning the shooting down of Malaysian Airlines flight MH17.

Regardless of who shot the plane down it was a tragedy and regardless of the fact most of the world believed it was downed by separatist rebels with Russian supplied rockets it is totally irrelevant actually. The point remains that an un-armed innocent passenger jet liner with innocent passengers was blown out of the sky for no apparent reason. Mistake or otherwise.

Now a true leader, a great leader, would have acknowledged that it was a tragedy that should not have happened and would have done his utmost to secure the site and recover the bodies. Putin had that power, he had the army, he had the strength, he had control over the rebels and he would have had the world on his side had he done so.

But what does Putin do? He decides, because it occurred over Ukraine territory and he did not wish to admit that he had any control over the rebels, to use it as a political tool to blame the Ukraine government for shooting down the plane… he decided to let the thing escalate to try to provoke the Ukraine government and he did not give a flying f**k about the innocent dead nor the families and friends of those innocent dead.

Putin was concerned about one thing and one thing only and that was Vlad Putin.

Tony Abbott has every right to confront Putin over the way it was handled because Putin did have it within his power to do something about it. He could have put the Russian army into that area, secured the site, and there was not a bloody thing the Ukraine government could have done to stop him, or at least he could have instructed the rebels to withdraw totally from that area, but he chose to play a different game.

He just stood back and watched as the rebels trashed the crash site and did not give a stuff about it, he knew what was going on and chose to do nothing.

In choosing to display a total lack of empathy for those who died and their families Vladimir Putin has shown the world his true colours… those of an ex-KGB thug!

A great leader? Hardly, he had the ideal opportunity at his fingertips to show he was a great leader.

VISIT TO AUSTRALIA BY DR BENNY PEISER, A BRITISH ENERGY AND...

IS MELONI A PHONY?