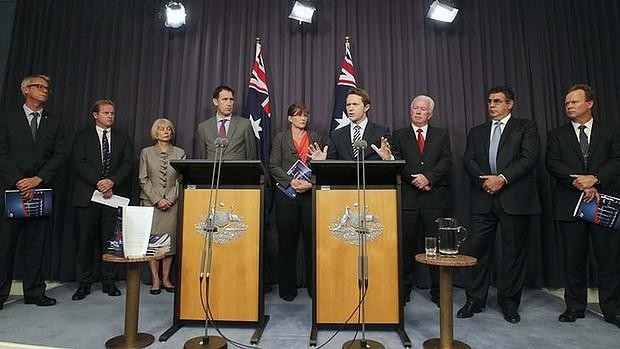 The revelation that ASADA has been issuing “Show Cause” notices to NRL players only confirms what I have suspected for a very long time about this “Blackest Day in Sport” bull-shit; it was politically motivated and there has been a heap of accusations made without a proper and thorough investigation taking place.

I have said all along that this would come back and bite ASADA right on the arse and that is exactly what it has done!

The court rulings in regard to the AFL last week certainly made ASADA look pretty ordinary and then we have our PM coming out and stating that it was a politically motivated witch hunt based on very flimsy evidence to take the attention away from ALP disasters.

My info is that the PM has rightly told the Minister for Sports Peter Dutton to “clean the joint out” and it has filtered back to ASADA and now this dopey lot have shit themselves and are desperate to save face.

The reality is, if I were an NRL player issued with a show cause notice I would be telling ASADA to prove it, because right now if they had any substantial proof that these players were actually injected with CJC-1295 and or GHRP-6, they have an obligation to charge them, that is if they did have proof … and they don’t. What’s more, were these substances actually banned at the time that they were supposedly injected?

Does ASADA actually have proof that they were in fact injected or is it just supposition?

ASADA are doing what they are doing because they know their claims will not stand up in court.

If they actually had the evidence, why play these games??

Now, I have a friend who knows Stephen Dank very well. In fact he has known Stephen for well over 20 years, since they were at University together.

My friend “A” who is a rehabilitation professional  was at one stage on the medical rehabilitation team of a major NRL Club, so not only does he know Dank personally he knows Rugby league.

“A” made this statement to me well over 6 months ago about this issue:
“I have known Stephen for a long time, I know that he will push the limits of science, but I also know that he would not do anything to cause harm to anybody.”
He went on to say that,”I have always found Stephen to be highly professional and ethical”.

What we need to remember, is that at the beginning of all this Stephen Dank made it publicly clear that he had been involved in a consulting process with ASADA and had E-mails in his possession where he had requested rulings from on ASADA on certain substances.

Dank, stated that he was of the opinion that the people he was in contact with at ASADA did not have a clue what they were talking about. In fact Dank stated on more than one occasion that, “I found it impossible to get a straight answer out of anybody”.

Right now ASADA, cornered have turned this into an issue of "reverse onus” on these players to prove that they are innocent.

By accepting the ASADA terms and conditions, these players will virtually be admitting that they have done something wrong without ASADA actually having to prove they have.

This move by ASADA stinks to high heaven! It's a bluff to cover up their gross incompetency as well as to cover up the fact they were prepared to act as the political pawns of Julia Gillard.

It really is time for the AG to step in and put an end to this fiasco and demand that ASADA produce evidence that will stand up in a court of Law.

If these players have done the wrong thing, yes they should be punished, but legally punished, not punished by innuendo.

Brandis, should be demanding that either ASADA put up or shut up. Charge them or apologise!