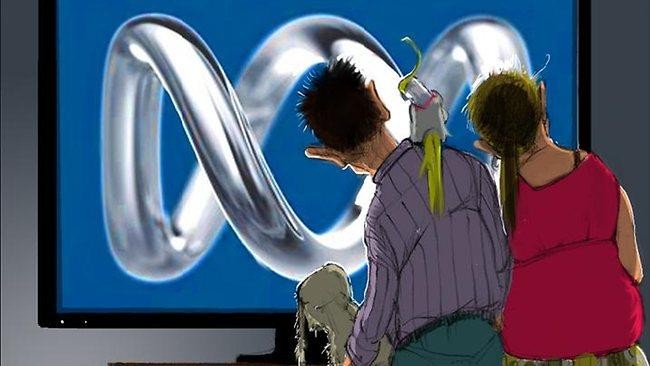 Remember before the election when lots of people were calling for a Royal Commission into the AWU and union operations in general and Tony Abbott was rather circumspect about it all? He stated that he did not want to jeopardise an ongoing police investigation.

Then…Bang, as soon as we had the election the Royal Commission into Union activity was announced.

Sure we had all this stuff about the AWU going around. We had the saga of the HSU scandal, with both Williamson and Thompson and now possibly Jackson. We had Williamson being charged and of course we had all the innuendo in regard to what a whole swag of TWU membership money may have been used for.

But hey, who made the decision to run with the Royal Commission.? What a bloody genius!!

“Or was it just a case of someone stumbling into accuracy?"

Now as the momentum of the Royal Commission gathers pace all these other ongong matters are actually being sucked into it.

Initially we had dear old Ralph, all on his lonesome, being the first witness at the Commission, virtually dobbing himself in but proving generally to be a pretty credible witness, putting both Wilson and Gillard in the frame and setting the seeds for what was to come this week. However by the time Ralph finished, Wilson was looking pretty precarious…Gillard well so-so but not good either.

Now, we have Gillard firmly in the frame and Wilson looking pretty stuffed and this 80 year old retired builder has given Gillard’s credibility a bloody good shake to boot. “Julia told me that Bruce had given her the cash so she could pay me.”

Nonetheless, we are just beginning and there is plenty more to come believe me and this is just the AWU.

I know that you are all madly cheering and so am I, because we all feel the same about Gillard. She is a bloody liar and lies to suit the occasion. None of us truly believes that Gillard did not know a lot more about what was happening, and she has blatantly lied to the Australia public.

However, while this has been going on another serious saga has been raging…..that of our "beloved ABC".

Sorry, did not mean to upset you all, I know it’s a sore point around here.

Hell, we have all been screaming about the bloody ABC's Mark Scott, James Spigelman, Mr Jones and his dragon missus on the 7:30 show, Faine and many more….

The ABC, the “Julia can do nothing wrong mutual admiration society"… Our ABC ….so they tell us.

That wonderful institution where you cannot work unless you are in the union and a declared socialist for good measure……the media institution that believes that if they do not report it ..It did not happen or if it did happen it will vanish into this big black hole.

Yep, that wonderful institution that we pay for that actually believes that Julia Gillard was a great Prime minister and running the country into the ground financially was just all good fun and Tony Abbott is an evil soothsayer.

Our ABC that believes that faking stories about asylum seekers is all in a good day’s journalism.

The same institution that believes Tim Flannery is a genius and Tony Abbott is some bloke who did not get elected as Prime Minister of this country.

This is the same ABC that refuses to report anything about the Royal Commission because it might make the ALP and Julia Gillard just look bad.

Why did I say …”Somebody stumbled into accuracy?”

Because all of a sudden after the momentum of this week's Royal Commission, people are starting to question and I mean question why the ABC is not reporting this stuff…

Now the same could be said for Fairfax media, but who really gives a rat’s arse about Fairfax anyway. If you have not already sold all your Fairfax Shares, you may as well flush the script that you have left, down the dunny for all the bloody things are now worth.

Not only that, Fairfax does not consume taxpayer’s dollars like a poker machine at the local RSL.

To be honest if you thought that there was any chance of pulling Fairfax out of the quagmire of quicksand it’s sinking into with Roger Corbett as its Chairman, you probably believe that there is something to be found between the ears of S H-Y.

Back to the ABC. As this RC wends its way, the revelations that will come forth about how the union movement as a whole operates and what little regard there is for members hard-earned dues, the sillier the ABC will look pretending it does not exist and as this all unfolds, there are going to be several people with serious egg on their faces and I believe we will have the privilege of watching this scum that call themselves providers of balanced media reporting, fall on their swords.

I believe that Mark Scott will be first, and that it will not be long into the future and if a certain Federal Minister is not careful he may find himself without a portfolio when the dust settles…Just saying….

Already, twitter has gone into the stratosphere this week, Twitterer’s going ballistic as to why the RC is not being covered by the ABC and this is only the beginning…..remember how we had people power change governments and dictatorial regimes and tear down the Berlin wall ?

There are going to be a heap of Union and ALP casualties courtesy of this Royal Commission but there may well be a heap of collateral damage at the ABC because of it and Tony Abbott will be laughing his head off.

Yep!! I think somebody may have just stumbled into accuracy and we the unwashed silent majority may just get our wish to have “our” ABC back again as well as having the joy of watching a whole lot of ALP & Union personalities including Julia Gillard squirm in their undies at a Royal Commission.