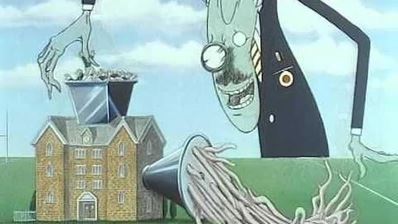 My kids’ school is teaching them to be ‘progressive’ feminists.

Public education and a national curriculum are failing our kids. The following propaganda piece was emailed to parents from my local high school this week:

Our Year 12 Modern History class has been studying First Wave Feminism in Britain for Term 1.

They are investigating the origins of the movement, the status of women up to the 19th century, the emergence of the suffrage movement, and notable suffragettes and the way in which Women’s Social and Political Union (WSPU) leader, Emmeline Pankhurst, and suffragettes carried out peaceful protests, demonstrations, civil disobedience campaigns and controversial militant action to achieve suffrage (the right to vote) for women throughout Britain.

International Women’s Day (IWD) is celebrated around the world on the 8th March and is a day to reflect on the sacrifices women, and men alike, have made to enfranchise women.

Our Year 12 students will also take time this week to reflect on the women’s movement and how far we still have to go to achieve gender equality.”

Are you serious? A whole term of senior high school history education dedicated to feminism? How is that not just a single hour as part of a broad survey of significant political developments over recent centuries?

Sure, women’s suffrage is an objectively important milestone in the pursuit of equality for all, but why the enormous leap from observation of historical movements to participation in contemporary contentions?

I emailed back to the school, copying in my local Liberal Party federal MP and the Liberal federal Minister for Education.

“Thank you for your newsletter, including the notice of the political propaganda you’re teaching in a publicly funded school. I’m sure in the minds of many this is not controversial and may have slipped by unnoticed, but that may be evidence more of groupthink than academic rigour.

I quote, “Our Year 12 students will also take time this week to reflect on the women’s movement and how far we still have to go to achieve gender equality. “

In subscribing to the ‘progressive’ narratives of “gender equality”, I wonder how sincerely those teaching this political opinion have considered the criticism of their position.

For example, can you cite any Australian law or public policy which unjustly treats either gender as ‘less than’ the other? I will fight beside you to change that.

Are you equally celebrating men in any way? Is your presumed public indifference on equality for men conspicuous by its absence?

What message does that send to the young men and women you’re charged with educating?

I suggest you stick to the facts of history and not the subjective ideologies you prefer which may or may not have the intellectually honest foundations every sincere educator should value above all. After all, we are teaching our children how to think, not what to think… aren’t we?

For the record, my philosophy is to oppose all injustice where I encounter it, not just favouring one gender or ethnicity, or excluding any. I celebrate equality under the law for both genders and all ethnicities.

I am, however, concerned by the school’s public and transparent subscription to a partisan narrative as a government funded school.

If you can’t see the inherent problems and potential for abuse of power in this scenario, then further study of history may be required.

I look forward to the Principal’s response and assurances that ‘progressive’, feminist narratives will no longer be taught as unquestionable fact.

Either than, or else a reasoned explanation why our children should continue to be indoctrinated.”

Feminism hasn’t been relevant since women got the vote and equal pay under law. It has struggled for purpose and relevance ever since.

It has morphed into a toxic struggle not for justice, but power. It is wilfully ignorant & dismissive, if not derisive, of the injustices suffered by men, especially when women are the powerful perpetrators.

While 82% to 85% of Americans believe in social, political and economic equality of the sexes only 18% to 20% are willing to call themselves feminists.

You can define feminism however you want in theory, but the evidence suggests that nobody believes it is only about the struggle for “equality” any more.

Equality before the law has been achieved, and now those desperate for something to be angry about demand more. They make unreasonable demands seeking equality of outcomes.

Actress Michelle Williams is a great example. She is whining about not being paid as much as Mark Wahlberg, claiming her work is equal to his – a ridiculous claim uncritically repeated by the leftist media complex.

The pay you can demand from an employer is not a statement of your personal value or even compensation for time away from your family, but a reflection of the economic benefit you can bring them.

An athlete is not worth more to the community than a childcare worker, but an athlete can help sell 50,000 expensive tickets.

White male Wahlberg is not worth more than oppressed female Williams as a person, but the name Wahlberg on a movie poster can help sell a whole lot more movie tickets.

It is materially relevant that the actor’s worth isn’t just their acting performance. It is their ability to attract ticket sales.

Williams wasn’t even ranked in the top 100 until 2017 when she debuted at 98. To say both actors had the same value to the studio, and should therefore have the same pay, is just plain ignorance.

This ignorance is what the public education system is now peddling as indisputable. This failure is impossible to escape though, because there is no competition between the states to see who can produce the best education outcomes.

All that matters, apparently, is that the outcomes are seen to be equal, not matter how miserable they may be.