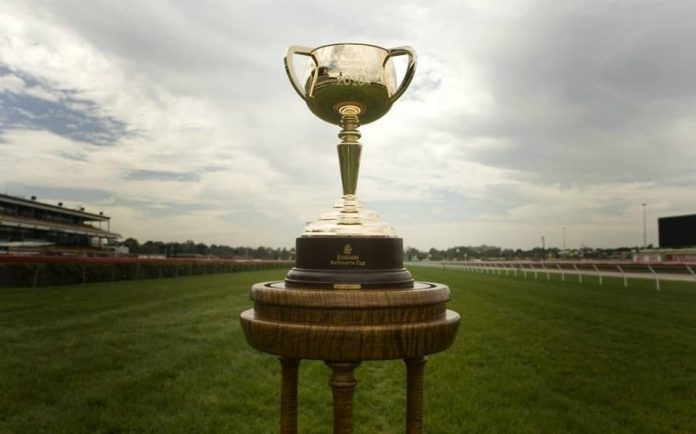 I battled with another bidder at Inglis sales to secure an ordinary looking yearling for a measly $7,000. "Why would you want that horse?", the other bidder asked. "To win the Melbourne Cup with", I replied.

Winning the Melbourne Cup and playing for Fitzroy in a Premiership were my boyhood dreams. I played for Richmond and nowhere near a premiership… but I had one dream left.

Rising Fear was that horse. We called him Tojo, as a stable name.
I took him home and broke him in.

He had won a string of good Sydney races and I was now certain he could win the Melbourne Cup.

I had spent months training him to pick up a replica of the Melbourne Cup in his teeth. Then, he would replace the Cup on the table and bow. Tojo was a willing learner… for him it broke the boredom of stable life.

When I hopped on him he would prance and kick. When I put my 3yo son on him he would tippy toe around the front lawn, stopping to jerk him back into the centre of his back. Tojo was no oil painting but he was special.

I took him to the Brisbane carnival and he came home with the O'Shea Stakes, a 2nd in the QLD Derby and a 3rd in the 2-mile Brisbane Cup all in ten days.

He was a tough 3yo now and had qualified for a start in the 2 mile Melbourne Cup.

We picked up the Colin Stephens Quality Hcp at Randwick, a 2nd in the NSW Derby and off in a plane to Melbourne.

Now to take on the international horses in the big one.

I had ridden him in most of his track work and stayed most nights in the stable with him when interstate. He would fret in a strange place.

Now he was as ready as I could get him. Carrying my weight in all his track work made the weight of the jockey feel like a feather.

He was rock-hard fit but fresh from sand dune work and long swims in the ocean at Terrigal. He lit up when he saw the expanse of a verdant track.

He had pipe-opener on the Saturday in the Dalgetty, running home nicely for 6th.

He was now cherry ripe for the big one.

I had engaged Malcolm Johnson, as he had already won on the horse and knew him well.

On the Sunday, Malcolm rang me to say he was going back to Sydney as he had a full book with Doc. Chapman on the Tuesday. "Shit, shit, shit, shit!"

I got hold of the only unengaged rider left I knew, Bob Skelton the trouble was he was a Kiwi and I didn't like Kiwis much, especially Kiwi jockeys.

He agreed to ride my horse.

"I want you to come down to Mornington and run him up the last 400m on Tuesday morning" I said to Bob. "I need you to get the feel of him." Bob did let him run home the last four, hard held, through the Mornington mist.

Bob dismounted, "This horse will sprint, Larry", he told me. My heart sank. I knew he wouldn't, he couldn't. He was a dour one-paced stayer. He would win the Melbourne Cup if he was allowed to bowl along in front at his own pace.

But how does a cartoonist explain anything equine to a Kiwi jockey, I berated Bob and told him to forget all about this sprinting crap.

I rang Singo and told him to catch the next plane to Melbourne. "We're bringin home the Melbourne Cup, mate!"

I knew there was not a horse in the world that could beat him over two miles that day.

I had spent two years training him for just this one race, but only one day training a jockey to ride him.

Singo was on the next plane with his pockets full of cash.
Rising Fear stayed a firm 50/1 in the ring.

I legged up Skelton with deadly serious instructions. I looked him straight in his two little glassy goanna eyes: "Take him to the front after the end of the straight, let him bowl along, balanced. At the 800 drop your hands and let him do it all by himself, do not hit 'im! He knows what to do."

"Ok Larry, mate", I could hear him thinking: "What would he know about a horse?"

He trotted out on to the track to greet a 90,000 screaming crowd. I could see Tojo coming back to scale and me pressing my thumb into his nearside foreleg muscle. That was his signal. He would pick up the Cup in his teeth and raise it high in the air. The photo would be rocketed around the world in an instant.

My son and stable-foreman, Jamie, Singo and I climbed the stairs to our seats.

We were sitting a good 100 metres back from the winning post. The whole place reeked of tradition, and importance.

Phar Lap had graced this track. Some of the other great horses I remembered seeing as a kid, selling racebooks at Caulfield, had raced into history on this same Flemington turf with honor and bravery.

When the barriers opened the roar was deafening.
By the end of the straight Skelton eased him out from 7th position, took him around the field and settled him beautifully into the lead, keen but relaxed.

He led the huge field up the back and around the far turn. He was still beautifully balanced with his ears pricked and still relaxed at the mile.

Tojo loved a big race and you could see him enjoying every metre of it. At the 800m Skelton had not dropped his hands but I wasn't too worried. Tojo was fit and he would run the two mile right out.

They were on the home turn and he was still leading by three lengths. I looked back and they were starting to struggle behind him.

They straightened at the 400m and he was still in front by three lengths with plenty in the tank but now I could see the soles of Skelton's fucking boots. He was still swinging on his mouth.

"Faaark! That bastard still thinks he will sprint!" I muttered. Tojo clearly had plenty of petrol in the tank but Skelton was refusing to let him go! He was convinced in his thick little head that he would explode at his command.

With 300m to go he was still in front with nothing gaining when out of the pack came the pride of the Arabs, At Alaq.

I knew At Alaq well, he was the only horse I was remotely scared of. He had a very short sprint. He raced two lengths past the hard-held Tojo. My idiot jockey now decided to let Tojo go.

He didn't sprint. He couldn't, because he can't.

With his one even pace, he slowly set off after At Alaq with barely 150m left and with Skelton pointlessly belting the shit out of him.

He regained the two lengths on At Alaq who was predictably weakening.

Skelton ran him right up the rump of At Alaq. It appeared to be in slow motion, there was a sort of silence above the roar. Then Skelton reefed him out to get around At Alaq and had to get him re-balanced all over again.

He was gaining every stride. The post loomed. One length, half a length, a neck. Within 10 metres of the post, I watched him lunge at At Alaq with every ounce of strength remaining in his brave, exhausted body. The crowd erupted.

Tommy Smith, sitting 4 or 5 seats along, jumped in the air, he stuck his head out from the line of people and looked at me, his hands high, "You've won Larry!"

Jamie put an arm around my neck… "We've won Dad!"
I thought how happy my family would have been at home watching on TV.

But I wasn't sure. We were a long way from the post and the photo judge was taking what seemed like an hour and anyway how could he possibly have won when that little Kiwi had done just about everything possible to ensure he couldn't.

The photo showed Tojo had lost the Melbourne Cup when he should have won by at least two lengths. When he returned to scale, Skelton refused to look at me, he knew he had cost us the Cup.

Christ knows what Singo won. He had trifectas and quinellas every which way but he reckoned if Tojo had won it would have been a collect of about $5 mil. (maybe $15 mil in today's money)

The money didn't matter, the Melbourne Cup did. Still does.

THE STICK INSECT IS AT LEAST KEEPING HER POWDER DRY