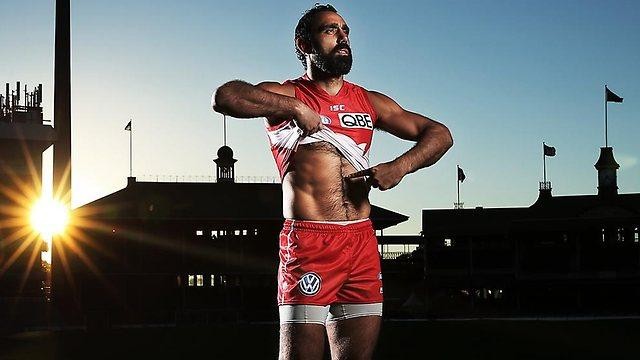 Why did we adore Lionel Rose but hope Mundine gets sat on his arse? Why did we love Polly Farmer and Syd Jackson but dislike Adam Goodes? Because we are Australian! We are racially agnostic and we are colour blind. We can choose who we will like and we will always give everyone of every race and colour a fair go providing we are given a fair go in return.

Mundine runs his finger across his throat and Goodes simulates throwing spears at us in a specially invented war dance. And we are supposed to respect that sort of bullshit?

We are fair dinkum Australians, we’ll buy you a beer and pick you up when you’re down. We’ll shout you a feed and drive you home when you’re pissed, you will never have a better friend for life… but if you choose to crap on us then expect a full tank of sewage around your neck in return.

I have worn the red and white of “The Bloods” for most of my playing career. Right down to St George and the lowly Woy Woy Swans where I retired at near 50 after my son had played in the centre for the same team for ten years planting balls on my chest at full forward.

I’m a Swan fan through and through and at one time, when they were millions in debt, I was negotiating to buy them, before Mike Willesee put together a consortium.

So when one of the most talented indigenous players ever (one of many) joined the club it was an exciting time. But that incident with a 13 year-old girl changed everything for ever. We saw the vindictive, nasty Goodes. The Goodes, regardless of his talent, Australians will not cop, and they showed it.

So who has chased Goodes out of the game? It was the very people who excused his provocative and insulting bullshit.

We made him Australian of the Year only to be told we were racists. The media’s support of him only emboldened him further, so he figured it was okay to rubbish his fellow Australians as “invaders”… that it was okay to demand that a schoolgirl be removed from the MCG for calling him a name.

But it can be resolved, he can play again to cheers instead of boos… we can again enjoy his talent, shake his hand and be proud of his Aboriginality. It will take those who love to bathe in the warm glow of their own political correctness, along with the dumb AFL and the Left media to shut the fuck up and allow the arbiters of the sport, the crowds, to sort it.

All it will take is for Goodes to do a Bronwyn and apologise for doing what he did. I know, you know, and every fair dinkum Aussie knows we are the best forgivers around. Then he can run on to the field to cheers and applause with nary a boo to be heard. That’s what Aussie crowds really want and Aussie crowds, as one, are the best at knowing what’s fair.

What Goodes did was wrong and insulting and he has a window of opportunity to resolve it for the sake of the game. We said sorry, now it’s his turn. We would all love to see him back as a player and not as an Aboriginal activist. He can save that for his political career rather than bring it on to our sporting fields.

But I fear Goodes would much rather wallow in his hatred of “invaders” than return to what we admired him for and what he is best at.

And that's a shame.

LONE WOLVES WHO PREY ON OUR FOOD