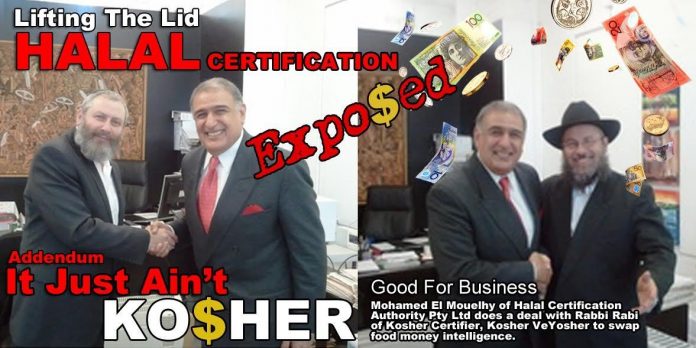 It seems that Arabs and Jews are avowed enemies until it comes to sharing in a world-wide scam like a food tax. Since The Pickering Post published its 13 Part Halal certification expose earlier this year, the Federal Government has moved to establish a Parliamentary inquiry into all forms of food certification including halal.

The six month inquiry by the Senate Standing Committee on Economics will also cover certification schemes for kosher foods, organic products and genetically modified foods among others.

We all know it isn't organic food certification which has prompted the inquiry and we're pretty sure it isn't genetically modified certification that’s upset supermarket consumers.

Could it possibly have been vegan certification? Hmm, maybe the Heart Foundation’s ‘tick of approval’, or weight watchers or that gluten free stuff? Don't think so!

Whichever it is that’s prompted the Senate inquiry, there are too many special interest groups and faith-based mobs that have their teeth firmly embedded in our food chain to the combined tune of hundreds of millions of dollars. Only a fool would think that sort of money impost on the food industry isn’t passed on to we the consumers.

Food producers brush off food certification as another form of market specific "advertising". Every business operator knows that any cost impost on production, marketing and distribution must be added to the end price.

Any food producer who says that the hundreds of millions of dollars in food certification costs is not passed on to the consumer is lying.

The mountains of feedback I’m getting indicates it’s mainly faith-based food certification that has got the nation’s blood boiling… in particular, halal certification. Aussies don’t want to keep funding the growth of Islam, an ideology involving Sharia law, jihad, sex slavery and intolerance… all of which are which are at odds with basic Australian values.

Our investigations, with the input of Kirralie Smith of Halal Choices and others – including anti-halal certification whistleblowers* within the Muslim community – have exposed that halal certifiers are using your grocery money to fund the growth of Islamic schools, mosques, bringing hate preachers to Australia and other global "Islamic causes", as well as the admitted personal enrichment of private certifying Islamic businessmen.

(*Not all Muslims support the money-making halal scam. Many see it as diametrically opposed to Islamic teachings)

Is it the function of our supermarkets; Woolworths, Coles, Aldi, IGA, Franklins and Foodland to redirect your grocery money to Islam, or even Jewish causes, because that’s exactly what’s happening.

These links are easily found by an online search. It is the duty of all Muslims to push for the expansion of Islam to create a global caliphate. This is a directive of the Qur’an.

Yet, when reporters ask the Australian Crime Commission, the Australian Federal Police or AUSTRAC if halal money funds terrorism, they get the stock standard answer, “We have no evidence of….”.

Well of course they have no bloody evidence of. That’s the way the circuitous money trail has been designed… to obfuscate. Once the funds are moved overseas to accounts in Islamic countries, our blokes haven’t got a hope. Crooks and terrorists are many steps ahead of our local authorities, and our boys know it.

The Financial Action Task Force (FATF) is a global independent intergovernmental body that develops policies to protect the global financial system against money laundering and terrorist financing. FATF recommendations are recognised as the standard for global anti-money laundering and counter-terrorist financing. The Australian Institute of Criminology (AIC) references FATF for its intelligence on terrorist funding.

The FATF said terror funding is undertaken by exploiting legitimate charities where funds raised for charitable purposes are diverted to individuals or groups associated with terrorism. Sham charities are common. In a number of cases the charity collects funds intended for humanitarian aid or welfare relief but a percentage is specifically earmarked for the financing of terrorists.

Many of the implicated “charities” form part of a complex web, moving funds between multiple accounts held by various charities, sister charities, companies (both legitimate and fictitious) and individuals. Multiple conduits are used in the country of money origin and transferred across different jurisdictions, before eventually being transmitted to the intended recipient(s) – terrorists.

Funds are first deposited into the bank accounts of charities, or of individuals associated with charities, before being transferred using cash deposits, wire transfers or other remittance schemes.

AUSTRAC lists “financial contributions through formal charitable donations” as one of the three most common methods by which terrorism funds are raised within Australia.

Islamic charities are the most common cause of funding terrorism, admitted to by our own Agencies. Australian halal certifiers donate large funds to these charities, some with motherhood titles such as "Human Appeals International" or more Islamic titles such as the "Al Imdaad Foundation".

You can see some of the Islamic charities with links to terrorism here:

Part 12 of our halal series, "The Terror Tax", shows clearly how just one of our Halal certifiers, "Halal Certification Authority Pty Ltd", donates money to one globally linked Islamic charity which has ties to Hamas.

Our incompetent media choose to look away, relying on stories by young, naïve and clueless kids who prefer to not dig into the facts.

One tactic by these reporters-in-denial is to ask Jewish kosher certifiers if they support an inquiry into halal certification. That is akin to asking a Kings Cross nightclub owner if he supports an inquiry into…the nightclub industry.

When senior rabbis are asked their views they are quick to accuse anti-halal campaigners of being "ignorant and prejudiced". Well, they would say that wouldn’t they?

You see, inside material sent to The Pickering Post reveals the kosher boys are tucked tightly up  in bed with the halal boys.

Deals have been done between halal certifiers and Kashrut authorities (aka kosher certifiers) to share data and market intelligence for the mutual benefit of both parties.

It’s now in their mutual interests to share tactics and strategies to get both their greedy teeth even deeper into your food money. It’s about increasing market share and their bottom line.

Kosher VeYosher states, "We share information from audits and research costs and contacts for investigating foods produced in every corner of the globe."

They say politics makes for strange bedfellows. Hmmm, so too does scammed money.

The problem for the kosher boys is that they are assisting with the attempted destruction of their own people. Money the kosher boys help to raise for their new business partner is partly donated to an Islamic charity with direct ties to Hamas.

The Hamas Covenant, also known as Hamas Charter, states, "… our struggle against the Jews is very great and very serious" and it calls for, "the eventual creation of an Islamic State in Palestine, in place of Israel and the Palestinian Territories, and the obliteration or dissolution of Israel."

It emphasises the importance of jihad stating in article 13, "There is no solution for the Palestinian question except through Jihad. Initiatives, proposals and international conferences are all a waste of time and vain endeavours.”

Also from the Charter:
The Destruction of Israel:
"Israel will exist and will continue to exist until Islam will obliterate it, just as it obliterated others before it."

The Call to Jihad: "The day the enemies usurp part of Moslem land, Jihad becomes the individual duty of every Moslem. In the face of the Jews' usurpation, it is compulsory that the banner of Jihad be raised." (Article 15).

Anti-Semitic Incitement: "The Day of Judgment will not come about until Moslems fight Jews and kill them. Then, the Jews will hide behind rocks and trees, and the rocks and trees will cry out: 'Oh, Moslem, there is a Jew hiding behind me, come and kill him.' " (Article 7)

I wonder what the Australian Jewish community makes of this very unholy food tax alliance?

And what about the Muslim community?

What do they make of Mr Mohamed El Mouelhy cutting a deal with the Jewish Kosher boys to personally enrich himself (“Halal certification has made me a millionaire" – Today Tonight.)? Is this alliance permissible within the teachings of the Qur’an?

So the next time you see or read about a Rabbi defending halal certification, nod your head and say to yourself, “Yep, of course he does.”

If you want to have your say on halal or other food certifications, your best opportunity is right now.

Make a submission, show your concern to the Senate Standing Committees on Economics here:

WHO DO YOU LOVE BEST… MUMMY OR DADDY?

TWO QLD DISASTERS RETURN… with no guarantee of success