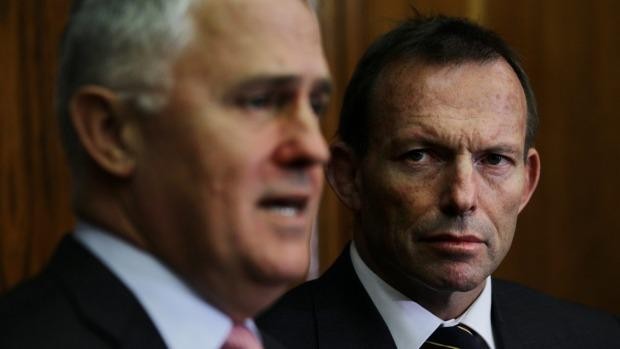 Stripping active jihadists of their citizenship may prove more difficult than stripping Gillian Triggs of her Commission. Triggs cannot be dismissed as she enjoyed a five-year Rudd appointment in 2007 and a further five years bestowed by Gillard in 2012. Ten years of this obnoxious woman has left both sides of Parliament squirming in their seats. Only Fairfax and the ABC give the lying Triggs unqualified support.

I will stand corrected but I believe the appointment was officiated through the Office of the Governor General at the time, which would mean that Triggs cannot be dismissed. But there are ways around that, if Abbott wants to get fair dinkum.

The first way is to simply deny all funding to the Commission, rendering it inoperable. The second, under executive order, is to declare the current Commission unviable (which it is, as it clearly has lost the confidence of the Government) disband it and set up a new human rights body, re-employing those people of value and contracting a new Commissioner.

The latter option is preferable as Labor could then anticipate the reciprocal ability to replace future unviable Coalition appointments. All governments should utilise that option anyway as sustaining acolytes of old administrations doesn’t make for good government!

People like Triggs (who refuses to resign) should not remain free to promote an opposition and undermine an elected government.

And so to revoking the citizenship of murderers and child rapists.

There is no worse dichotomy within a conservative government’s Cabinet than an extremely rich socialist who knows no poor people. He lives in a leafy bayside property worth many millions, he mixes in the most exclusive of circles where only the best of wines are consumed and he speaks convincingly with a spattering of long words.

His adherence to socialist ideals is borne of a nagging guilt complex about how he acquired his wealth, but this man has no philanthropic tendencies.

He sees himself as a leader of men but has failed dismally at his only attempt and there is no chance that his Party will accept him in that role ever again. His only support is from a media-backed Opposition that tries relentlessly to rekindle talk of a leadership challenge.

Both he and Julie Bishop possess the loudest of dissenting voices in Cabinet. But Julie’s voice is one supporting foreign aid and, as Foreign Minister, she is furious at the cuts. It’s hard to hold your head high diplomatically when your donations to so-called needy nations have been halved.

But the man from the leafy bayside property has concerns about stripping jihadists of their citizenship. There is the rule of law to be observed and a signed UN convention that prevents an Immigration Minister unilaterally carting a bloke in a suicide vest outside the 12 mile limit and leaving him there, albeit with judicial oversight.

The man from the leafy bayside property wants instead a court adjudication where legal aid is available and bail can be applied for. Where incompetent, soft Left magistrates can give community service to budding terrorists, alleged murderers, sex offenders and paedophiles. Hmmm, ring a familiar bell?

Here’s the real predicament that Cabinet members have only just begun to realise:

• There are hundreds more of our Muslim “citizens” already in Syria we can’t possibly know about. Hizb ut-Tahrir is an internationally proscribed terrorist cell active in Western Sydney that recruits budding head-choppers for ISIS and provides passports, money and instructions on how to get to Syria and back without detection. Hizb ut-Tahrir’s latest advised destination is to get to The Maldives on one passport before travelling to Turkey on another where someone will be waiting at any of a dozen porous border posts to take you to al Raqqa. If ISIS agrees to let you return on the promise that you will behead a few non-Muslims back in Oz, then you use your second passport to return to The Maldives, or any of a dozen other destinations, where you destroy it before hopping a Qantas flight home where you produce your original passport and no-one can be any the wiser.

• Hizb ut-Tahrir is allowed to operate as a recruiting organisation in Australia by ASIO because, “We need to monitor what they are doing and we don’t want to drive them underground”. WTF? So we should allow packs of rabid dogs to roam our streets so we can keep an eye on them? Bloody hell, Hizb ut-Tahrir thinks all their Ramadans have come at once, and it is running rings around ASIO anyway!

• So now the Government wants to deport these radicalised head-choppers to where they have a second citizenship, but who says that country is likely to accept them as known terrorists anyway? And should we really be in the business of deporting terrorism? Or should we be snuffing it out?

• Okay, so let’s say they don’t have a second citizenship. “Arrest them, charge them and jail them”, says Abbott. Hmmm, so it’s back to our soft Left judicial system that produced Man Monis.

We don’t have the Abu Ghraibs or Gitmos that the Americans had but we DO have emptying offshore detainment centres where our luxuriously paternal legal system can be made inaccessible to budding or confirmed head-choppers under the current high terrorism alert.

That would require Ministerial adjudication and that’s something our friend from that leafy bayside property won’t entertain but he should be told to sit down and shut up because there are 41 backbenchers who disagree with him.

Abbott has an arsenal of armoury on this matter and Shorten is afraid to disagree with any harsh anti terrorism measures, making Green and Independents’ votes obsolete. Only Julie (for different reasons) and the man from the leafy bayside property are protesting,

…and the leafy bayside bloke is leaking (indirectly of course) to his special media friends.

WHY RUDD’S ETS IS A SUPER CON

GAY RIGHTS FOR GIRLS BUT NOT FOR BOYS!