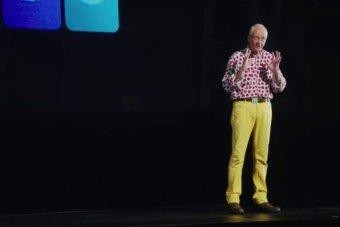 I heard Andrew Bolt describe the use of Mr Funny Shirts to promote a multi-million dollar ad. campaign on the Intergenerational Report as a mistake. I must disagree with Andrew. The man now looks like the disingenuous, self-promoting ABC fool he is.

The Rudd Gillard Government paid this idiot a fortune to personally lie to young impressionable schoolchildren about the global warming hoax. He talks the sort of ABC garbage the Left loves.

"I shouldnt have done it", he now tearily admits.

The campaign now has more publicity than it deserves. In the process Mr Funny Shirts has angered his Left following and the Right always ignored his ill-informed rants anyway.

Regardless, both sides made sure they watched the ad. and voiced an opinion.

Imagine if the Libs had used Andrew Bolt to promote the cause! It would have been a non event with viewers switching off saying, “Well, Bolt WOULD say that wouldn’t he?”

But the ABC’s Mr Funny Shirts would never agree with anything the Libs said, thus the storm of protest from the Left and the resultant exposure for the ad. and the justified vilification of Mr Funny Shirts as a traitor to the ABC cause.

Congratulations to Christopher Pyne who realised the Left will always sell its soul… but only when the money's right. $250 k I hear.

A WEALTH OF TALENT

All on the Road to China