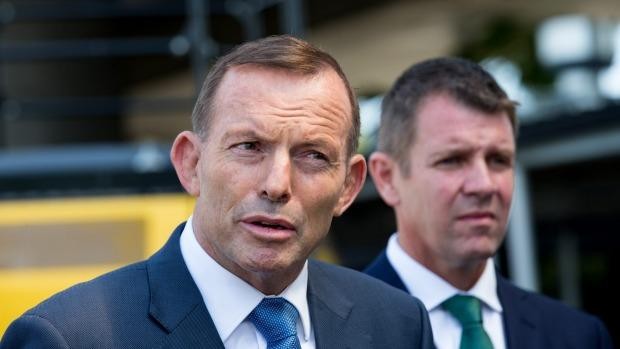 When Julia Gillard needed the support of crossbenchers she ran around like a blowfly in a strange shithouse, cornering and cajoling everyone who would listen. As PM she was then able to get no fewer than 560 pieces of legislation through both Houses. Tony Abbott has led from the back, sitting on his hands, and leaving the cajoling to relevant Ministers.

He is losing sleep as well as hair. He is stressed and appears to have lost weight. Leadership always takes a high toll and in Abbott’s case it’s been a very long 18 months, it has been more difficult than he expected and neither the media nor his Party has warmed to him, in fact the media still despises him to the same extent that they adored Gillard.

That’s the way it is and, whether he is a good bloke or not, nothing will change. He is a sitting duck for the ABC and Fairfax who will always hold him responsible for killing their beloved Julia.

Bill Shorten needs to do nothing. He can sit quietly preening himself for the top job while Abbott self-destructs, scrambling for an acceptable persona under the weight of media bias and dissatisfaction within his own Party.

The overnight switch from a “budget emergency” to “an acceptable level of debt” was astonishing in that it defied every economic forecast and discredited 18 months of the Government’s grandstanding determination to bring the budget back to surplus.

So why Abbott’s outrageous claim that the Government has done well in getting the budget back on track? (Should be okay in 40 years or so I think he said.) Well, there is the disaster of the Victorian election that was handed over to a radical Left union base and then the inexplicable Queensland election where a bunch of inexperienced no-names gained Office. Abbott was seen to have been a factor in both cases.

He could not have risked his friend Mike Baird’s NSW election, Abbott would certainly have gone down with him. So he opted for a “steady as she goes, boring May budget” election-mode stance.

Meanwhile Christopher Pyne tried to put the wind up the Senate crossbench with a University reform Bill he knew would not pass but he hoped might be seen as a double dissolution trigger.

It didn’t fool anyone, not even two galahs like Lambie and Lazarus. They knew Senate quotas would be halved which would have allowed even more geese on to the crossbenches, this time many with fresh six year tenures.

The latest time for a DD had passed mid last year, now it’s an impossibility because another three months must pass before Pyne can reintroduce the same Bill. Only then can both Houses be dissolved, but Abbott needs every Bill knocked back in case a joint sitting is needed, and with the 2016 election looming who would risk Shorten winning the Lower House with a Senate majority? And anyway what does Abbott now have to sell?

So the Prime Minister’s Office is sending out mixed signals in all directions and it’s doubtful anyone knows what the main game is! Conservatives must be pulling their hair out, things are fast reaching a critical stage because Abbott can never fully recover.

But “recover” is the wrong word because he was never really there as a leader, as his close colleagues once told him!

Tony is now presenting as “the real Tony” just as Julia tried “the real Julia”. It won’t work because recidivist politicians always revert to type.

It’s pointless standing in the one spot complaining of Senate ferals and media bias… that won’t change. Abbott’s time has passed, he was given a record majority with a massive mandate and the people’s will was denied… history shows, under those circumstances, there can be no better chance of a DD success.

He may not have won the Senate but a joint sitting majority would have passed every Bill he had put up for a second time. His choices were to personally negotiate a passage through the Senate or call a DD, he did neither.

Those conservatives who have an affection for Abbott must give way to the greater conservative goal. The prospect of Shorten as Prime Minister is far too high a price to pay for Lib loyalty.

My guess has always been there will be a leadership change with Morrison getting the nod at 10/1.

THIS SITE HAS BEEN HIJACKED!

SOPHIE’S CHOICE… should be to go back and work Indi