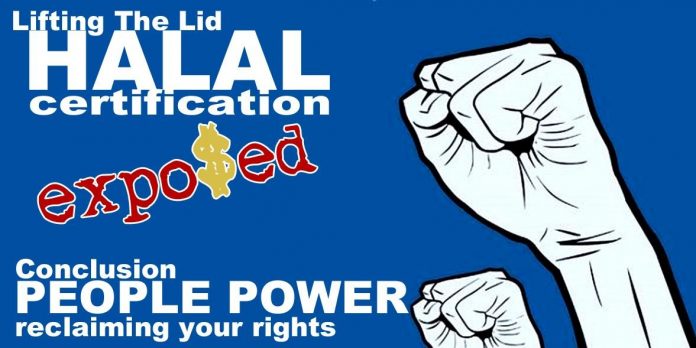 That’s not including Senator Jacqui Lambie who will be introducing a Private Members Bill that will demand transparency of the halal money flow.

I had intended to keep this series to a tidy 12 parts, but as this investigation was unrolling, I was sent alarming insider information about halal certification money and its links to terrorism, which needed to be checked out.

It seems Mr. Mohamed El Mouelhy has a number of adversaries all too ready to tip a bucket on him.

Documented here in this series is irrefutable evidence that halal certification is a giant scam affecting both Muslims and non-Muslims – and depleting our grocery budgets by billions which, at least in part, are being ingeniously redirected to terrorist groups.

Andrew Lamming was one of the disgruntled Coalition backbenchers who tried to force a spill recently.

Lamming publicly announced late yesterday, March 4, 2015:
“Halal update: After weeks of Canberra and Industry meetings, I have secured today Ministerial support for a Halal policy to protect Domestic Aussie food manufacturers. This next month will be spent consulting with selected NSW and Qld firms.”

Lamming stated previously, “Insiders tell me Halal is costing 3-4 times more than Kosher. This week I notified the ACCC. ?#‎cashforclerics? This should be ‘not-for-profit’ and ‘user-pays’. Stay tuned.”

Cabinet is being forced to move on halal certification. It’s in their best interest to do so. Halal certification will be another test of the PM’s resolve to "keep Australians safe" and to protect and preserve the rights of consumers.

Companies are charged on a "capacity to pay" just as the the New York mobs did. There are no set fees. “How much can I squeeze out of you”, is the only guideline.

Food wholesalers tell me they shop around for halal certification but it’s a slippery exercise trying to nail down a price. Certifiers charge whatever they can get away with.

I am told certifiers will not give a quote over the phone. Some want to visit the premises to try to assess what the business's capacity to pay is before they’re given a certification price.

One food executive told me he would not agree to a meeting with certifiers until he received a written quote… a reasonable business practice.

Quoted fees to one wholesaler varied from “a couple of thousand dollars” to “$35,000”, for a halal logo for one year.

There has to be a better way – and there is.

In 2014 Indonesian Health Minister Nafsiah Mboi said, “In other countries, it is common for certification to come from the government, those are the ones that are recognised and accepted.

"After 2018, the MUI (Indonesian Islamic clerics) will continue to play a role on the religious side but the certificates will now be issued by the government with a small application fee payable to the government."

Halal approval was never intended to be a wealth creator for certifiers, rather a method to ensure compliance with interpretations of Islamic law for the confidence of Muslim consumers.

Lawmaker Hasrul Azwar of the Indonesian PPP (Islamic) party argued that if the government oversaw the halal certification process it would control the amount the MUI could charge applicants while the proceeds would be kept as additional income for the State.

In Australia it’s a multiple-dip pyramid scheme, where more than $360,000 in halal fees has applied from one abattoir to one little kebab shop.

The money goes to private operators and Islamic bodies when it should be going to the government to benefit all Australians. After all, it’s our hard-earned money. The Australian Government has lost all control.

Most politicians are afraid to grasp the thorny nettle for fear of being labelled "racists", "bigots" and "Islamophobes" by an uninformed media. But it’s gone long past that. Who cares what uninformed fools say?

Several politicians I have spoken to say their offices are fielding hundreds of halal certification complaints daily from constituents.

One says, “This appears to be a huge disconnect between the general public and the media.”

The comments I’ve received from Muslims in the wholesale and retail food industry are the same as those from non-Muslims – they too feel they are being ripped off.

I started out this investigation with an unfair view that the halal rort was a scam all Muslims were complicit in.

I was very wrong! And I was shocked at the degree to which Muslims wanted to speak out anonymously.

This led me to believe the whole scam was being organised only from the top of the Muslim tree with these operators skimming money from infidels and Muslims alike, below them.

Australia has two halal markets; domestic and export. Our Federal government must draw a line down the middle and separate them.

There are no non-food products listed in the Qur’an and Hadith. The non-food additions are invented by the scammers. Many Islamic scholars confirm this.

Domestic halal stamps should be regulated and issued by one Government department, with one official halal logo. As is stands, any non-religious body, or enterprising businessman, can trademark a logo and set up shop, targeting everything a consumer will need to purchase.

According to AQIS, in the 2013/2014 financial year, Australia’s largest importers of Australian halal red meat based on value are Indonesia, Saudi Arabia, the United Arab Emirates, Indonesia, Malaysia, and Jordan.

Common sense dictates there be one Government certifying body, in line and in agreement with, our major Islamic trading partners. One officially recognised halal stamp!

This would instantly shut off halal funds arriving in terrorists’ bank accounts. And people like Mr Mouelhy could get himself a proper job, like cleaning toilets in C Block.

ISLAMIC COUNTRIES HAVE ONLY ONE HALAL AUTHORITY

KUWAIT – Ministry of Commerce and Industry, Public Authority of Industry

For export integrity, security and consumer confidence, a one-off fee should be paid to the Australian Government, by any exporter seeking halal certification, not the current annual royalties to dozens of private crooks.

Vegemite has had the same halal formula since 1922. Kraft isn’t about to change it to a haram (unlawful) formula. So if Kraft, Cadbury, Nestle et al, choose to remain halal certified, they should be paying a nominal fee to an Australian Government agency and they will comply with the required health standards as they already do.

The government (we, the Australian people) would benefit from the income, just as the Indonesian government has moved to do.

Consumer anger would be dissolved in an instant.

The consumer can confidently start buying their once-favourite Vegemite and Cadbury chocolates without wondering where their money is going to,

All red meat producers would be subject to random inspections as they are now from government meat inspectors. Pretty simple really.

Penalties for non-conforming would apply as normal under Section 18 of the Consumer Competition and Consumer Act 2010 as they do now. It’s a no brainer.

Each company who pays for halal certification must display the halal symbol clearly under newly proposed food labelling laws.

Currently, companies are removing or hiding the halal stamp to maintain their domestic market. Coon sliced cheese, for example, does not disclose the halal stamp outside its packaging, but on the inside wrapping of the cheese, hidden from the consumer.

This is clearly deceptive and misleading, exposing Coon to serious charges.

Halal butchers sourcing from halal abattoirs should not need to pay multiple times in an endless chain of extortionist rip-offs to the tune of hundreds of thousands of dollars all the way down the line to where the pensioner buys her snags.

A growing number of food producers are now reconsidering halal certification or have made board decisions to drop halal logos altogether when current certification expires.

“The risk isn’t worth the small ‘potential’ market gain”, one food executive told me.

Another said, “Look, we’re just average Australians too. We see what’s happening in the news. We’re no different to our customers. We don’t want to support something that makes us and our customers feel uncomfortable. Management has discussed all of this in a sensitive way.

"We also don’t know where the fees we pay go to. It’s not transparent enough for us. We’re following the whole halal certification debate in the news and online. We don’t want to be a part of it. You can quote me, but please leave our company name out of it.”

All producers, wholesalers and retailers I spoke to agreed halal certification would be better off in the hands of an existing government Agency covering food or health.

HARAM, NOT HALAL, LABELLING (my solution)

Almost all foods are already halal so how the hell does it make sense to label the thousands of various foods that ARE halal?

You see no-one, not even Mr Mouelhy, can make any money out of only one cookie that is labeled as marijuana-laced.

One stamp would instantly fix the problem and remove the existing graft and corruption. (end my solution)

If you are angered about being scammed by halal rip-offs and your grocery money going to proscribed terrorist groups, typing on facebook won’t be enough. Now we have made an impact… politicians are listening

If we let up now, so too will they.

Human Appeal International Islamic “charity” is an established conduit to financing terrorist groups. I was tipped off to this by members of the Muslim community themselves. Their accusations were found to be spot on, but they can’t speak out… we can.

[A huge thankyou to all who assisted in this series.]

Word and trivia champ for 2015

SLIPPERY DOES IT AGAIN!

Is the Prime Minister a crook? Part VII