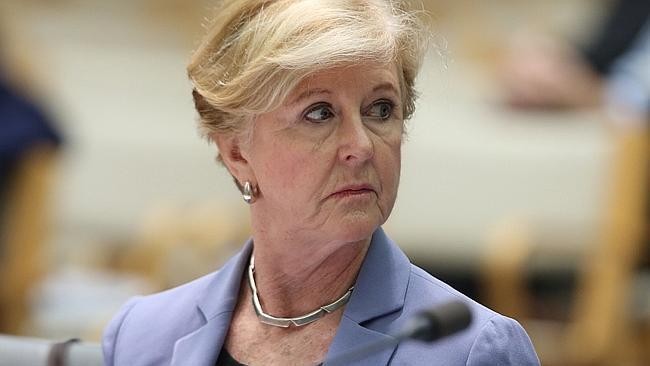 “I’m a lawyer”, she screeched when asked to withdraw a claim that there were armed guards at the children’s detention centre. She refused, and continued to make more ridiculous assertions that there wasn’t a blade of grass to be seen, that children were behind barbed wire, diseased, suicidal and Ill-cared for without decent medical facilities.

She attested that Children were having torchlights shone in their eyes at 11 o'clock each nite, reminiscent of Gitmo torture. The truth would have been that a carer was ensuring the children were safely tucked away for the night.

But this is Triggs at her best.

When her claims were utterly and conclusively discounted she retracted nothing, uttering, “Let’s move on then, shall we?”

Anyone can make a mistake but having recently visited the site Ms Triggs was knowingly telling bald-faced lies and was determined to mislead the Left Press who were eager to report her “opinions”, rather than the known facts as presented by Minister Scott Morrison.

So why would her Commission’s subsequent report, “The Forgotten Children” be any more honest than her other assertions?

Of course the timing of the report is designed to denigrate the Abbott Government. And today's successful censure motion on Attorney General, George Brandis, by the Left Senate nutters is designed to assist Triggs out of a hole she has dug for herself and at the same time embarrass the Government.

Here are the facts, backed by photographs, as supplied to me from someone who lives close to the detention centre:

“The conditions at Christmas Island under Morrison are first class and above anything available to residents on the island. Children have a fenced pool and access to swimming lessons, schooling, Tai Chi/Yoga, they participate in community sporting events, they have a Persian band, disco, movie nights, picnics and many other activities, all supervised.”

According to my Christmas Island contact, “They (the children) have the best of medical care and are immediately flown to the mainland if specialist care is needed, I wish we had the same services ourselves”, he said. “I find it most distressing that her (Triggs) professional ethics have resulted in the detainees being used as pawns for her political agenda.”

The reason numbers of children in detention have dropped from 2,000 under Labor to 136 now is simply because Morrison has stopped the damned boats!

The reason complete families have not been released is that it would encourage the existential tactic of using children to facilitate parental needs.

Today’s censure motion was carried by the votes of many who don’t know what really happened between Triggs and Brandis.

This is what actually happened: Triggs knew of the displeasure her report had caused within the Government. Abbott and Morrison were livid at the unabashed bias of the report and at Trigg’s admission she had colluded with Labor Ministers during the caretaker period of the last election as to when it would be electorally advantageous to conduct the inquiry.

Triggs was faced with the Government’s loss of confidence in her which would have made her position as President of the Commission intolerable and untenable. TRIGGS THEN RANG BRANDIS, to ask for a meeting.

Brandis then asked his Departmental Secretary, Chris Moraitis, to visit Triggs in Sydney to find out if she intended resigning or not.

[The Government can't sack triggs as she is a GG period appointment. The only way she can be decommissioned is if the Government denies all funding to the Commission, and they don't wish to do that.]

Triggs had enquired as to alternative employment (it was an international legal appointment) and I have it on good authority that she had been irate that the job offered paid nowhere near her current package of $500,000 pa.

She then basically told Moriatis in so many words, to get fornicated, saying she would hang on as President of the Commission for Human Rights, thank you very much.

Moriatis rang Brandis to say it was a no go.

Triggs rang Labor shadow Attorney General, Mark Dreyfus, to say she was the victim of a Brandis bribe to leave Office.

Penny Wong and other Senators were furious and demanded an explanation from Brandis for such a serious charge. While the truth of the matter was being debated in a Senate committee last week, Tony Abbott back in the House was soon busily fielding allegations from Mark Dreyfus who had foolishly referred the matter to the AFP.

Moriatis, a long-serving and highly respected Departmental Head, was challenged unconvincingly by Triggs as to the truth of what was said. Triggs was determined to make the Government suffer for casting a slur on her impartiality.

Knowing Triggs’s record of habitually lying, and her somewhat flawed character, I will stick with Moriatis’s version of events thankyou.

A WEALTH OF TALENT

Double dissolution off the agenda now