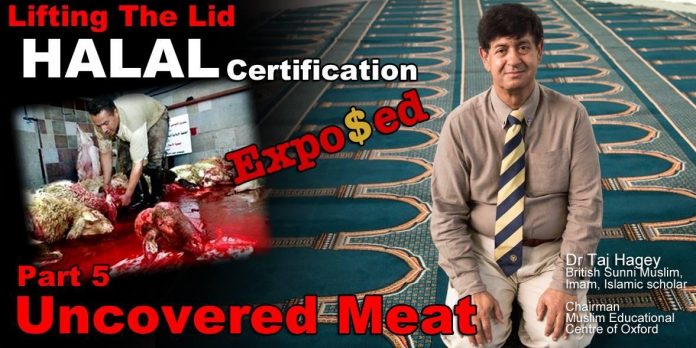 If we are to defeat and eradicate the ballooning number of halal certifiers who prey on our stupidity then our greatest allies will be Muslims themselves.

When I scratched the surface of this insidious practice it soon became clear the anger was not confined to we infidels but to a wide section of the Muslim community that included clerics and imams.

The war on halal certifying will be fought on two fronts. First, help to make all consumers aware of the fraud being perpetuated on them while on another front (the export front) animal welfare groups will expose the unacceptable, depraved cruelty involved in halal slaughter. It really should stop.

This barbaric process of killing animals cannot be entertained by any decent thinking person and it cannot be divorced from kosher practices either.

Food and religion are a dangerous mix. If food has a religious connotation for some then it should be confined to selective purchasing, it should not pervade entire economies as a hidden tax supporting that respective religion.

Later in the series there are some shocking revelations that unearth how receipts from halal certification find their way to terrorist organisations.

But as background, Part 5 here shows a Muslim academic’s distaste for what is happening with halal meat. If this halal certification rort is to be defeated we will need to engage with blokes like this.

Dr Taj Hagey is a British based Sunni Muslim, an Imam, Islamic scholar and educator. He is the Chairman of the Muslim Educational Centre of Oxford.

Last year he wrote an article for the British Daily Mail addressing misconceptions about halal meat. It underscores some of the deceptive practices in the marketing and promotion of halal.

Some may think I’m bludging by publishing his article in full as Part 5. That may be true, but his insight into the halal scam as an active Muslim is of more value than mine.

This is about the efficacy, or lack thereof, of halal certified meat.

Anyway, here it is, from the mouth of a Muslim:

When I walk into a restaurant, I’m usually a hungry customer. It should not be important to the waiter as to what my religion is.

I could be a Muslim, a Christian or a Jedi warrior. Whatever my beliefs, I have a right to enjoy my meal without any hidden agenda.

Pizza Express, one of Britain’s favourite food institutions, admitted this week that all the chicken it serves has been killed according to traditional halal methods. The blood was drained from the bird and prayers were recited during the slaughter.

Now it turns out that the meat in many supermarkets is also halal — though there is no recognisable label to indicate this fact to consumers.

This is covert religious extremism and creeping Islamic fundamentalism making its way into Britain by the back door. It is completely wrong that the food sensitivities of Britain’s Muslims — who amount to just 4.8 per cent of the population — should take precedence over the other 95 per cent.

Halal meat should never be forced on customers without their knowing, surreptitiously and using clandestine methods. It’s unfair to everyone, non-Muslims and Muslims alike. It’s deception on a grand scale for the former, while it could fuel bitter resentment against the latter.

Of course I understand that many of my fellow Muslims, who are moderates not militants, will feel strongly that they wish to eat meat that has been killed by customary halal methods — and they have a perfect right to do so.

But many misconceptions need to be clarified, because I am certain that most people don’t understand where these rules about food came from, and who benefits from them.

Furthermore, the idea that Muslims cannot eat non-halal food — food that is suitable for Christians — is completely wrong, and it has no theological basis in the Koran, the supreme text of Islam.

I’m a dedicated Muslim, a devout religionist, an imam and intellectual scholar of Islam, but I eat whatever food is placed before me, with the obvious exception of pork. If you’re kind enough to invite me to your home, I would eat whatever meat you chose to serve: turkey, lamb, chicken, beef … anything except pork.

This is perfectly permissible in Islam, and the crucial thing is that it doesn’t have to be halal meat. No one wants an imam to be quoting chapter and verse of the Koran over the turkey sandwiches, but it is important that everyone understands how clear cut the teaching is.

Chapter five, verse five of the Koran states: ‘This day all good things are made lawful for you. The food of the People of the Book [meaning the Jews and the Christians] is lawful for you, and your food is lawful for them …’

There are no ifs and buts about that. The Koran does expect us to be thankful for our food, however.

I teach in Oxford, and when I go to dining halls in the university, I eat what is available. I must say, I’m partial to a slice of steak.

At the point of consumption, before I put the food in my mouth, I give thanks, with a brief prayer that Muslims have been saying for more than 1,400 years.

I say: ‘In the name of God, the most Merciful, the most Gracious.’ Christian readers will recognise what I’m doing — it’s very similar to the concept of saying grace.

The Koran says we cannot eat slaughtered meat unless the name of God exclusively has been pronounced over it, and not in the name of any other deity or idol.

So, it does not really matter if, when that cow or lamb was slaughtered, the abattoir workers were saying prayers or playing heavy rock music at full blast on their radios. The individual prayer just prior to actual consumption makes the meat fit — halal — to eat.

But if the Koran does not insist on what have become the customary halal methods, why are they now so prevalent in Britain? One reason is that religious zealots and theological ideologues are deliberately promoting confusion about halal to sow discord and resentment.

Three of the main fundamentalist Muslim sects — the Wahhabi fanatics in Saudi Arabia, the Salafi extremists of the Muslim Brotherhood in Egypt, and the Deobandi zealots from India-Pakistan — are foisting their fabricated notions about it down our collective throats.

Muslim fundamentalists insist that the concept of halal meat does not come from the Koran itself — it derives from a secondary and often suspect source, called the Hadith.

The Hadith consists of the purported sayings of the Prophet Mohamed, compiled some 300 years after his death, and it is replete with gross contradictions and anti-Koranic statements.

We all know about Chinese whispers and how anything can be unintentionally distorted as it goes from mouth to mouth over generations. It’s inevitable that when words are transcribed into writings some 300 years later, all kinds of differences, deviations and embellishments arise.

It is the Hadith that insists that animals must be drained of blood while still alive, and the Hadith that suggests an animal cannot be stunned before slaughter. (The Hadith is also the source used by fundamentalists to justify the stoning of criminals and the use of full face veils for women.)

By contrast, the Koran — which Muslims believe is the unadulterated word of Allah — says we should be considerate of all of God’s creations. Any technology to alleviate an animal’s pain or needless suffering should naturally be used.

The Koran certainly says pork and carrion meat, such as road kill, cannot be eaten.

Blood is another prohibited food. That’s why it’s an oxymoron to talk about a halal haggis or a halal black pudding. And there is a Koranic commandment that the animal must be drained of blood — although nothing to say that this should be done while the poor beast is still living.

If you think about it, these rules were entirely practical health safeguards in the 7th century when the holy book was written. But the extremists’ insistence that animals today should be killed in exactly the way that they were back then isn’t just cruel and bizarre, it is grotesquely hypocritical.

They don’t use 7th-century technology themselves in their own lives. Fundamentalists are happy to cook their meat in a microwave and enjoy the comforts of modern life in the UK.

It will be hard but not impossible to reverse the current trend for halal meat, because it has become a huge, multi-billion pound business both here and abroad. From the slaughterers to the distributors to the butchers, everyone right along the food chain is exploiting the ignorance of the customer, both Muslim and non-Muslim.

In my hometown, Oxford, you can go to the local supermarket and pay perhaps £5.50 a kilo for lamb. But go to the halal shop and it’s £6.50 or £7 a kilo — even though, as we now know, the supermarket meat is probably halal too. That’s a big mark-up.

As a British Muslim — and I underline the word ‘British’ — I want to see full transparency when I go to the supermarket. I want to know the true provenance of the food I buy, and it’s essential that businesses start labelling food better and more accurately.

It is high time the white, liberal, Guardian-reading classes stopped behaving like apologists and woke up. There is a fundamentalist halal Trojan horse in our midst, and we must take corrective action.

Antiquated customs like the insistence exclusively on the Hadith version of halal meat only serve to entrench that fundamentalism.

They should be rooted out and consigned to the dustbin of history. They have no place in a modern British society where Muslims wish to be fully integrated as part of the UK mainstream.

NEXT: MONEY FOR NOTHING

DOES OSCAR HAVE A LEG TO STAND ON?