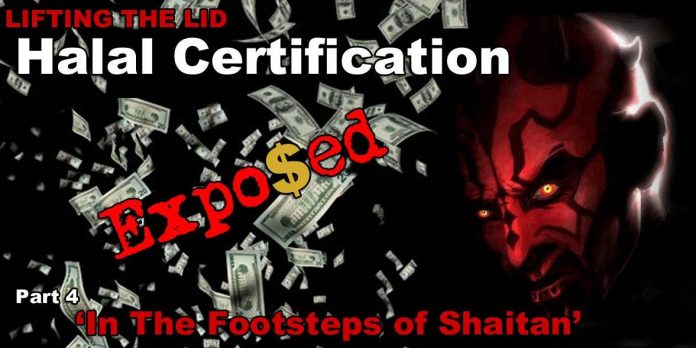 Islamic leaders are becoming louder in their criticism of halal certification, likening it to a Satan-inspired money grubbing scam that jettisons the Islamic faith. It has caused particular angst among Muslim elders in Africa, Indonesia, Australia and elsewhere.

The ‘Voice of Islam’ in Zimbabwe says in response to halal certification corruption allegations in Indonesia:

“This haram fraudulent ‘halal’ certificate racket is not confined to Indonesia. It is an endemic disease of corruption which exists also in South Africa and in all countries where the devil’s agents (the halal certifiers) pollute and bedevil the Muslim community.

“The haram shenanigans of this evil breed of Satan are no longer secrets. All of these ‘clerics’ have sold their soul for the sake of the haram boodle (improper money), to which they have become addicted.

“While they have made Muslims carrion addicts, they themselves have become haram boodle addicts. Every iota of fear for Allah has been expunged from their hearts.”

“No longer are they able to distinguish between halal and haram. This does not concern them. As long as the boodle arrives, it matters not how or from where.”

“Having lost every vestige of inhibition over haram, the ignoramuses in the community consume even pork labelled as ‘halal’. In fact, they will gobble up even faeces if beautifully packed and adorned with a ‘halal’ logo.”

Imam Habib Bewley from Capetown, South Africa, expresses the view of many Muslims:

“We have all been shocked by recent developments in the news concerning the abuse of halal certification and the fraudulent labelling of pork products as halal by certain unscrupulous persons.

“But it is important that we do not let the details of the case at hand, or the particulars of the parties involved, distract us from the essence of the matter, from the true problem with which we are confronted… halal certification itself.”

Habib Bewley continued, “And from humble beginnings, the halal stamp or halal certificate has become big, big business and it has developed into its own industry, an industry according to the International Market Bureau of Canada, that is worth billions every year, and brings in tens of millions of rand into the coffers of the organisations who are in charge of doing it here in South Africa.”

These statements are indicative of the wave of Islamic objections to the halal scam. The anger leveled at the certifiers by clerics is hostile and with good reason… note just one of these SA certifying organisations that states on its website:

“Only halal food and beverages approved by us are to be served, sold, stored and or processed on the approved premises. In the event of private purchases by stores, this will be permitted only from suppliers who have been explicitly approved by us.”

These bastards are expressly forbidding businesses, shops and restaurants from purchasing goods from sources other than those they approve of. And, by extension, they have declared all non-approved goods as forbidden haram. In other words they are doing exactly what their Allah commands them not to do.

Allah says, “Do not make haram the good things Allah has made halal for you.”

The Prophet Mohammed himself ate the meat of the Jews without questioning them as to how they slaughtered it. But the Prophet at that time had not yet figured out how the halal scam works.

In Islam there is no equivalent of a Christian pope or any single “infallible” leader who can decree an inviolable law.

Any Muslim can declare himself a leader and interpret the Qu’ran to his liking.

A different interpretation by the more powerful leader demands the killing of followers of the lesser leader. And that is why in Islam there are so many who aspire to leadership and why Islam remains in such disintegrated chaos.

Imams and Muftis are simply people to whom (they say) Allah has granted knowledge of His rulings. It is their duty to freely transmit that knowledge to other Muslims, and not allow it to be withheld and sold to the highest bidder.

As one Muslim cleric put it: “They cannot sell rulings because they are not theirs to sell, they are Allah’s. And thus they cannot charge people a premium for ruling their products to be halal.

"By doing so, they are doing exactly what Allah criticised the rabbis of the Jewish faith for doing, when He said: ‘Do not sell My signs for a paltry price’.”

It is totally reprehensible to make a profit from the selective issuing of privately perceived rulings of the Prophet. And the fact that such exorbitant fees are charged for halal “services” puts average Muslims at a distinct financial disadvantage in the market place because the price the companies have to pay is passed directly to the consumer.

Food carrying the halal logo almost always tends to be more expensive than that without it.

Halal certification has become a form of tax fraud, taking money from the pockets of ordinary Muslims and non-Muslims and putting it into the coffers of the halal certifying bandits.

Many small Muslim businesses also have suffered financially as a result of halal certification: Before the halal stamp became widespread, almost all Muslims used to purchase their meat from their local unaccredited butcher who knew his meat was halal but could never afford the certification fees.

But, since the advent of the halal logo, non-Muslim businesses have stolen the majority of those butchers' customers by paying the certification fees, displaying the logo and cornering the Muslim market forcing the already halal butcher out of business.

And those few halal shops and restaurants that remain are greeted with suspicion because of their lack of certification.

No longer is a Muslim cleric’s word taken at face value that food is halal. As a consequence of this, Muslims are now asked to trust a logo more than the word of an Imam or Mufti.

Is it now becoming clearer why the average Muslim hates the halal certifying fraud? It has certainly been a revelation to me!

When the Prophet Mohammed was given that sheep to eat by a Jewess of the Khaybar tribe after he had defeated them, he did not ask where the meat had come from or how it was slaughtered.

He would have eaten it were it not for the fact that the meat itself had “told him” it was poisoned.

There is justifiable suspicion that the halal logo itself is fraudulent as it is often forged and transferred from one product to another without the consumer’s knowledge. Companies who buy these logos are solely interested in the bottom line – halal legitimacy is not a factor.

Indeed, it might be said that the existence of halal stamps has caused Muslims to consume a lot more haram food than they would have otherwise.

Islam has its basis in fraud. Today, Muslim scholars will agree to speak out in favour of Shariah banking in return for a well-paid seat on the bank’s board. (Follow the Bendigo Bank saga.)

Muslim societies of the past were well aware of these dangers and used to guard against the corruption of their scholars by paying them huge salaries so that they would not feel the need to accept bribes.

And no matter how Allah-fearing the current crop of Muslim clerics may be, the system they have allowed to evolve has opened the door for a rash of unprincipled individuals.

The dash for Allah’s tax is now becoming ludicrous as halal logos are being bought and affixed to products such as water, tooth picks and black pepper.

Satanic influence has clouded the original intent of halal and it has become a bastardised extortion racket without any allusion whatsoever to the teachings of Islam.

It has attracted the worst of opportunistic Muslims who are happy to disadvantage their own kind.

But Islam itself is perhaps most to blame because it is headless and fractured, there is no definable leader who can sit in judgment on Muslims as a whole.

There is no over-riding body to decide who should be excommunicated as a result of evil-doing or sacrilege against Allah.

For Islam there is only one symbol of law and it’s embedded in its own insignia… the sword.

WOMEN WANT TO PLAY WITH MEN!