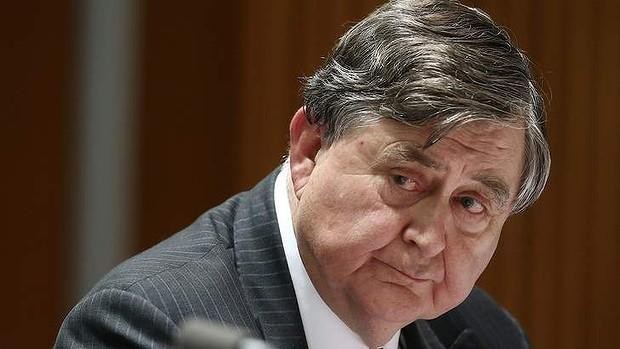 One night in March of 1973, and unbeknown to PM Gough Whitlam, Attorney General, Senator Lionel Murphy QC, with a squad of Federal Police raided the offices of ASIO in Canberra and on St Kilda Rd, Melbourne.

I sat stunned in my Canberra Times’ office, and reached for a phone to call super sleuth journo Alan Reid, …surely he would know what the hell was going on. He didn’t, well not right then he didn’t, no-one did.

It turned out that Murphy was after his own file.

ASIO Chief, Peter Barbour, had let them in and opened the safe that held the file incriminating Murphy with, among other things, a 'close association' with the Soviet spy Ivan Skripov, who had been deported in 1963.
.
Murphy had been a suspected KGB ‘sleeper’. He was active in Communist cells within the ALP. As Attorney General he had issued strict instructions to ASIO demanding that it no longer target student groups and peace organisations and that it stop bugging certain Canberra embassies including the Soviet Embassy.

Very few people knew the real Murphy, at the time only his close ALP friends knew of his first wife, a girl called Nina who was born in the town of Chita in the Siberian East of the USSR. Nina was the daughter of White Russian parents who emigrated from Vladivostock to Australia in 1925.

She had met Lionel while at Sydney University and it was believed that both had been working as Soviet operatives.

But ASIO had another interest in Murphy, a person called Junie Morosi. Morosi was bonking both Murphy and hard-line Communist and Trade Minister, Jim Cairns. Morosi’s dalliances with Tom Uren and other Ministers were a poorly kept secret.

The following year Jim Cairns was promoted to Deputy Prime Minister by Whitlam and ASIO became even more concerned that Morosi was now a serious security risk.

The far Left of the ALP was always unelectable but they used electable cleanskins like Whitlam to gain government. They used Kevin Rudd 35 years later in the same way.

Whitlam did not last a full term (he struggled through two half-terms) before his incompetent, Soviet-sympathetic, Cabinet rabble crumbled and passed on prematurely, including Murphy and drug honcho Grassby. Many escaped what should have been certain jail terms.

On December 14, 1984, the DPP had finally decided to charge Murphy with attempting to pervert the course of justice. Murphy was convicted in July of 1985 and sentenced to 18 months in jail. He was acquitted 11 months later suffering from terminal cancer.

It is claimed Murphy had no legal authority to seize ASIO files. The Labor Party believed ASIO was a law unto itself, even though the organisation never had the extensive powers and massive budgets it has today. (Since 2001 ASIO’s budget has increased 500 per cent with Abbott throwing another $630 million at it only last week.)

Sorry, I got a little carried away with that preamble but, since 1973, the Murphy affair has served to beg the question: Should the executive arm of government reign superior over a nation’s security and intelligence agencies?

At the time, ASIO’s Peter Barbour could have refused Murphy entry to ASIO offices and asked the High Court to sort it out, despite the fact that Murphy as Attorney General held the highest judicial post in the land.

J Edgar Hoover kept files on all US politicians, but he was smart enough to let each politician know he held damning information on their private lives, thereby ensuring his own longevity in office. Hoover was untouchable, and he only headed up the FBI, not the CIA.

So, what’s it to be? If members of Whitlam’s Cabinet were working against Australia’s interest in a cold war environment, who then holds the ascendancy? An elected Attorney General, or the Chief of ASIO who holds explosive files on him and others? It may never be tested.

So we come to the current ASIO Chief, the rather openly self-opinionated David Irvine (pictured). Irvine is an unusually noisy career diplomat and academic. He has enjoyed breaking the tradition of ASIO silence and comparative anonymity.

It’s more than a little disconcerting that Irvine claims Islam as, “…one of the world’s great and enriching religions.” He has also loudly praised our successful multiculturalism and the efforts of leaders in the Muslim community in helping counter terrorism and has roundly criticised “Right wing nutters” as un-Australian for suggesting that immigration from Islamic countries be limited.

But Mr Irvine doesn’t stop there; he suggests that, “some of those home-grown Muslims who travel over to Islamic hotspots, may not have gone with extremist intentions but were motivated instead by a wish to help other Muslims or live what they believe to be a truly Islamic lifestyle”.

WTF? Can you run that by me again Mr Irvine, sir!

Perhaps Irvine, as ASIO Chief, should be aware of those Australians who trained with Al Queda in Afghanistan and Pakistan in the 1990s and 2000s. Almost all returned to Australia and subsequently became involved in some form of terrorist-related activity.

Around a third of them were arrested and/or convicted of terrorism offences. Two thirds remain free to continue their studies in the virtues of radical Islam.

Mr Irvine described his attitude to terrorism in a recent public address as this: “After five years in the job, my advice remains that the Australian public should not become paranoid and jump at the shadows of immediate, impending or inevitable catastrophe.

“The threat of terrorism will be with us for some time but it must not be allowed to dominate our lives. We should maintain our awareness, use the anti-terrorist hotline if necessary and, above all, place our trust in Australian governments to be vigilant on our behalf.”

Irvine continued, “Our efforts are designed to protect both Muslim Australians and non-Muslim Australians alike. It was for this reason that I was upset by the headline in ‘The Australian’, it read: ‘We’ll fight Islam for 100 years’. Let me reiterate, we are not fighting Islam, in Australia or anywhere else.

“We will continue to work with the community of Muslim Australians, whom it is our duty to protect in exactly the same way as we seek to protect all other Australians.” Hmmm, is he fair dinkum or is he under the spell of 18C?.

Irvine, a close friend and appointee of Kevin Rudd, is a living example of why politically partisan appointments to the upper echelons of our Security Agencies should never happen.

ASIO itself should be keeping a file on its chief spook Irvine, the man is a dangerous idiot of radical Green proportions with exceptional powers and too many buckets of unaccountable brass to play with.

He refuses to keep his head down, loves selfies and the sound of his own voice, as does his mate Kevin, and espouses the ridiculous notion that Islam should be of no concern, is not a threat, and is one of the world’s “great and enriching religions” and that we should all take a chill pill.

Well, it’s probably a good thing that this Rudd remnant is to be replaced in two weeks’ time, albeit with another diplomat, Duncan Lewis.

The career diplomats I have known were mostly intelligence deprived and had filled cushy appointments used by political parties to shuffle their mugs sideways into never ending, harmless cocktail circuits.

In this climate of Islamic extremism Abbott should look further afield than the diplomatic circuit for his chief spook.

After all, ASIO will already have files on many in the Labor Party and certainly on treasonous Greens like Lee Rhiannon and dangerous fools like Sarah Hanson-Young.

So, should have Barbour told Murphy to piss off all those years ago?

Yes he should have because the radical Left, those who seek to destroy Australia, will always find a way into our governments.

And all that stands between us and our security is our chief spook.