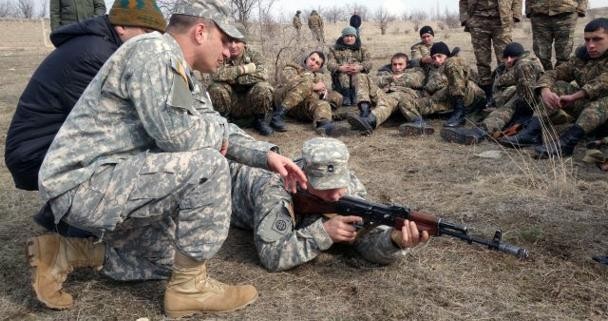 While the Arab League is preoccupied over whether Julie Bishop will refer to East Jerusalem as Occupied (noun) or occupied (adjective) the terrorists storm on their killing spree south to Baghdad.

Iran, who now wants to be America’s new best friend and get involved in defeating the ISIS, should be ignored, it has other plans for its old Iraqi enemies and their oil fields.

It was Putin who tried to stem the ISIS onslaught by arming Syria’s Bashar Assad while Obama was busily supplying arms and training to the ISIS via the CIA.

The world’s “policeman” has been in league with the crooks.

According Jordanian officials the U.S., Jordan and Turkey have been training ISIS terrorists since 2012 at a secret base in Jordan near the town of Safawi in the country’s northern desert region.

Obama’s dilemma is that he needs to kill them or face a new terrorist mega State within new borders that used to be called Iraq.

The U.S.-imposed corrupt Shi’ite Government of Maliki and his makeshift army, have shown predictable cowardice under fire when facing those American trained terrorists who have now decided to march on Baghdad.

Islamic terrorists aren't known for their bravery unless the foe is unarmed.

But why should that be a surprise? After all, those same Iraqis dropped their guns and fled when they were confronted attempting to invade Kuwait!

It seems everything Obama touches in the middle East turns to camel shit.

In March this year, the German weekly, ‘Der Spiegel’, reported the Americans were training Syrian insurgents in two camps to the South of Jordan. Britain’s ‘The Guardian’ also reported the same information.

The U.S. Defense Department has since declined to comment on those reports. Hmmm.

A gob-smacking scenario is now unfolding where Kurds, Shias, Sunnis, Iranians and possibly Turks all want to be new best friends with each other to defeat the U.S.-trained and armed extreme Sharia terrorists who are financed by Obama’s old best friends the Saudis.

And America’s old best enemy, Assad, might even join the fray to make a few bombing runs on the same insurgents who were trying to take his Damascus…. work that one out if you can.

While Obama is hoping he hasn’t trained his ISIS insurgents too well, and ruminates over his non-existent intel, his commanders try to work out what the hell to do because the enemy (if you can figure out who that is) is advancing on Baghdad with its hundreds of Australian Islamic conscripts.

(All masked of course because they are committing, and intend to continue to commit, war crimes.)

It’s the Islamic madness of Middle East tribal politics we will never understand and should never have been involved in.

Phew, at least Australia’s Foreign Affairs Dept is doing its bit to quell the Middle East firestorm… it is round-tabling the Arab League’s 20 Ambassadors in Canberra to thrash out an agreement on whether “occupied” should be with a small “o” or a big “O”.

Bloody hell, give me a break!

THERE’S NO RABBIT IN THAT HAT MR ABBOTT