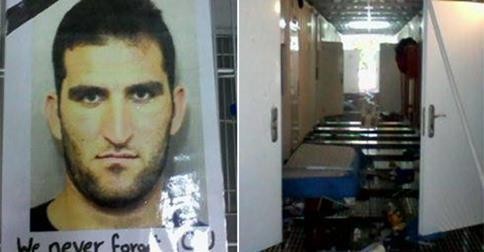 The reason i am messaging you is in relation to the riots on Manus Islands.

Your article about Berati was spot on. Im going to list in point form a few things about the day the rioting happened.

* Berati was the main instigator
* Illegals from iran make up about 90% of the detainees there and stick together. This means they can bully, rape and attack the smaller groups within the camp.
* Berati was caught on a number of occasions raping and abusing boys and men within the camp.
* Berati and his gang of thugs would always antagonise the local guards and police.
* On the day of the riot the mob had amassed in the yard and were giving it to the locals & guards.
* One of the detainees mooned a local police officer through the fence and was shot in the Arse.
* Once the mob started throwing condoms at the guards and police, all hell broke loose.
*All non local staff were evacuated from the camp as it is against the law for them to get physical with the detainees.
*The fence was knocked down and the local guards and police charged the compound. Uniforms were handed out to locals to join in the melee. Basically if you were black you got a shirt and were told to run in and fight.
* Berati was targeted. They spotted him and went after him. He was never getting out alive, much to the relief of the locals and the detainees that had been raped by the scumbag.
* There was another instigator i'm unsure what his name was, but he was a Midget from Iran. When the locals caught him, they held him up like a trophy and paraded him around the yard.

That is the bulk of exciting stuff that happened during the riots.

Some other interesting points from inside the camps:

* Everyone has internet access and uses facebook.
* They join groups that have been set up by greenies and do gooders.
* On many occasions these greenies have been feeding the detainees information about what to do and how to get resettles in Aus.
* More than once people have posted instructions to burn the camps down, and that if there are no camps then they will have to be resettled in Aus.
* No one actually goes on Hunger strike, its all a big show. One overweight inmate went on hunger strike but actually put on weight. His mates were sneaking him food from the mess hall.
* If a detainee decides to go back home. We send them back with $2-3k american for their troubles.
* Many of the boats that did come started off with women and children as well as men. They arrived in Aus with just Men on board. Apparently the women and children were raped, killed and thrown overboard. Common Occurrance.

I hope this has been enlightening, i'm sure you already knew most of this. Have a great day and keep up the good work.