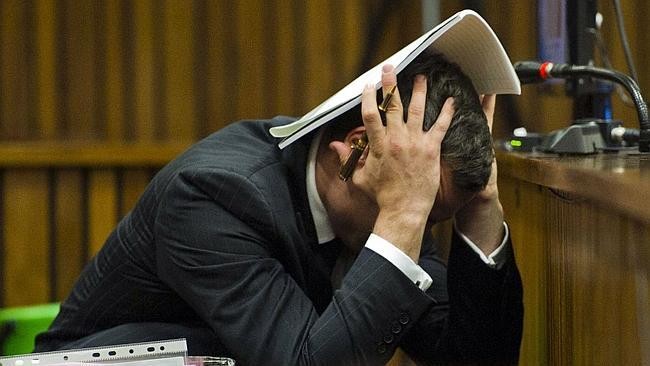 There is no doubt Oscar Pistorius will be found guilty. Guilty of what, is the only matter yet to be resolved.

Sometimes the obvious is lost in a point-scoring fracas over forensics when it doesn’t really matter if Pistorius bashed down the toilet door with a cricket bat, a prosthetic leg or a saucepan.

I have watched the case with discomfit, witnessing $10,000-a-day counsel egos override the accused’s fate. There are only two possibilities:

1. Oscar Pistorius got out of bed believing an intruder had entered the house via the ensuite toilet window, he screamed at his girlfriend Reeva Steenkamp (who he thought was still in bed) to call the Police. Standing on his stumps he shot four times through the toilet door intending to either disable or kill the “intruder”. He then realised it might well be Reeva in the toilet. Unfortunately it was, and he had killed her. Or,

2. He had had a violent argument with Reeva (as neighbours attest to) and she had locked herself in the toilet to escape his rage. He then proceeded to shoot her through the toilet door.

In order to entertain the first option it’s important understand South Africa. There are 40,000 murders a year in this violent country where sophisticated whites co-exist with four times as many blacks, coloureds and others.

Every white person carries a hand gun like we would carry an Iphone. They need to. I considered myself lucky if my house was broken into only weekly.

When that does happen, it’s best to let the intruder take what little you have left for them and wait until they leave. Sometimes they’re happy with a loaf of bread.

When you park your car you must always place anything of value, including the tape deck and car radio, in the boot. Otherwise your car windows will be smashed. You must never wear jewellery unaccompanied and you learn to live with the constant threat.

Pistorius slept next to his girlfriend without his prosthetic legs and would have felt extremely vulnerable confronting an intruder, yet he chose to.

So did Pistorius have a violent temper? Under five days of relentless cross examination by a prosecution counsel determined to expose a violent side, Pistorius did not fly off the handle once, he instead broke down in tears.

It was Prosecutor Gerrie Nel himself who showed extreme frustration that he couldn’t crack the accused. He was often pulled up by M’Lady for being overly aggressive and inflammatory. (Guilty or not, I would have dropped the goading little bastard where he stood.)

Maybe Reeva had simply gone to the toilet in the dead of night, as she must have done many times before. But this time she had locked the toilet door. Why would she do that unless she was escaping from something?

Pistorius fired four times. The bullets went through the door at waist height toward the toilet and in a downward trajectory.

Did Pistorius believe an intruder had climbed a ladder to the toilet window and clambered inside just to have a crap? If not, why did Pistorius fire at someone he believed was seated?

And if Reeva was sitting on the toilet in the dead of night having a quiet pee how does that possibly equate to escaping the alleged rage of Pistorius?

Reeva was shot in the arm, hand, hip and head. (He didn’t shoot at her head, she had already fallen, or was falling, to the floor.) Yet the defence claims Reeva was opening the door and Pistorius thought this “intruder” was about to confront him.

If he believed it was an intruder about to emerge from the toilet, why not fire at chest level rather than at the toilet bowl. Hmmmm.

On the “balance of probabilities”, Pistorius is guilty of first degree murder. But “beyond all reasonable doubt” is another matter and that’s what the prosecution cannot prove.

Most Western commentators, who have no understanding of South Africa, have already condemned Pistorius, but there is sufficient doubt enabling him to escape murder one… only those who weren’t there can try to prove he meant to kill Reeva.

Pistorius will be found guilty of culpable homicide (in our terms, manslaughter). You cannot shoot an “intruder” unless you can prove you are in imminent danger and the defence has not been able to do that.

The judge will opt for the easy verdict of culpable homicide and a short jail sentence.

I guess the lesson is if you want to shoot an intruder, first make sure your partner isn’t having a pee.