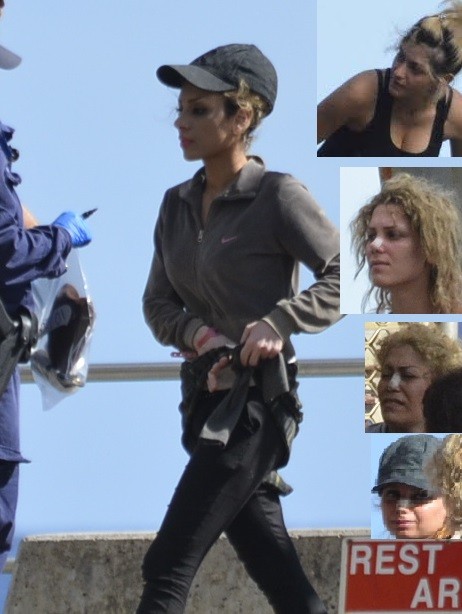 A Christmas Island resident has expressed disgust to The Pickering Post at how Salvation Army employees, supported by Iranian and Afghani interpreters, have been instructing arrivals on how to cheat the system.

“It’s beyond belief how we are paying them to actually coach the illegal arrivals to circumvent Australian regulations”, he said.

The Left wing Guardian On-line has dishonestly reported how distressed Iranian “asylum seekers” had made the journey without sanitation and arrived covered in faeces.

“That’s simply not true said the resident”, who asked not to be named. “I’ve seen every boat arrive here and it seemed like most had been shopping at Harrods.

“Many women had bandages on their noses (see pics supplied) which we later found to have been nose jobs undergone en route in Malaysia. Some women had recent breast augmentations and had demanded mirrors so they could see how they looked.”

Since that report, the Government has cancelled The Salvation Army contract.

Illegal arrivals are being convinced to convert to Christianity (or at least to say they have) because the chances of being sent back home are far less if they can claim religious persecution.

Interpreters on Christmas Island are also telling women that their chances of getting to the Australian mainland are greater if they get pregnant.

It was also exclusively reported here last week that tenders have been secretly called for a new processing facility in The Solomons, so it was no surprise that Julie Bishop and Tanya Plibersek were later reported to have visited Honiara.

“It’s a bloody joke”, said the Christmas Island informant. “This lot didn’t like the bloody toothpaste so a whole pallet load of Colgate was dumped in landfill and a new pallet of the preferred Macleans was flown in from Perth.

“They didn’t fancy cricket as a sport either (they had permission to use the local residents’ cricket ground) so they demanded hockey sticks. Canberra agreed and quickly despatched 40 hockey sticks.

"The trouble was that they were ice hockey sticks complete with a box of pucks.”

What is disturbing is that Green activists, operating as “Pink Salvos”, have undermined the good work the Salvos were doing. As a result they have suffered ignominious reputational damage and have been told their services are no longer required.

Minister Scott Morrison’s Office was not available for comment. (It is Sunday I guess.)

But most disturbing are the thousands of genuinely destitute refugees whose places are being taken by queue-jumping, well-heeled, illegal immigrants who are chauffeured around Jakarta airport duty-free shops before being escorted to smugglers’ boats, sans life jackets.

The loopy Greens, Gillard and Rudd have much to answer for because the illegal immigrant route is now well known throughout the world.

HALAL IS MUCH MORE FUN

Greste in for the long haul