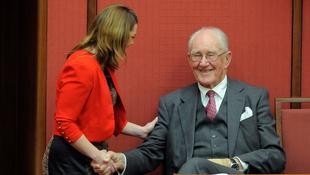 Fraser explained today that Senator Hanson-Young had for a long time ''been a voice of sanity and common sense in relation to asylum seekers in the Senate''.

Golly, Fraser was once a good friend, always slightly odd, but this takes oddness to new heights. “Did you really say, ‘some 90 per cent of asylum claims were found to be valid’, Mal?

“Crumbs mate, I know that Fairfax newspapers and the ABC are saying that, but really, you have to stop following that nonsense.

“Now look, I’m going to sit you down, wipe your chin, make you a cup of tea, straighten your blanky and explain exactly what an asylum seeker is and why Fairfax and the ABC are wrong, ok?

“These boat people are certainly not asylum seekers and if you had done the research I have, you would have come to the same conclusion that Bob Carr has finally come to.

“The ‘90 per cent’ you refer to are those who have been rejected as asylum seekers by our security staff and have successfully applied to our appeals tribunal using the free services of Labor law firms.

“Of course the appellant process is free to the illegal immigrants but not to we taxpayers because the Government wears the cost of legal aid. Seven and a half million bucks worth, so far.

“Now, stay with me here Mal. You see, our security staff goes to great lengths to sift out the dodgy bastards but they got tired of ‘90 per cent’ of their good work being overturned and unchallenged on appeal by Labor lawyers.

“So now they just wave the lot through because they can’t afford the time to prepare a case in the Tribunal for each of the thousands of appellants who get a free run by soft Left magistrate appointees.

“We simply don’t have thousands of prosecutors to act for our security forces in individual cases.

“Do you understand, Mal? No-one is being processed now, they haven’t been since last August. That’s why we get convicted terrorists living in the Adelaide hills and thousands more living unprocessed in our suburbs. No-one has a clue who they are or where they are living.

“I’ll reheat that hot water bottle and fetch you a Vincents, Mal. You don’t look too good.

“You see Mal, that’s why the border excision bill was introduced, to avoid illegal immigrants having access to our court system which has successfully negated our security system.

“But guess where that bill is now, Mal? Yep, held up in the Senate by your new best friend, Sarah Hanson-Young.

“Never mind ol’ mate, I suppose I’ll contract alzheimer’s or dementia one day too. I’ll get your walking frame and we’ll go for a toddle in the garden.

“Are you still growing those gorgeous Garnette roses, Mal?”