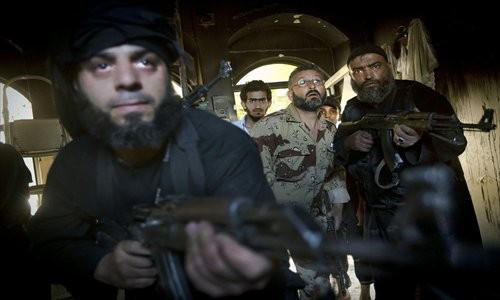 Obama and UK's Cameron are preparing to arm rebels in Syria amid claims of chemical weapons being used by the Assad regime.

Interfering in other countries’ civil wars has only produced life-costly disasters and makes no more sense than if the Arab world had interfered in the US civil war.

The West is a slow leaner.

While Iraqi civilians pray to Allah for another Saddam Hussein strongman to quell worsening tribal unrest, Obama is now planning to rid the Arab world of Syria’s strongman, Bashar al-Assad.

Libya’s strongman, Muammar Gaddafi, was brutally murdered at the behest of the West and a UN endorsed, and NATO activated, “No Fly Zone” yet the jihadist rebels it assisted promptly murdered four US diplomats in Benghazi.

Do we really believe those we try to assist like us?

Afghanistan’s Taliban is now emboldened, more active, and producing more opium, than when we went there to destroy it.

The West gave comfort to Egypt’s Arab spring offensive only to see the Muslim Brotherhood take over. The “Brotherhood” was the creator of the terrorist organisation Hamas and has been linked to many political assassinations.

The Brotherhood gains broad acceptance by assisting the poor in the same way as did Chicago’s Al Capone and Colombia’s Pablo Escobar. It's a common tactic.

Obama realises the rebellious movement in Syria is backed by Al Queda which is attracted to any form of rebellion in the Middle East.

But, he says, we will only arm those who are not Al Queda.

“Hands up all those who have Al Queda links! Okay, now you guys aren’t allowed to shoot these weapons we give you. Promise?”
Crumbs are Western leaders really that stupid? Yep!

Syria’s Assad is militarily backed by Russia and Iran. Increased assistance from both is certain if rebels are armed by the West.

All instances of interference by the West have left gaping holes for Al Queda jihadists to fill, and we eventually pay in civilian lives.

Australia is finally learning what Europe has already learnt: Islam, in all its forms, is an ideological rabble of tribal bastardry and it is impossible to placate it or confront it

We should leave it to its own decadent devices… certainly not import it by picking sides in its wars.

SUNDAY AT THE LODGE

THE ISLAMIC REPUBLIC OF ANTARCTICA