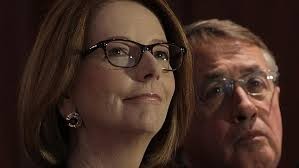 Government tax revenue has steadily risen over the past five years and is expected to reach $340 billion in the current financial year.

Yet economists now expect a deficit of somewhere between $10 billion and $20 billion.

But economists aren’t exactly the right people to ask… especially if they work in Treasury.

It’s a race between the Dept of Climate Change and Treasury to see who can be the more inaccurate.

Last financial year’s total tax revenue was $317 billion. So the Government is able to waste $23 billion more this year than last year, and that’s just tax revenue in an economy with a GDP of $1.5 trillion.

The bald fact is that tax revenue alone has risen by more than $100 billion since the Kevin 07 misadventure.

So, how can Swan, Gillard and Wong stand there with straight faces and tell us Government revenue is down when it is vacuum-cleaning us out of ever-increasing billions.

If spin is excluded, the trio is actually saying that its “expected” revenue is half what they forecast.

That means Treasury forecasts, under Government pressure, were constructed around Gillard affording her grand social experiments.

Unfortunately, her daily billion dollar “initiatives” had a day of reckoning and that day was yesterday.

Now that reality has finally set in, we are being told we need to pay dearly for Gillard’s stupidity. Serious backflipping is underway.

If Gillard’s executive branch was a corporate board of a public company (which it effectively is) shareholders would have sacked every board member, ASIC, ACC and ACCC would be laying charges, ASADA would be probing what drugs they were all on and the CEO would be under investigation by a major fraud squad.

Oh shit, I forgot about that!

Maybe this ‘Alice in Wonderland’ farce isn’t a crazy dream after all.

WE NEED TO GET MORE AUSSIE WOMEN PREGNANT