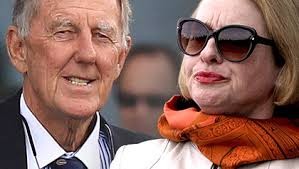 The Gai/Singo alliance was a marriage made in heaven until the grubby game of big-time bookmaking re-entered the Waterhouse family. It then became a dirty divorce waiting to happen.

Why would anyone place their horses with a leading trainer whose son and husband are bookmakers you ask, isn’t that a recipe for rorting?

Singo would, because loyalty should mean something.

Singo and Gai’s successful tryst goes back to when Gai’s son Tom was in nappies but lately the tryst has shown signs of infidelity.

The nappies now stink and the long lineage of Waterhouse blood is proving thicker than Singo's water.

Unpaid debts were taken to graves in unfinished business, but the dynasty is determined to live on.

Ok, so let’s say mum Gai has two horses in the one race, one is Singo’s. Now son Tom the bookmaker could clean up if he knew one of the two couldn’t win.

Is he in a position to know such sensitive information? Not from his mother he’s not! That would be highly unethical.

But, hang on, Tom grew up in those stables as an anklebiter helping to mix feeds. He carried buckets and brooms for stable foremen and strappers.

Tom could have eventually been assistant trainer to his mum. But Tom was born to much better things like expensive suits, fast cars, notoriety and the smell of money and what better connections could a prospective bookmaker have?

A casual phone call to a former stable mentor on an ostensibly unrelated matter could lead anywhere. “Is the vet happy with that suspect stifle, I know mum was a bit worried about that?” The possibilities for inside information are endless and apparently innocent.

This crazy Waterhouse arrangement would never be permitted in other Asian racing clubs but it’s permitted here! Crumbs! Aren’t the other Asians supposed to be the corrupt ones?

When racing spivs and union crooks like Big Bill Ludwig can get themselves elected to racing club boards and when those boards promote puppets like steward Murrihy and crooks like steward Schreck, it augers poorly for integrity in racing.

It’s only a matter of time before this hopeless conflict of interest is legally challenged. Don't expect the clubs to act.

Singo has seen the light. He and Gai will remain friends but his horses will remain elsewhere as long as her husband Robbie and her son Tom remain bookmakers with an attachment to the Waterhouse stable.

Media tongue-tied over Muslim treatment of our livestock