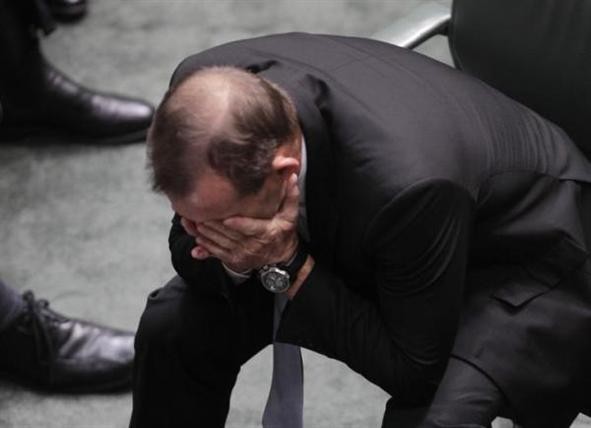 Tony Abbott is starting to backtrack on carbon tax abolition. In reality he always had to do that. When Gillard said it was designed so Abbott could not unravel it, for once she was sort of telling the truth.

Maybe Abbott has finally discovered his serious carbon tax problem, and it’s this:

The destructive, pointless tax is currently raising around $7.5 billion per year and has partly financed some of Julia’s massive bucket list.

Abbott’s abolition of the tax will certainly ease power costs and will assist many industries including airlines, agriculture, road transport and manufacture.

But Tony won’t get his hands on those savings and if history is any guide those industries won’t be falling over themselves to hand it back to consumers either.

But Julia can use that revenue for her election promises (she already has) and she can count on legitimate carbon tax engendered forward estimates.

And that’s not Abbott’s biggest problem because carbon is currently priced at an unrealistic $23 a tonne compared to a sinking European price of $4.

Abbott’s nasty little nightmare is that Australia, under the current pricing regime, will adopt a floating (market) price of what could be $3 (or less) in 2015/16.

So, whatever Abbott retains of the carbon tax now, it will be worth a mere fraction of what Gillard can say is all hers now.

In three years’ time Abbott will be seeking re-election with the tax producing absolutely bugger all and Labor’s promises predicated on its reinstatement!

In effect Abbott will be fighting this election and the next without any anticipated carbon tax revenue.

It will be one hell of a disadvantage and Gillard is set to make him feel some serious pain over it. That’s the way it was designed.

What a wonderful little scheme the far Left has dreamt up.

And all without one degree change in the temperature and without one millimetre difference in sea levels.

A remarkable effort!
Just as well Tony has a few points in the polls to play with.