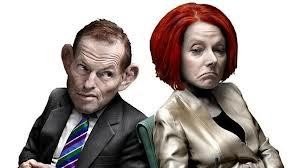 The reason for Gillard’s bastardry wasn’t that sitting ALP Senate Member Crossin was a Rudd supporter, there are many Rudd supporters on her front bench.

And it wasn’t that her NT vote might be recovered. In fact, trashing the Party’s pre-selection process will inflame further indigenous discontent.

For Gillard, there was a much simpler reason and Gillard has always thought in simple terms.

It was spent poison-penning her "to do" list for this year’s election.

Near the top of the list was to negate Abbott’s kudos he has acquired doing the good work he has always done for Aboriginal communities and regardless, the Coalition has conspicuously led the way in indigenous representation in Parliament anyway.

Abbott’s selfless time spent in Cape York, until his fire crew needed him down south, irks Gillard to distraction.

Gillard is a magnificent hater and she will do whatever it takes to kill off enemies that threaten her Prime Ministership. Abbott is firmly entrenched at the top of her enemies list.

Nothing is off the table when it comes to trashing Abbott and Gillard has witnessed the fruits of her relentless venom. As a result Abbott has become, and remains, unpopular.

But he who has the camera calls the tune and I didn’t notice any cameras following Abbott to Cape York or risking being caught in fire-storms. Oh, no… the Julia-infatuated media were more interested in doggy pics, knitting and what she and Timmy cooked for Xmas dinner.

Gillard hated that she was forced to follow in Abbott’s footsteps when she inspected the fire damage.

Abbott will keep doing what he believes he needs to do and Gillard will keep trying to negate or belittle it.

Let’s face it, Abbott is permanently on a public relations exercise and he needs to be because of Gillard’s relentless, and mostly unjustified, attacks on him.

Gillard’s Achilles heel remains her poor judgment and it was poor judgment to parachute Peris into a Senate seat at the expense of an ALP sitting member.

There seems no valid reason for such a party-destructive move other than that it was worth it to undercut Abbott’s commendable work with indigenous communities.

…she really is a piece of work.

NOMINATIONS FOR TRIVIA and WORD PRIZE for 2016