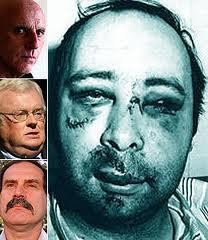 [While the graphic photo of the bruised and bloodied face of left-wing Labor MP Peter Baldwin has remained etched in the public conscience since his bashing 25 years ago, those responsible have never been brought to account.

"Now, Joe Meissner, one of the central figures in the controversy, has broken his silence. Meissner, an importer as well as one of Australia's top-ranked poker players, claims it was suggested to Tom Domican that Baldwin be 'fixed up' and it developed from there. Meissner claims that Domican organised two associates to do the bashing.

"When asked who had suggested this to Domican, Meissner replied: "Who else, our good friend Graham Richardson. Ask him."]

The perfect cup of tea

JULIA, LANCE… ON YOUR BIKES!