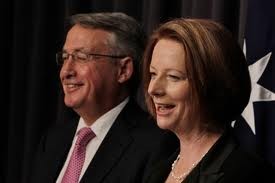 Don’t these socialists have any idea of commercial decision making processes? There is a responsibility to shareholders. If a tax on their product can be legally avoided they will either choose to avoid it or get kicked off the Board at the next AGM.

Let’s not forget the mess that Rudd was making of the proposed mining tax was the very same reason Gillard gave for assassinating him. Under Rudd, “we have lost our way”, she said.

Under the far more intelligent administration of Swan/Gillard we have not only “lost our way”, we have lost any mining tax our forward expenditure was predicated on.

We have also lost our 2012/13 budget, Gonski, the NDIS, the dental scheme, the NBN, hang on, I forgot NBN’s $43 billion is off budget (sort of pretend money) but we’ve certainly lost our borders, all credibility and we’ve lost the next election.