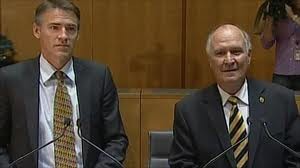 There is much gnashing of teeth in New England and the North Coast. Both men, when you scratch the surface, are Labor men but the deal they did with Gillard was against the tide of their electorates’ wishes.

They now need to consider how they want history to view them. They do have an “out”. But will they use it?

The deal Gillard hatched with three Independents was entirely unnecessary, as was the deal with the Greens. Abbott was beguiled by the possibility of moving into the Lodge and the Independents played him off a break with a view to embarrassing him, and they did that with venomous alacrity.

It became clear that Oakeshott and Windsor had been misleading their electorates all along. They were posing as conservative Independents when they were Labor through and through. It was simply an opportune time to screw Gillard for $1.4 billion and embarrass the hated Catholic, Abbott.

Terms of the signed Agreement with Gillard have not in any way been adhered to. The Agreement was a no more than a publicity stunt to showcase Gillard’s “negotiating skills”.

Condition 2.1 (a) was the pursuit of “transparent and accountable” government and Condition 4.4 Standing Order 100 be altered to ensure answers to Questions are relevant and that an “independent” Speaker ensure the Opposition is not impeded in holding the Government to account.

These and almost all conditions of the Agreement, signed by Swan and Gillard, have either been ignored or varied out of all recognition.

Windsor said he had “opted for stable government”. Australia has been served up anything but stability.  So the Independents, including Wilkie, have ample grounds for reneging. But will they?

Windsor has said the AWU/Gillard scandal is all nonsense and, “we should get on with governing”.

The truth is Oakeshott and Windsor would rather go down with the ship than align with a conservative government and that has always been the case.

Gillard has been shown to be a corrupt liar whose word can never be trusted. She has been shown to have been complicit in millions defrauded from union members. She had no compunction in knifing a sitting PM only two days prior she was declaring her loyalty to.

Such a flawed character holds no concern for Oakeshott and Windsor. They are regularly spat on as traitors by those who elected them.

But they will hang on to the bitter end not because they are true Labor men. True Labor men are sickened by Gillard.

They will hang on because of their hatred for the Catholic, Abbott.

History is bound to view them poorly.

OUR PRIME MINISTER IS A CROOK Part IX …and now it’s...

THE MENACE OF TERRIFYING WHITE SUPREMACY IS ON THE RISE