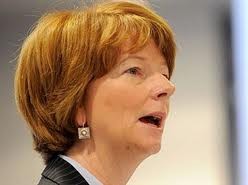 Most university radicals eventually mature. Most, when they emerge from the dull grey halls of self-indoctrination, lose contact with the communist fringe.

Members of these small, extreme Left groups usually disband, marry, have kids and embrace the reality of an urbane life. They merge into society as productive members and they look up old uni mates for

a drink and a laugh at the ill-conceptions of youth.

Not so with Julia Gillard.

She nurtured the dream of many a uni communist and now she is actually living it.

Gillard is a volatile mix of extreme Left ambition and modern political treachery. She has actually been able to realise the main plank of her beloved “Socialist Forum”.

The main plank in her manifesto? To infiltrate the Labor Party in order to implement the policies of the radical university Left.

Gillard convinced her parents to join the SA Communist Party as she continued to espouse the most outrageous of policies in her “Year of the Lesbian”.

Her unabashed policies included the denunciation of marriage and included her referral to married women as “prostitutes”, late term abortions, university heterosexual relationships were denounced as inferior to lesbian relationships and were to be discouraged, etc etc…. the veritable bucket list of a lunatic idealogue.

Maxine McKew in her book has simply confirmed what most of us already knew. McKew, as an ABC radical, was no shrinking violet herself. She was happy to link arms with the crusading Gillard girls and join in a devastating sortie on traditional Labor and its values.

But unfortunately Gillard saw McKew as the one-term wonder she was and therefore she could not occupy a permanent place in the grand plan.

McKew was spurned by Gillard as an irrelevancy, she considered she had greater value promoting the cause through the ABC, not in the front line where much blood was yet to be spilt.

The Gillard girls could never have won Office in their own right. They were battling to win office in the union movement. But they could support a popular, factionless fool like Kevin Rudd into Office. As soon as Rudd was elected, it was “game on”.

Rudd didn’t have the slightest idea what was going on behind his back. How could he have? He had no support from within the union movement, no-one to watch his back.

When the AWU’s Bill Ludwig anointed Gillard in 2009, the numbers were in place and it was all over for Kevin. He was a dead man walking from that time on.

Albanesi and others tried to warn him of an impending assassination but an oblivious Rudd was confidently secure in Gillard’s constant declarations of loyalty.

When Gillard finally plunged the knife into Kevin’s back he crawled, fatally injured, to his old Caucus supporters only to realise they were no longer there. The coup had been executed with seamless precision.

Gillard justified the assassination, declaring she had a momentary epiphany that Labor had "lost its way", but Labor was now terminally split and about to be led by Gillard into oblivion.

Gillard quickly morphed from a scraggy, unkempt radical in a man’s suit into a publicly acceptable well-dressed woman. Her previously scorned lipstick and eye shadow suddenly became the acceptable norm.

She and the Gillard girls were on their way and an unlimited supply of public funds awaited them.

Many tears were shed by true Labor men, but they cried for their Party, not for Rudd.
Rudd’s tears were for himself alone.

Gillard believed her dark past was lost in time and it was full steam ahead, until a little guy by the name of Glenn Milne stumbled on a story that could possibly bring her government to its knees.

The momentous nature of the story was equalled only by Gillard’s hysterical response to it. No Prime Minister had ever demanded the CEO of a major national newspaper spike a story, let alone under the threat of disclosure of Press phone hacking.

Her level of “incandescent” rage was indicative of the story’s ability to destroy her regime.

Gillard’s lack of commercial common dogfuck was evident. Her hysterical reaction to the mention of the name “Bruce Wilson” sent alarm bells ringing in the offices of conscientious journalists.

Other would-be journalists were far too busy avoiding the retrenchment axe to run with a story as dangerous as this.

IS A DELUSIONAL LITTLE DEMENTED TURD ABOUT TO MEET HIS MAKER?