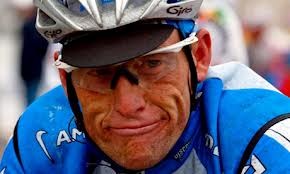 It appeared the presenter didn’t understand the difference between “doping” and performance enhancing drugs. The viewer was left in the dark. Also the presenter did not even explain how Armstrong evaded detection.

Unusual for the normally comprehensive 4 Corners.

Contrary to what 4 Corners said, doping is not merely the infusion of the athletes own blood, it involves the separation of the haemoglobin from the plazma. That’s the whole point. Unless there is a ‘sedimentation’ process, infusing an athlete’s own unseparated blood would be pointless.

Oxygen-carrying red blood cells, produced by the bone marrow, are utilised for increased performances in an athlete.  Blood doping has been used for 50 years and it will never be detected. No enhancing drug is involved. It is the natural property of the athlete.

But physical blood doping is cumbersome and timeous, therefore the substance Erythropoietin (EPO), which regulates blood cell production, has been used as quicker, cleaner and more effective alternative. But EPO is also naturally produced by the kidneys.

Steroids and corticosteroids are also naturally produced in small amounts by the body’s adrenal gland. Team doctors instructed athletes to inject these substances in small amounts and not above the threshold of what would be produced naturally.

To inject these substances an “agent” is required in the form of either an oil or aqueous base. An aqueous base cannot be detected as it is simply water. The more effective oil base should not used as it is a foreign agent and very detectable.

So the athlete is left with the aqueous base and strict controls as to amounts. Smaller amounts, more often, but always within the limit of what the body will naturally produce and within a certain window of a testing period.

If Armstrong and his team followed doctors’ instructions they could never be caught. They could straight-face declare they had never taken drugs because, well, actually they hadn’t. Only the “agent” was detected. Everything else that was injected was found naturally in the body anyway.

EPO is used to combat testicular cancer and Armstrong had a possible escape chute of last resort. Regardless, the International Cycling Union (UCI) knew exactly what was going on. But there were billions of dollars in endorsements involved.

Anyway, in Armstrong’s case his donations of millions of dollars to those doing the testing eased the tension for a while.

Armstrong might never have been caught if it weren’t for archived urine samples. Increasingly sophisticated detection development can catch up with old crimes.

Many people are in jail now because of mitochondrial DNA detection in old samples. It is not a matter of what you can get away with now, it’s what they can discover in future.

SHORTEN A CHAMELEON FOR ALL SEASONS